A few years ago, after an overdose of David Eddings, I made the following mental note:

Never purchase a book that has a map inside the front cover and is part of a trilogy.

This has doubtlessly caused me to miss out on a lot of good fantasy books. The fact remains, however, that most fantasy maps are pretty dreadful. Some gripes:
[ul]
[li]Many of them don’t look anything like real maps (more often than not they’re just a big blob-like landmass with some trees and vagely mountain-like thingies drawn here and there). Look at a map of Europe instead - nothing blob-like about that.[/li][li]Despite the convenience of a ruler, coasts and rivers do not usually follow straight lines.[/li][li]Large cities cannot survive in a wasteland (not at any rate without a water source and access to a trade route).[/li][li]Mountains cannot be crossed without passes.[/li][li]Forests usually don’t grow in the middle of a desert.[/li][li]Rivers flow downhill, not the other way around.[/li][li]There seems to be a habit of making too few cities and villages and placing them too far apart.[/li][li]The place-names for places that aren’t important to the plot are often unimaginative. Just how many “Forests of Darkness” can you take?[/li][li]Little cherubs puffing ships around and things like ‘Here be Dragons and other Nameless Beasts’. Puh-leeze.[/li][/ul]
I could go on.

Was Tolkien the person who started this, or is it an old tradition?

Is there any good around fantasy writer around who is also a good fantasy mapmaker?

Who makes the best maps?

Tolkein may have been the first, but the maps were added to LOTR primarily for him to be able to get copyright back in the U.S. The original editions did not have them.

I like the books where you can look at the map and trace the path of the adventure. The Sword of Shannara is a prime example. You can practically see the world being made up as they went along.

I once had the idea of writing a fantasy book starting with plate tectonics. That is, I started by having two continents crash into each other and drew the resulting landmass. Then, based on what I could glean from an atlas, added in geographical features where I thought they’d make sense. Then I was goign to figure out where, based on these features, people would be most likely to settle and that sort of thing. I was going to then create legends and stories and eventually tie it all into a single work, but I got tired of the project just about the time I was mapping out the geographic features.

The Chronicles of Narnia had maps included that were described by C.S. Lewis and created by the illustrator. They make pretty good sense, with mountain ranges about where they should be in order to make the other landforms work (seperating forest from desert, for example). All the rivers flow down to the sea, and there are realistic peninuslas and such as well. The critters that appear on the map are usually mentioned in the books, to boot. There does seem to be a dearth of urban development in Narnia, though…

I found a copy of the map at the offical website: http://www.narnia.com/travelhome.html

Little cherubs puffing ships around and things like ‘Here be Dragons and other Nameless Beasts’. Puh-leeze.

This is in imitation to medieval (? old anyway) maps. Its supposed to look Olde Worlde.

There’s a scene in Pratchett’s Moving Pictures about that. Two wizards are looking for Holy Wood on a map and the narration explains that mapmakers tend get so caught up in ornamental work that they leave off the rivers.

“Look, it says, Here Be Dragons, right in the city!”

“What about these, Terra Incognita?”

“It’s better than fifty miles of cabbage fields, I suppose.”

“And here’s Here Be Dragons, again.”

I’m not much of a reader of ther Fantasy/Sci-Fi genre, but the one book that sprang to mind when hearing your rule (“Never purchase a book that has a map inside the front cover and is part of a trilogy”), and which blows your rule out of the water, is: Frank Herbert’s Dune.

That map seemed well thought out, as geology goes. And I found it indespensible to the story. That and the glossery, and history indecies in the back. Although, I must admit, Dune is the only Herbert I’ve read. I don’t know if the rest of his works lives up to my excruciatingly tough standards.

*Originally posted by aegypt *
**
Was Tolkien the person who started this, or is it an old tradition?
**

The Lord of the Rings maps actually look a great deal like real maps produced by the well-known 16th century cartographer Sebastian Munster. With his background in history Tolkein would almost certainly have been familar with this particular style of map and may very well have used it as a model.

Here’s an example of Munster’s work:

Don’t forget the map of the Known World During the Hyborean Age, as seen in the front of every Conan novel by Robert E. Howard.

Has anyone noticed that Tolkien’s map actually has some interesting similarities to the geography of Europe?

Here’s a projection of Middle Earth overtop of Europe.

I wonder, do North American fantasy writers’ maps tend to echo their own geography? I’m a hard sci-fi guy myself, so Tolkien is about as far as I go.

What I hate is when the map doesn’t match the story - i.e. the rivers are in the wrong place, the coast is not facing the right direction, and the forest is a lot smaller than is described.

And either name everything that appears in the story, or don’t bother with the map in the first place! When you get down to it, readers don’t need a map, it’s not really that crucial to follow a plot.

As someone who enjoys studying maps (hey, it’s a guy thing! ;)), can I recommend Ursula Le Guin’s maps of the archipelago in the Earthsea trilogy? They’re pretty damn good, cartographically(?) speaking, and very pertinent to the story & the characters’ voyages therein.

IANAFR (fantasy reader) but the first book of the trilogy is still my favourite book.

I’d almost forgotten about the Earthsea map. Yes, it’s very beautiful. I remember looking at it as a child in a book called The Dictionary of Imaginary Places.

For those of you who haven’t read the Earthsea books, here’s a link to the map: 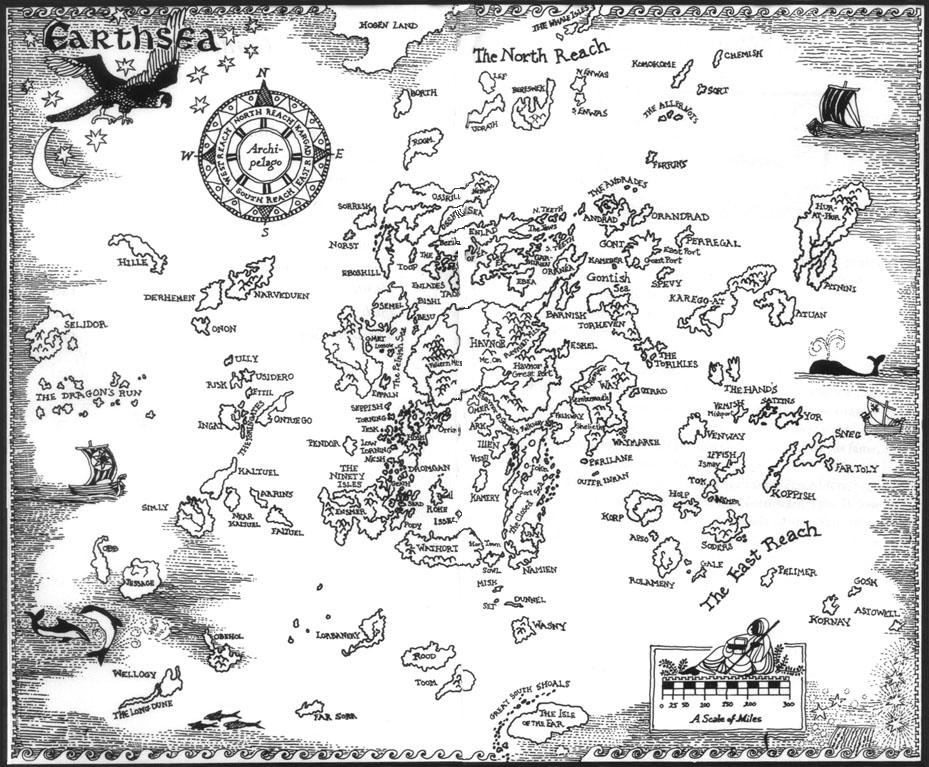 I too enjoy maps with my stories (I’m just a map fan).

However, the mapmaker appears not to have read the final draft. The map refers to a cluster of stars as “the Golden Chalice” while every reference in the book is to “the Golden Pitcher”.

The wonderful Earthsea map is a great one and I can remember poring over it while reading the series.

I’ve always have something of a fascination with maps, both real and imaginery. A quote from Heart of Darkness on maps has always appealed to me:

"Now when I was a little chap I had a passion for maps. I would look for hours at South America, or Africa, or Australia, and lose myself in all the glories of exploration. At that time there were many blank spaces on the earth, and when I saw one that looked particularly inviting on a map (but they all look that) I would put my finger on it and say, ‘When I grow up I will go there.’

Of course, when I was growing up, there weren’t really any blank spaces left, but I felt much the same way. There’s just something about a map that implies adventure, the exotic, and wonders to behold (unless I’m looking at a road map of Pennsylvania).

Having said all that, there are some pretty bad maps in fantasy literature. I don’t remember Edding’s maps very well, but I do remember not being very impressed with the maps in J.V. Jones’ books. Still, given a choice, I’d always prefer to have a map (though obviously good ones are prefered over bad ones); I enjoy looking up places the characters travel to and seeing the path of their movement.