I was just listening to the dramatization of the new Hitchhiker’s Guide BBC audio dramas (Tertiary, Quandary, and Quintisential phases), and it occured to me that out of all the robots i’ve seen/read in various sci-fi shows, whether it’s Bender, C3P0, R2, Calculon, Acting Unit 001, David Duchovny, Al Gore (sorry, couldn’t resist

) the Iron Giant, and others i’m sure i’ve forgotten, i always gravitate back to Stephen Moore’s rendition of Marvin the Paranoid Android, as my absolute favorite robot

i mean, i can’t help feeling for the guy, here he is, brain the size of a planet, saddled with an incurable terrible pain in all the diodes down his left side, he’s 37 times older than the universe itself, and nobody pays him any respect or listens to the poor guy (well, maybe aside from the small rat in his right ankle, but i think it may be dead by now…)

he’s like a depressed, metal Rodney Dangerfield (or as Douglas’s wife put it, a more metal Eeyore), he gets no respect…

if i had to list my top 5 robots, it’d probably go as such…

1; Marvin the Paranoid Android (Stephen Moore’s voice, and the original “Tin Can” costume, to me, that is the quintessential Marvin)
2; Movie Marvin (Warwick Davis inside the “tin can”, Alan Rickman as the voice)
3; Bender “Bending” Rodriguez (Bending Unit 22)
4; The Iron Giant
5; Gus from Tripping the Rift, an obvious rip/parody of C3P0

Robbie the Robot - Forbidden Planet, The Invisible Boy
The proverbial butler mechanized, that classic monotone voice, engineering that made you believe he was real.

Robot - Lost in Space
Similar in nature to Robbie, a servant of man and that gullibility, ya gotta love 'im. And just another great, effective design. 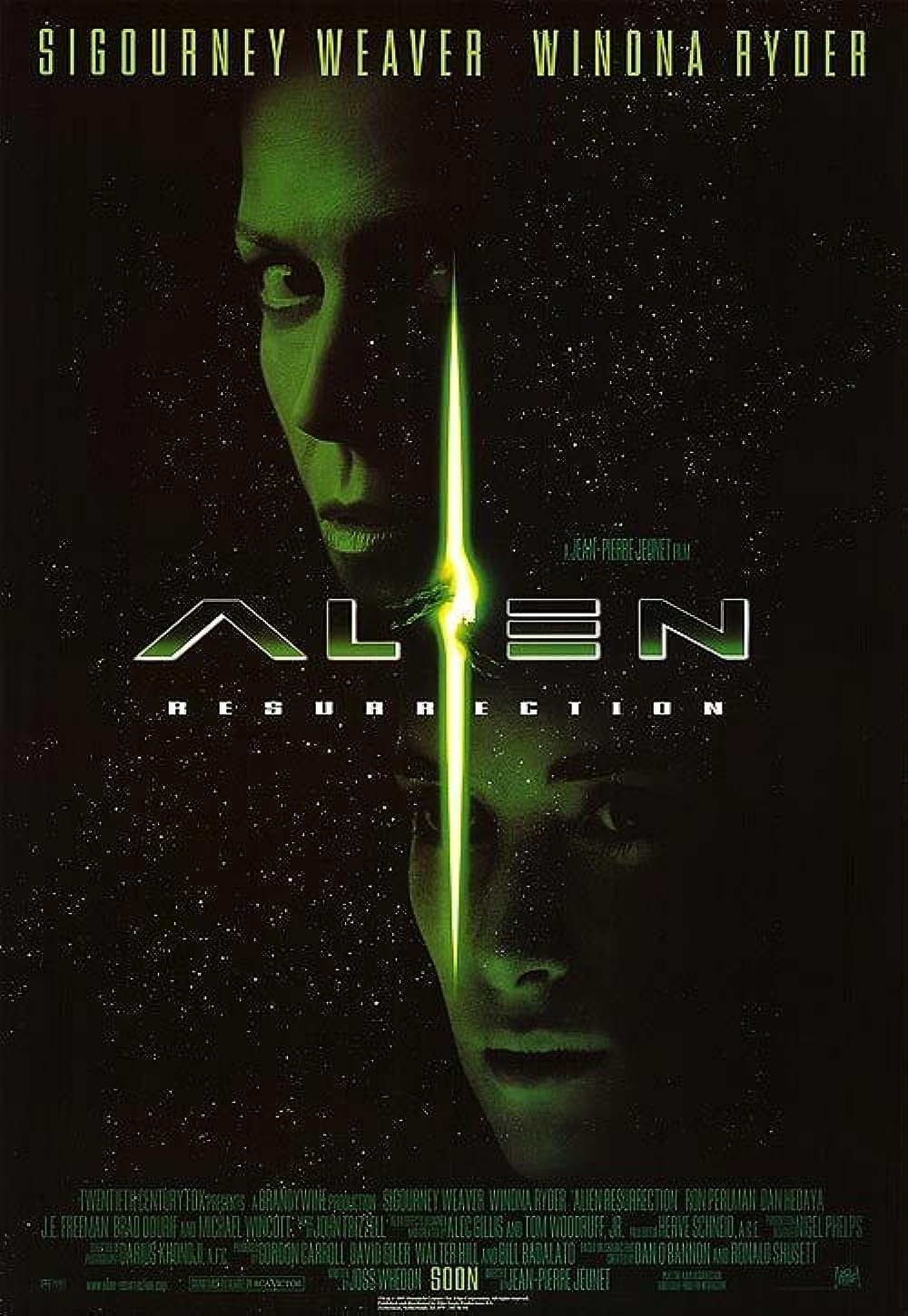 Alien: Resurrection: Directed by Jean-Pierre Jeunet. With Sigourney Weaver, Winona Ryder, Dominique Pinon, Ron Perlman. 200 years after her death, Ellen Ripley is revived as a powerful human/alien hybrid clone. Along with a crew of space pirates, she...

and(not sure if this one counts, so sue me)
The Tin Man (Wizard of Oz)

Does the Shrike (A.K.A the Lord of Pain, from books by Dan Simmons) count as a robot? If so, he has my vote.

In no particular order :

Gort, from* The Day the Earth Stood Still*.

Another vote for Robbie.

I’m not sure if they fit the OP, since they are non-humanoid and a class rather than an individual, but I like Keith Laumer’s Bolos and Sabrehagen’s berserkers. Bolo’s are nearly unstoppable sentient tanks, programmed with the ultimate “noble warrior” mentality and armed with firepower measured in megatons per second. Berserkers are ancient war machines programmed to destroy all life.

Hammerstein and Joe Pineapples (a transvestite robot assasin!) , hell, all the ABC Warriors

the Raums from the brilliant, unheard-of Manx TV series Space Island One

The unskinned, skeletal terminators in the flash-forward scenes in T2

Hey, why no love for TWIKI?

I think my favorites have been noted, but, just for the heck of it:

Robby from Forbidden Planet, then in lots of other places for many years. The first robot without a real “face” (although they tweaked it for the poster, so that he looked kinda evil). Obeyed Asimov’s three laws. And he wasn’t just a metal person, as so many robots are. A lot of the humor in FP resulted from Robby’s acting in what seems to be a human manner, but is strictly defined by his programming. Although I suspect Morbius prgrammed him with a bit of humor. Plus, he has an emergency override command – you gotta love a robot with a Safeword.
Gort – Gort still looks impressive, over half a century later. Menacing and convincing. Gort doesn’t obey Asuimov’s laws, but he’s one of the few robots that has a logical reason not to.

Maria/whatever – from Metropolis. AFAIK, the first robot in cinema history, but so absolutely perfect you wouldn’t guess it – sh looks great, with her metal exterior with odd protrusions of no obvious purpose (ages before 2001 gave us spaceships with odd protrusions) and with her slow and dignified walk.

Andrew from Bicentennial Man – So sue me. Everyone hates this movie, but it feels more like Asimov’s writing and more like SF writing than mainstream sf dreck than almost all other films out there. Andrew looks great – just what a human-appearing-for-no-other-reason-than-peopkle-expect-it robot oughta look like. The emphasis is on the robot and his development more in this film than in any other.

Tom Servo, Crow, and Gypsy – they make no sense as robots in any sf sense, but I have to include them. If Robby had been programmed by the gang at Best Brains, this is how he’d turn out. (“You understand the mechanism?” “Yes, Morbius. A Simple Blaster.” “OK, now come over here. Point it at the Commander. Aim right between the eyes.” “How about if I aim right between the legs?” “No, Crow, we don’t want to go there. Just try to wing his ear.”)

Gnut, from the Harry Bates story “Farewell to the Master” (later filmed in much altered form as The Day the Earth Stood Still). Indestructible, unstoppable – and more civilized, wise and noble than the humans who tried to destroy him. Best of all, he was Klaatu’s master, not the other way around.

The lovesick vacuum cleaner from Robert Sheckley’s story “Can You Feel Anything When I Do This?”

And, of course, Joe, the nacissistic cybernetic beer can opener in the Gallagher stories by Lewis Padgett (the team of Henry Kuttner and his wife C.L. Moore). (Funny; they saw a future with intelligent robots, automatic aircars and 3-D television, but not self-opening beverage cans.)

You don’t specify movies only so I want to nominate R. Daneel Olivaw. I really have to buy Asimov’s robot books again. It’s been so long since I’ve read them…

The first vote for ED 209 from Robocop. He’s got no hands/claws/grapplers just a minigun and rocket launchers

. And he does not obey Asimov’s laws, at all. More or less the opposite.

It’s possible the The Iron Chicken is a robot, she certainly looks mechanical. And the Clangers had to re-assemble her after they shot her down***** which suggests she’s a very sophisticated machine not an organism.

So, those two plus Marvin, Bender and Robbie.

Definitely not and Star Wars robots, they just piss me off. The Silent Running 'bots were cute. C3PO is just annoying.

Do replicants count as robots?

*****accidentally, with a big firework rocket, the Clangers would never do something like that on purpose.

Hmm – I was thinking movie robots, from the earlier responses. They’re still pretty good, but Baldwin’s choice of Joe from the Kuttner/Padgett “Proud Robot” stories would have to be included.
There are a lot of robots I like from sf literature, but I don’t have their names on me…

The fallen robot from Laputa: Castle in the Sky.

No. May I suggest a Celebrity SciFi Robot Deathmatch:

Twiki vs. ED-209
Or we could lock him in a room with Marvin.
After we’ve had Bender get twentieth century on his shiny metal ass.

Okay, to round out my top ten:

Sure, in other Celeb. Deathmatch matchups…

a Frogstar Battle Robot
The Iron Giant in full Battle-Mech mode
ED-209 (good choice, BTW)
T-1000
a Borg Drone
Johnny 5 (in BattleMode)
the OmniDroid 10 from The Incredibles
(as a side note, i’d have loved to see one of the OmniDroid prototypes bear a passing resemblance to the Iron Giant…)
a Gremlin

and for sheer annoyance factor, lock him in a room with Gus, C3PO, and the original Lost in Space robot

Does the Shrike (A.K.A the Lord of Pain, from books by Dan Simmons) count as a robot? If so, he has my vote.

I thought he was more of a golem then an actual machine, but yeah he kicks ass.