Yup–had my physical today in the hospital complex here in Bozeman. The guy behind me was unmasked and when offered one (they’re mandatory) stated “I DON’T PLAN TO WEAR A MASK!” And therefore did not enter the hospital. I commiserated with the poor woman at the door on the way out and all she had to say was “it’s tough.”

Yup. I was at a doctor appointment a couple of months ago, and a woman in the lobby declined to wear a mask. The receptionist then told her, “If you won’t wear a mask, the doctor will not see you in person. You can make an appointment for a video call with him.” She ended up putting on the mask.

Because assholes gotta be assholes I guess. They’re not content to simply be an asshole at home.

There is a custom wig making shop in Phoenix that requires masks because their client base tends to have compromised or non-functioning immune systems. The protests and outrage from maskholes did result in some very good publicity for her client base, but I understand it was very unpleasant for the owner.

Image isn’t showing in your post, but if I open the link in another tab, it displays OK.

Yeah, I see that with a lot of pics that people post here. So, everybody: If you just see a big empty box where a pic should be, try clicking on it and it may open properly in a separate tab.

When we’re ready to get serious – I mean really serious – about shit like this, it should be made a citable misdemeanor offense (“disorderly conduct”) for merely making a scene like this. Except aboard airplanes, where it should be a capital offense.

At my gym. a woman with her mask below her nose hopped onto the treadmill adjacent to mine. This is the third time I’ve seen that at the gym, and the staff has obviously been instructed not to interfere (probably for their own safety). I stopped my machine and got on the next one down, but I was ticked. I had my bluetooth headphones on and faked a phone call, where I told the imaginary caller they weren’t interrupting my workout because I’d had to change treadmills because a woman had her mask on below her nose. After I’d spent a minute or two discussing COVID with my imaginary caller, the woman abruptly left the gym.

I’m pretty tired of the idiots and assholes holding the sane of us hostage so they can do whatever they want to.

Well, if they get to do whatever they like then you do, too. Like piss on their leg f’rinstance.

… a guy waiting for his prescription sat down in the tiny waiting area, pulled out a hamburger and fries from his backpack and set it all up on the chair next to him.

This is bad form even when we’re not in the middle of a pandemic. You don’t just set up and eat any old place you feel like, especially in a healthcare setting. Staff should have tossed him.

Well, yes, there are organized groups of anti-vaxxers who, as a group, invade stores and restaurants and refuse to leave, unmasked. I don’t know what they’re expecting the stores to do if they’re following governmental mandates

This is bad form even when we’re not in the middle of a pandemic. You don’t just set up and eat any old place you feel like, especially in a healthcare setting.

I remember reading about how microwave popcorn was banned at the Mayo Clinic because a lot of people there were on 24-hour fasts.

Call the cops and have them ejected for trespassing. Even if it’s not a government mandate, the protestors are obviously not customers.

Good luck with that. Unless the maskhole is actually physically assaulting someone, most of the time the cops will make us serve the customer to get them out of the store.

Call the cops and have them ejected for trespassing. Even if it’s not a government mandate, the protestors are obviously not customers.

Why would the protesters want the establishments to call the cops?

Somewhat amusing thing happening in Alberta with the numb-nuts who were protesting in front of hospitals, sometimes blocking access, spitting on nurses and denying that Covid was a thing:

It seems that in 2020, the Conservative government passed the Critical Infrastructure Defence Act which was intended to defend important things like pipelines and other oil extraction infrastructure from those dirty leftist hippie protesters. Well now the government has put hospitals into the same “critical” category as pipelines. Which means that any asshole protester at a hospital can now be hit with a MINIMUM fine of $1000, and up to $25,000 and 6 months in jail.

“Not fair” cry the people who voted for the clamping down on protest party. 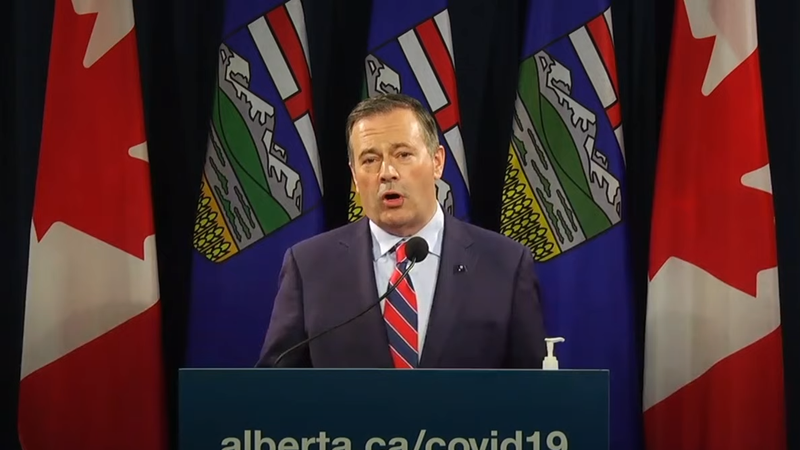 LETHBRIDGE, AB - The Alberta Government is taking steps that it says will keep healthcare workers and patients...

Logic is not their strong suit. "Hmmm. If we go to that place and make ourselves pests about their Commie mask rulz, they’ll repeal them and we win!!1!’

“Not fair” cry the people who voted for the clamping down on protest party.

“Those leopards weren’t supposed to eat my face!”

I just have to point out, Alberta nurses are likely to go on strike soon, so Alberta may be just as easily aiming this at nurses as covidiots.

With my daughter being in college to be a nurse… she’s fully vaxxed as is her roommate. Pay has never been a reason for her. Her brothers make more money doing “trade” stuff like my husband (their boss).

I have to say, proposing a pay cut to nurses in the middle of a pandemic which has stretched our hospitals and their staff to the breaking point, is probably the biggest “WTF?” moment of the whole pandemic.

I mean, if I bend my brain the right way, I can comprehend why some people might think some of their stupid crap makes sense, but this one? Nope, can’t bend my brain that far. How does a proposal like this even get made, let alone become an actual policy, even for a short while? How did the first person to propose it not get beaten about the head and shoulders by everyone else around him as soon as they said it?

I mean, even if you’re ideologically committed to cutting as much spending as possible, and also believe that nurses are ridiculously over-paid, you have to at least realize that this suggestion is a complete non-starter for an overwhelming fraction of the populace, right?