…inside a cigar box in Scotland.

Let that be a lesson to you. Always look inside old boxes when you’re cleaning. You never know what you’ll find.

I’ve been wondering about these relics for years, ever since I read about them in a book on the Pyramids. It occurred to me that it was a rare case of something from the Pyramid that could be radiocarbon dated.

Late last year, curatorial assistant Abeer Eladany was reviewing items in the University of Aberdeen’s museum collections, when she came across an item that didn’t seem to belong.

Eladany, who is originally from Egypt and had spent a decade working at the Egyptian Museum in Cairo, noticed the country’s former flag on an unassuming cigar box. She opened it up to find small pieces of wood inside – and, after cross checking it with museum records, realized she had stumbled upon a lost artifact from the Great Pyramid of Giza, the centerpiece of an enduring archaeological mystery.

Only three objects have ever been recovered from inside the Great Pyramid – a trio of items known as the “Dixon Relics,” according to the University of Aberdeen.

“Once I looked into the numbers in our Egypt records, I instantly knew what it was, and that it had effectively been hidden in plain sight in the wrong collection,” said Eladeny in a press release from the university.

“I’m an archaeologist and have worked on digs in Egypt but I never imagined it would be here in north-east Scotland that I’d find something so important to the heritage of my own country.”

The relics were first discovered in 1872 inside the pyramid’s Queen’s Chamber by engineer Waynman Dixon. He was assisted by his friend James Grant, a graduate from the University of Aberdeen; their discovery of the relics, according to the release, was widely reported at the time.

Dixon took the ball and hook, and Grant took the piece of wood, the university said. After Grant’s death in 1895, his collections were bequeathed to the university, and his daughter donated a “five inch piece of cedar” in 1946.

But because the piece was never properly classified, it stayed hidden for decades despite an “extensive search,” until Eladany accidentally discovered it in the Asia collection.

They had the same thoughts about carbon dating:

The process of radiocarbon dating has revealed that the fragments are from around 3341-3094 B.C. – centuries before the construction of the Great Pyramid. Covid-19 restrictions had delayed the dating of the ‘lost’ cedar fragment, said the university. The larger piece of wood it originated from, still inside the Great Pyramid, was most recently seen by a robotic camera in 1993 and is now unreachable.

This suggests that the relics were original to the construction of the Pyramid, instead of being later left by those inside the completed Pyramid.

“It is even older than we had imagined. This may be because the date relates to the age of the wood, maybe from the center of a long-lived tree,” said Neil Curtis, Head of Museums and Special Collections at the University of Aberdeen, in the release. “Alternatively, it could be because of the rarity of trees in ancient Egypt, which meant that wood was scarce, treasured and recycled or cared for over many years.” He added that the discovery might “reignite interest” in the relics. 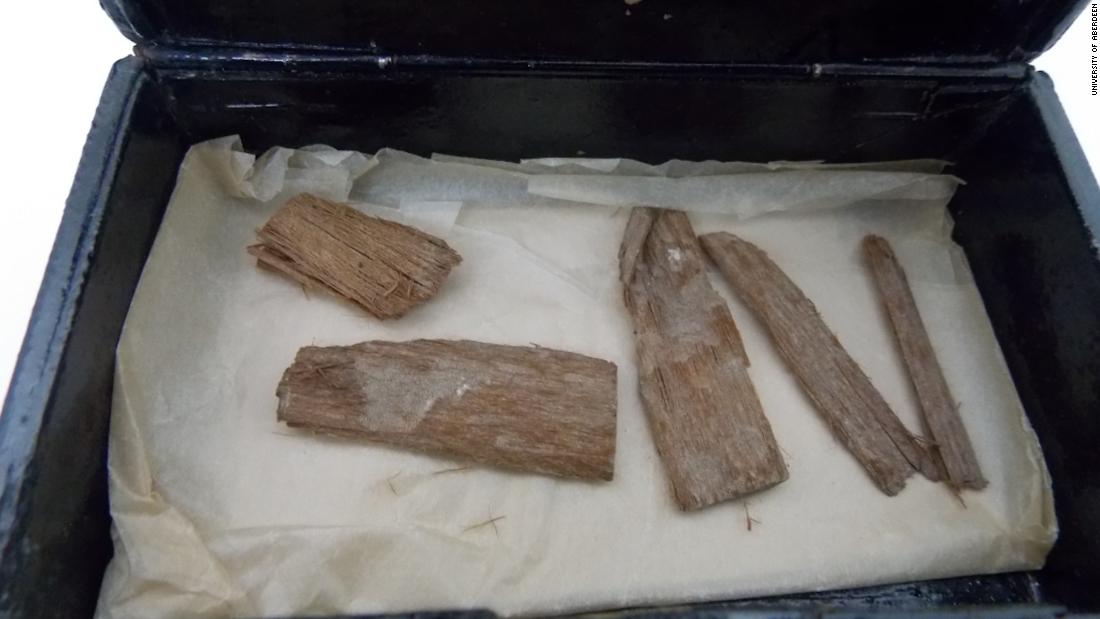 5,000-year-old relic from the Great Pyramid discovered in a cigar box in...

A lost relic, that could help reveal how the Great Pyramid of Giza was constructed, was found in the most unexpected of places: a cigar box.

The larger piece of wood it originated from, still inside the Great Pyramid, was most recently seen by a robotic camera in 1993 and is now unreachable.

** raises hand ** What’s this about a larger piece of wood that was seen by a robotic camera in 1993 and is not unreachable? What the heck happened, was there a pyramid-quake?

** raises hand ** What’s this about a larger piece of wood that was seen by a robotic camera in 1993 and is not unreachable? What the heck happened, was there a pyramid-quake?

Dunno. This is the first I’d heard of that

Those are older articles about the robot that went up the “ventilation shaft” of the Pyramid. It contains information about pyramid exploration, but not about the wooden artifacts recently re-located.