My first thread in Thread Games.

A hint: Three male, one female.

My first thread in Thread Games.

A hint: Three male, one female.

I wouldn’t call My So-Called Life a “long-running” show, but it had a regular character who was illiterate, Jordan, the boy Angela has a crush on.

I can think of several examples of Very Special Episodes, where a character was introduced for a single episode just to be revealed as illiterate, and then learn to read. I can’t think of a series regular who was truly illiterate, though. On The Cosby Show, the son was diagnosed as dyslexic as an older teenager, but before that he could read, he was just a very poor reader who struggled academically, not completely illiterate.

Are we talking US TV or British TV?

On the original Upstairs, Downstairs, Sarah, the under house-parlourmaid is fully illiterate at the beginning-- she can’t even write her own name. Rose begins to teach her to read at one point, well enough that she can read the intertitles at movies, and scrawl out an invitation to Rose to visit her in Deptford, although Rose says it looks like a child’s handwriting.

I can’t think of an example where illiteracy is played for laughs, except on King of the Hill, where it turns out the character isn’t really illiterate; his family just wants Hank to think he is, so he’ll pass him on a community work assignment, so he can play football.

Also, JJ on Good Times was sometimes called illiterate, but I’m not sure it was meant to be factually true, but rather a way for his siblings to taunt him. His grades were mediocre compared to his over-achieving brother, and his sister, who wasn’t quite as brilliant, but still a very good student. References to his dumbness were played for laughs, but he had his own niche talent (painting), so that made it somehow “OK.”

Manual on Fawlty Towers couldn’t read English, but I’m sure he could read Spanish, so I don’t think that makes him illiterate, although his language problems were definitely played for laughs.

On 30 Rock, the staff and writers suspected Tracy was illiterate, and he played along to get out of work, but he wasn’t really illiterate.

Are any of these what you are going for?

Walter Brennan’s character on the Real McCoys was illiterate. It was the plot for one of the shows.

I’m not sure of the status of Granny Clampett. I don’t recall it being stated. She was a doctor so hard to believe she couldn’t read or write

I’ve got some idea of more than one illiterate character from old westerns. Just no particular names or shows are lighting up.

A common plot for a Very Special Episode: A character, typically a friend or acquaintance of The Hero, is revealed to be illiterate by some odd quirk of behavior. This is typically a shameful secret to them; the episode typically ends with their …

There are several possibilities listed there. My So Called Life, Young Riders, Little House on the Prairie, Heroes, It’s Always Sunny in Philadelphia, and True Blood all are candidates.

In Downton Abbey, Andy is illiterate, but he’s not really a long-running character–he appears only near the end of season 5, and we don’t find out about his illiteracy until season 6, the final season.

Some more hints and clarification.

All four shows are American shows.

Three are shows that are no longer in production. One show is still ongoing.

One show has been mentioned, Little House on the Prairie. The character is not Laura Ingalls though.

None are small children, or special episode one-off characters whose only function was to be illiterate.

I’ve got some idea of more than one illiterate character from old westerns. Just no particular names or shows are lighting up.

Laura on* Little House *would seem to fit the bill as well.

Albert on Little House on the Prairie? Although I do remember a student who came to school who was illiterate and was a one-off character. I think Ma was substitute teaching and tried to help him. He was an older boy who’d never gone to school before.

Laura on* Little House *would seem to fit the bill as well.

No, not Laura. Not Albert either. As stated above, not a child character.

One is from Little House on the Prairie.

Of the three characters left, two are fully grown adults, one is young but not a child. Let’s say post puberty.

Mr. Edwards from Little House on the Prairie?

Here’s some commentary:
He apparently never went to school for reasons unknown and thus never learned to read or write and had to have others write and read things for him. (Episode 218: The Long Road Home), (Episode 212: His Father’s Son) 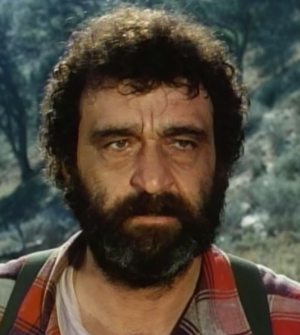 Isaiah Edwards (also known as "Mr. Edwards") was a Mountain man who first met the Ingalls family while they were living on the open prairies of Kansas and later settled in Walnut Grove. Edwards was a good but troubled man. He had many bouts with...

Verdie Grant Foster on The Waltons.

Mr. Edwards from Little House on the Prairie?

Here’s some commentary:
He apparently never went to school for reasons unknown and thus never learned to read or write and had to have others write and read things for him. (Episode 218: The Long Road Home), (Episode 212: His Father’s Son)
Isaiah Edwards | Little House on the Prairie Wiki | Fandom

One male, one female.

One show from the past. One show still making episodes.

Someone mentioned It’s Always Sunny in Philadelphia. Charley has been called illiterate, although it’s not quite clear that he can’t read at all, but he writes things using his own weird symbols.

I’m wondering if Tonto on the Lone Ranger was illiterate, I’m sort of hearing him say something like “What note say Kemo Sabe?”

I’m pretty sure that Ernest T. Bass was illiterate on the Andy Griffith show but I think there was some kind of ‘Ernest learns to read’ episode, and he was an infrequent character.

Another hint, neither remaining show has yet been mentioned in this thread.

Also, both speak English as their first language, although one speaks a second language.

Is Krusty bilingual? I don’t watch the show, but my husband I think once told me he spoke Yiddish. I never knew if he was kidding.

Is one character from Dr. Quinn, Medicine Woman? Googling suggests half the town was (realistically) illiterate, and while I didn’t watch it much, I did have a client who loved it, so I saw it more than I would have cared to. There were, IIRC, two semi-regulars, a reluctant prostitute and a former slave, both of whom one would expect to be illiterate at the time.

Ding ding ding! Krusty the Clown is correct! He does indeed speak Yiddish.

One left, female, young, illiteracy played for laughs, who is she?