Have you or those close to you purchased a firearm in the last 2 years? (COVID/Insurrection/Mass Shootings)

Figured it was time for a slightly different discussion on the whole firearm issue. Rather than debate how/whether/should firearms be regulated, I wanted to see if anyone here was a part of the new demographic - post-disaster first time gun buyers. Previously, I linked in several gun discussion threads that in the last two years, first time gun owners have made a unusually high percentage of firearms purchased. This started (arguably) with the BLM unrest, but transitioned/evolved further with COVID, and now accelerates due to the media attention to recent mass shootings (too many to list). A simple NPR piece on the issue from earlier this year for context. 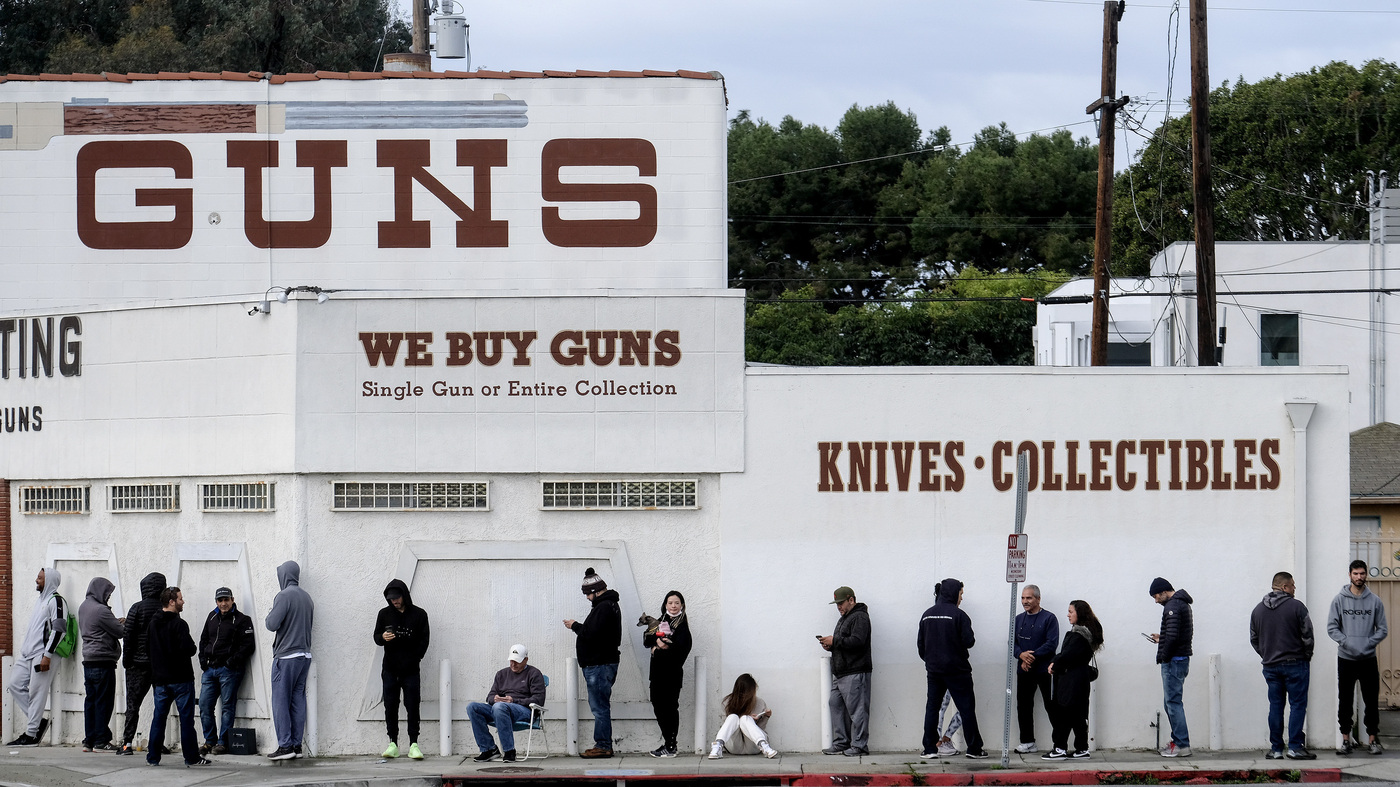 What is different here, and I’ll give a quote from the article above -

A 2020 survey by the National Shooting Sports Foundation, a trade association for gun retailers, ranges and manufacturers that lobbies Congress, said gun shop owners reported 40% of customers were first-time gun buyers from January to April 2020.

“Today’s gun owner looks a lot less like me and looks a whole lot more like America,” Oliva, who is white, said.

Most often, the first-timers are purchasing a semiautomatic handgun, outpacing the second-most-purchased firearm, shotguns, by 2 to 1, according to NSSF.

Is that we’re now seeing a much broader spectrum of gun ownership - sure there are plenty of Proud Boy wannabees and urban warrior types, but we’re getting POC and other non-traditional groups purchasing handguns in large quantities.

And I won’t deny in the current climate, they have reason to be afraid. With the Government still (IMHO) handling the insurrectionists with kid gloves, the Republicans doubling down on the Trump brand, and voter suppression tactics at an all time high, they may feel that the future is looking more violent rather than less, regardless of who may be in federal office.

For myself, the answer is no. My family has the Israeli branch who have all served and have access to firearms, the ‘liberal’ branch who don’t see the need although they feel well-regulated guns are, like abortion, a personal choice, and the In-laws, which are (largely) pre-Trump style Republicans. The second group doesn’t own and hasn’t bought guns, and the third group has plenty, just worry about the ammunition shortage.

I personally have a decent sized collection of purchased and inherited weapons and saw no reason to get more but did have some of the knee-jerk reaction of “I need more ammo!” largely because it became nearly impossible to replace any you used to practice with.

So enough MPSIMS, I ask are you, or anyone close to you a part of this phenomenon?

I purchased an new over/under shotgun last year for skeet/trap shooting. No I’m not part of the phenomena you’ve described.

I purchased a Beretta Tomcat .32 caliber semi-automatic pistol at a house auction just about two years ago. I bought it because it suited my needs (home defense), was small and I got it a good price (~$300). It was previously owned by someone who used it for the same purpose and as far as I could tell never fired it. I’ve fired on two clips when I first got it, don’t intend on firing it again unless I have to.

So no, I’m not part of the so called wave of gun buyers who need a weapon to feel secure. Just a homeowner taking a prudent step to defend his life and property at home.

So no, I’m not part of the so called wave of gun buyers who need a weapon to feel secure. Just a homeowner taking a prudent step to defend his life and property at home.

I don’t argue that isn’t a valid reason to purchase a firearm, and apologize if my OP made you feel that those people purchasing a firearm for the first time was as a security blanket, which was not my intent. I was saying that the recent events have certainly spurred a number of first time buyers who had previously not owned a firearm, as well as some of the reasons they may have done so.

So, rephrasing the question, Si_Amigo, was the .32 semi-auto you purchased the first firearm you purchased? Or is it more along the lines of several others I know, where they have long guns for hunting and sport, but purchased a handgun for ease of moving through a home in a defense scenario?

I had guns in my late teens for hunting, sold them all by the time I was twenty. Didn’t care for killing things and cleaning them. That was 40 years ago.

My dad died in 2000 and left me a .38 S&W service revolver, I’ve been using that but its kind of clunky. I do have license to conceal carry, got it just after dad left me the revolver. The only reason I bought the Beretta was because it was a very good deal as there were no gun dealers at the auction. So it’s the first gun I ever purchased outright. The others were gifts from dad.

I have never owned a gun, no-one in my immediate family owns one, and as far as I know none of us are even remotely considering purchasing a gun.

I’m not a first time gun owner but I did buy a new handgun with the first stimulus money. I was working all through the shut downs and it was just a bonus for me. I already have a pistol but it is more of a plinker, Ruger Mark III target. I wanted something in a handgun with a little more oomph than a .22 long rifle. Ruger came out with a new pistol last year in 5.7 X 28mm and I had been wanting one. The round, while not much bigger than a .22 is a lot faster, 1800 to 2000 feet per second, a bottle necked down bullet with a lot more powder behind it. It will tumble and do a lot of damage.

I love the gun, very accurate beyond what most handguns can do, low almost no, recoil, high capacity of 20 rounds per magazine, fiber optic green front sight that is very easy to point and shoot, and I just wanted it and hadn’t bought myself a toy in awhile.

And I stocked up on the ammo and boy am I glad I did. Ammo prices! The 5.7 x 28mm is now going for about $1.50 per bullet, per bullet if you can find it, which you can’t. So now I have a great new gun that I don’t dare shoot until the price and availability of ammo improves. I mean I still have more than 500 rounds, but still, if I shoot those will I find anymore?

Never wanted a weapon, never considered getting one, never intend to get one.

My youngest sister has a small handgun - I’m not sure why but whatever. As far as I know, no one else in my family or my husband’s family owns any firearms.

My parents, who are Republicans but never previously had any interest in guns whatsoever, bought a handgun last year near the height of the “Abolish the police” insanity.

(link included to head off the “They’re idiots, no one ever actually said that” brigade)

No and neither has anyone I know well.

No and I have no idea where to go to actually get one.

I have no idea where to go to actually get one.

I’m sure if wanted to find that out, several posters would oblige.

I have a home defense hatchet. Someone comes into my house with ill intent, they’re getting it embedded in their skull. They will never see it coming.

It sounds counterintuitive, but for FMJ works better than HP for .32. Fiocchi 73 grain seems best, but right now you take what you can find. Tomcats are cool by the way, I think that was a good price.

I got a new bird shotgun, already have some more suitable defense, so no.

Three new firearm owners in my circle of friends/family. All purchased 2020 and later. Two are very left-leaning politically and were formerly anti-gun until a frightening incident happened to them (they are roommates). Now they both have handguns and concealed carry licenses. The third is conservative and religious, but up to now had little interest in guns. An increase in local crime and a few serious incidents near his home changed his view. Like the others, a handgun and CCW license. IIRC, all of them bought Glocks, but I don’t know which model(s).

The experienced gun owners I know (hunting, friends, etc.) aren’t buying anything since prices are so high.

No purchases for me either.

The only folks I know who have bought guns in the past 2 years have purchased new hunting rifles, unrelated to self-defense.

Never purchased a gun, but own 12. All handed down to me.

And sort of depends on the definition of gun. I did purchase a high quality air rifle for target shooting 3 years ago. I have about $1200 invested in that. It’s a joy to shoot, more accurate than I will ever be, and no louder than a light clap of the hand.

I’ve been wanting to buy a new weapon, and more ammo, for several years. But whenever I get motorvated, someting happens and “those people” buy everything available. I want one of two specific weapons, and they’ve both been out of stock for at least six months.

And sort of depends on the definition of gun. I did purchase a high quality air rifle for target shooting 3 years ago. I have about $1200 invested in that. It’s a joy to shoot, more accurate than I will ever be, and no louder than a light clap of the hand.

Technically, an air rifle is a gun, but it’s not a firearm.