So I am strolling through the Roku channels, and on “B-Movie TV” I come across the tail end of some sort of charity video (I am guessing) that had a bunch of hair bands, including I think Quiet Riot, singing “We are staaaaars, we are staaaaars” over and over again, then finished up with photos of everyone that participated.
What was this? Hear 'n Aid was a charity record recorded by a large ensemble of 40 heavy metal musicians and released in 1986. The project was organized by Ronnie James Dio, Jimmy Bain, and Vivian Campbell, all from the band Dio. Proceeds from the album were used to raise money for famine relief in Africa. The 40 musicians which had been gathered together by Dio recorded the single "Stars" together; the rest of the album was filled out with eight other tracks, several of which were contributed by artists who...

Here’s a longer (47 minute) video about the whole thing: 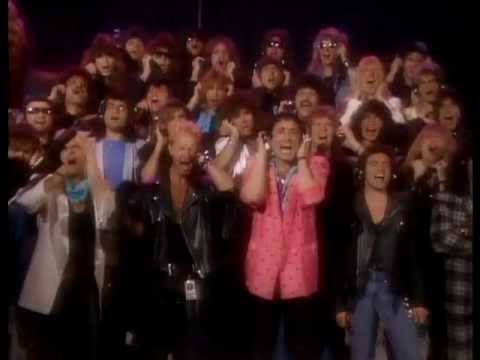 For what it’s worth, I’ve heard about this nowadays and could have come up with the answer if @Snowboarder_Bo hadn’t beaten me to it, but I’m pretty sure I was totally unaware of it during the 80s, despite being thoroughly familiar with the projects like Band Aid and USA For Africa that inspired it.