I would describe myself as an advanced beginner, or beginning intermediate acoustic guitar player. Rhythm, no desire at least for now to play lead. Now for guitar players reading the subject, I know a lot of thoughts have come to mind by the time you are reading this.

But I am not asking about brand or model, only color. It was always going to be between a Strat or a Tele. And of course there are pros and cons of each, and each can be used for any style of music. I like both rock and classic country equally, and have deciced on this Tele, as they say for country the Tele has a more “twangy” sound. Merle Haggard played one, that is enough for me. As does Bruce, although I read he has a Tele with a Squire neck.

Anyway, which color do you like, Amber or Red ?

Those are both gorgeous. I think that the amber lets the pattern in the wood show more; as much as I love red guitars, if I had to choose between the two, I’d go with amber.

Unusual to see a Tele without the knob plate. Those are nice guitars.

I don’t think I’ve ever seen one without that plate.

Amber. It will light better.

Yeah well, maybe I will soon be playing with some other people on a small-town Amateur night sort of stage. I first learned a few chords on acoustic in the mid-90s, but did not stick with it for more than a couple of weeks. I did this several times up to about 2010. Every few years I would pick up the guitar for a week or two, but never really got anywhere.

About a month ago I picked up the guitar again, and I have been practicing most days for half an hour or so, sometimes for a couple of hours a day. And I am excited about it. I have had this Yanaha acoustic in my house or apartment for years, and when people see it they ask if I am a guitar player. And I have always had to say no. I would say, well, I can strum a D to a G back to D and then A7 - Paradise by the late great John Prine - but no, I don’t play guitar.

This time, yeah, in another month or so I will be able to say that I play guitar.

Pick the color you like best, but I like the amber as well. Shows off the woodgrain, and that red isn’t the most attractive red I’ve ever seen.

So you ruled out the black cherry? It’s pretty choice.

Also I hate gold hardware and wouldn’t buy one anyway.

Ugly guitar IMO. But, while I did mention Merle in my OP, he is not my guitar hero. I think as a very, very general statement, a classic Tele is better for a traditional country sound. But I’ve read some more reviews of this guitar, some saying that if you use certain settings, can’t remember all the details, it could sound more like a Les Paul than a Tele. It is very verstatile.

Agreed. So much of what makes a Tele go ‘twang’ is a single coil pickup in that big metal bridge plate. A Pearly Gates mounted in wood is gonna sound a whole lot more like a Les Paul.

OP might consider what I did, which is go with the Tele style guitar with the humbucker in the next but the traditional single coil in the bridge. I’m a G&L kinda guy, not Fender (or as my go-to guitar tech says, “real Fenders”) but the principle is the same.

One of my favorites is Neil Young. On Live Rust, one my favorite albums ever, he plays a Les Paul

At my level, no need to get into too many details, I don’t even know yet exactly the type of sound I want, and with the various settings on this guitar, combined with amp settings, the possibilites are literally endless.

… some saying that if you use certain settings, can’t remember all the details, it could sound more like a Les Paul than a Tele. It is very verstatile.

I’m gonna say at almost every setting it’s gonna sound like a Les Paul. It’s built like one (maple over mahogany, set neck, two humbuckers) and other than the coil tap (and maybe at that) the only Tele feature it has is the body shape, which contributes exactly zero to the sound.

But I’ve read some more reviews of this guitar, some saying that if you use certain settings, can’t remember all the details, it could sound more like a Les Paul than a Tele. It is very verstatile.

You mean the coil tap (pull out on one of the knobs). Coil taps don’t make humbuckers sound like single coils, they make them sound like coil-tapped humbuckers, which IMO is not that useful a tone.

So much of what makes a Tele go ‘twang’ is a single coil pickup in that big metal bridge plate.

Your link just takes me to the Fender front page. What specific model of tele are you looking at?

I am not a fan of Fender guitars and in particular do not care for Telecasters, but I think that particular Tele looks like it would be good to play. All the things I don’t like about Fender guitars have been upgraded on that one so those things wouldn’t be an issue for me.

They made a Super Strat or somesuch back in the '80s that was similar; I’d still buy one of those if I could find one.

If you like it, get it Mike. IMO the “sound” of the guitar is a lot less important than the feel of the guitar.

ETA: As long as we’re talking about guitars, lemme say that for a few years now I’ve had my eye on a few from

See why guitarists around the world choose our vintage replica guitars that play, sound, and look better than the classics they pay tribute to such as Airline, Teisco and Mosrite.

Here is a guy playing it with different settings. 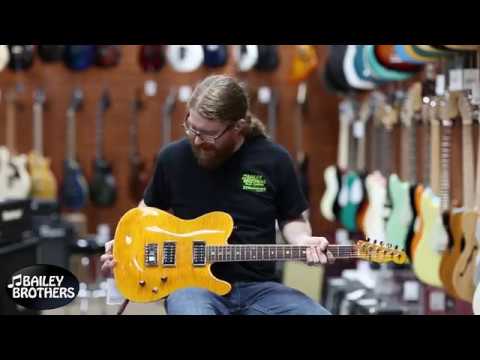