Did anybody ever notice how right-wings demagogues have a tendancy to speak in very high-pitched voices (for males, that is)? Newt now, Buchanan a few years back, McCarthy back in the day–all speak in these uncomfortably squeaky timbres, almost as if their nuts are being squeezed in a vise of some sort.

Some demagogues of course have these pleasant baritones–Reagan–or even gravelly voices like Dick Nixon, but I just think it should be required. If you squeek, please don’t speak.

I’m moving this to IMHO from Elections. It seems like more of an observation than a discussion topic about politics.

It’s a well known fact of human nature that your voice cracks when you demagogue. See here. 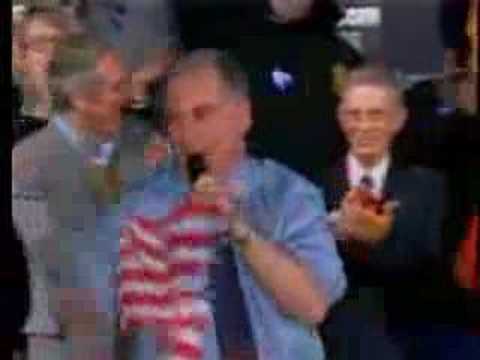 From the thread title, I first thought of Aristide, who was not right-wing.

Hitler never sounded squeaky. Or maybe he does to a German, I dunno.

Hitler never sounded squeaky. Or maybe he does to a German, I dunno.

When I finally heard the recordings of him speaking, I always thought he sounded higher pitched than I was expecting.

As for the thread title: it’s natural to raise your pitch when you yell. Most people speak near the bottom of their vocal range, and that is what we are used to, so their voice sounds abnormally high.

Furthermore, very passionate people tend to go higher than their voice will allow comfortably. And one of the methods of doing this is to squeeze off the throat. This increases the volume of the upper harmonics and lowers that of the lower ones, producing a squeakier sound. It’s why your voice sounds higher when you speak after inhaling helium, despite being the same pitch.