How did you get older relatives to use their cane or walker?

My mom needs to use a cane. I’ve ordered several from Amazon. She doesn’t pick it up and use it. Scares me to death to see her lurching around the house. She lets out her dogs. Goes in the kitchen and back to her bedroom.

She fell 4 times in 2017 that I know of. There’s no remaining relatives in my hometown. We convinced her to relocate locally. She bought a small home five mins from her sister’s son. I’m 20 mins away. That’s much better than being 2 1/2 hours away. We plan to help her as needed. We suggested a condo in a retirement community. We explained all the benefits they offer, especially home health care. Getting her to move was the best we could do.

She drove up to see the new house, turn on utilities, buy a fridge, and start preparing to move. She parks on the street and comes walking up to my front door. Scared me to death, seeing her unsteady on my steps. I ask her about her cane. It’s in the car, she says. Sigh…

I’ve heard so many stories of seniors breaking hips. Many die shortly afterwards or go into nursing homes. It can change everything for a independent senior.

Her worst fall was middle of last summer. Her head banged into a door jamb. She looked terrible for weeks. She got really confused and shaky for several months. Mom got a MRI in Nov. Thankfully that came back reasonably clear. No tumors or signs of stroke. Doctor thinks bleeding in the head caused the symptoms after the fall. It had already cleared up and didn’t show on the MRI. Mom’s doing much better. Being able to drive for a couple hours is a big step forward. It was her first big trip since that big fall last summer.

My cousin and I are trying to figure out a strategy. Buy 5 canes and place around the new house. So there’s on close buy when needed.

How did you cope with your older relatives? How did you get them to use a cane?

I see older people at stores with canes or walkers. They will use them.

The ones with a tripod are the most stable.
http://www.1800wheelchair.com/product/sky-med-stand-alone-cane/?gclid=Cj0KCQiAv_HSBRCkARIsAGaSsrCqso0VqxxJvw_xzSlMryqmbqlbtjMY-f2RUcV-_SALp0Dqtrf87IkaAkxWEALw_wcB

We’ve also tried getting her interested in a scooter.

They make a lift that mounts on the back of a car. A remote lowers it to the ground. The senior can drive it off the lift and go shopping.
https://goo.gl/images/eHcnVJ

So far that’s been nixed. She’s concerned that she can’t use the lift independentantly. She will use the scooter that stores provided. That means walking inside and hoping one is available and that it’s not broken.

Her solution? She hasn’t gone shopping in nine months. She relies on take out food from places with a drive up window

My mom will use a cane or walker, so I have no help there.

As to food, many grocery stores let you order on line, and then they deliver. To augment that, I go shopping for her every 2 or 3 weeks. I live 100 miles away.

You’re not much closer than me. My hometown is 135 miles away. We’re thrilled mom’s moving closer.

My neighborhood isn’t that safe. It’s been steadily declining for the past decade.

My cousin lives in a newly built subdivision and found a really nice home for my mom. Only 2 miles away from his house. Her new house was built 3 years ago.

I’ll be able to shop for her and visit regularly.

Wow, poor thing eating fast foods all the time. Now she’s closer maybe y’all could shop for her or go to the store with her. You also can get alot of stuff from online delivered right to her. As for the walker or cane; lay down the law. Show her stories from the news of what happens to seniors when they fall. Get her a personal alarm, for sure. We had to take my FIL car keys. He wasn’t ready to quit driving, in his head, he had gotten into several near misses and gotten several tickets. The police notified us. He didn’t tell us about the tickets. He didn’t like it, but we had no choice. So maybe her driving could be an incentive. Use it to convince her to use the canes.

My dad had a stroke, which caused him to walk unsteadily. (But, he did not fall.) He resisted a cane. At some point we succeeded in convincing him that his staggering made him look like he was drunk, and other people viewed him unsympathetically when he was out in public. The difference when he started using a cane was undeniable. People would hold doors open for him, offer him seats, etc.

I broke their legs

Time and patience and insistence (not scolding)
If you(and the rest of the fam) just keep reminding her, in a supportive and loving way she will eventually use it. It’s mostly inertia, she’s never had to remember to use a cane before, and just gets up and does things as she always has.
Has she ever been properly taught how to use it, it"s not as simple as just putting it in your hand and if she feels awkward or like it’s not helping she won’t have any reason to try and remember to use it.
I’m dealing with two elderly toddlers myself so I understand the frustration, she’ll get it eventually.

My mother in law, who has fallen and broken both hips (in separate falls), refused for years to use a cane. Because it made her feel old. But she had no problem with grabbing onto your arm for support, even if it meant she was practically dragging you to the ground. Not sure what made her finally come around… maybe the fact that she couldn’t even walk around her own house anymore without needing someone or something to hold onto for support.

My MIL (78) has had both hips replaced. She lives alone, just 10 minutes away. She walks around like a Weeble or like she’s on the deck of a moving ship. She looks very unsteady. She went to her mailbox a couple of winters ago, slipped and hit her face on a hard crusty snowbank. It looked like someone had beat her with a baseball bat. She also fell once walking into WalMart. But she refuses to use a cane. I’m sure because she feels it will make her look old. We’re done talking to her about it. We can’t force her.

My MIL (78) has had both hips replaced. She lives alone, just 10 minutes away. She walks around like a Weeble or like she’s on the deck of a moving ship. She looks very unsteady. She went to her mailbox a couple of winters ago, slipped and hit her face on a hard crusty snowbank. It looked like someone had beat her with a baseball bat. She also fell once walking into WalMart. But she refuses to use a cane. **I’m sure because she feels it will make her look old. ** We’re done talking to her about it. We can’t force her.

You should tell her that being 78 makes her look old.
running coach, cane user since age 46.

I bought several stainless steel grab bars that we’ll install in the new house. I’ll screw them securely into studs.

We’re going to talk with a local scooter dealer about this scooter lift on wheels. Mom’s car can’t handle the weight of a 350 lb lift attached to a car.

The fun part will be convincing mom to use the scooter.

This lift won’t be completely independent. It requires someone to push the scooter onto the lift and secure the straps.

She wouldn’t need a scooter if she was strong enough to push it. 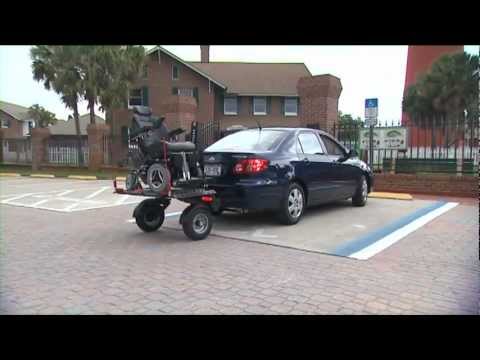 Try pointing out how much faster she can move with a cane.

You should tell her that being 78 makes her look old.
running coach, cane user since age 46.

So very true…but I’m not going to tell her!!

I have found out that since using a cane (and I really have to lean on it), it is quite a common experience to have a pretty girl hold the door for me. I often will thank them, and then tell them that one of the advantages of being old is having pretty girls holding the door. Always gets a dimple and a nice “thank you”.

We old timers get our fun where we can find it.

Tell them they can whack you in the head with the cane if whenever they want. Now don’t get all upset, they’re old, you can outrun them.

My sister (who will be 70 in ten days) needs a walker and absolutely will not use it (vanity). Instead, she has a baby stroller with a cement block in it and walks leaning on it. Whenever she goes somewhere with her husband, he puts it in the trunk and then gets it out for her. Hew basic problem is a very bad back, caused by too much standing in her job as a jewelry salesman, exacerbated by too much tennis. But she will absolutely not be seen in public with a walker.

As someone who was forced to use a cane for a while at the ripe old age of 29, I am here to say that they are a total PITA. You lose the use of one hand because it has a cane or stick in it. Tube constructed canes don’t fit as well as they could and don’t feel right.

The most important part of getting someone to use an assistive device is making it fit comfortably.

At a standing position, the hook on the cane should come up to about an inch from where her hand rests normally. Anything higher will make her walk crooked and lower will make her have to lean over.

It needs a hook, so she can hang it on her arm while she’s reaching in her purse. It needs to feel solid because she is going to be putting weight on it. It needs bling. The cane I settled on came from here SFW because it looked all cool and could be cut to my size. My not yet BB at the time, bought me the black carbon fiber one and then went to a dollar store and bought fake tattoos that he used to bling it up. I looked extremely cool with it, so I was more willing to use that than the walker I was sent home with.

PS. I got better.