Humans from galaxy far far away?

Regarding Star Wars, putting two and two together …

2: The Star Wars story takes place a long time ago in a galaxy far far away.

2: Among the thousands of species in that galaxy, one of them is called “human”.

2+2=4: In the ‘reality’ of the Star Wars universe, are we, here, now, in this galaxy, supposed to be the descendants of these humans from the other galaxy?

2: Among the thousands of species in that galaxy, one of them is called “human”.

The predominant race in the Empire is only “human” as much as their predominant language is “English”.

I think it’s called “the race that keeps the makeup budget down.”

There’s also the popular “human-oid” which is “a race which is just somebody with a funny nose or ears, but is still okay for a main character to bang if the character is sexy.”

If you want the geek answer… to hell with it. Let somebody else explain it away. Oh, all right. I’ll do it if nobody else pipes in.

Well, you’re making the same baisc fallacy that everyone makes with Star Wars: that “A long time ago…” applies to the audience. It isn’t a “long time ago” from 1977, it’s a “long time ago” from three thousand years (or whatever) after the events of Star Wars. That phrase was used to establish the epic and legendary nature of the story, not to set it in relation to our own time.If the Gregorian calender were still in use in Star Wars, the time line would look roughly like this (dates obviously invented):

At least, that’s the way I see it.

Didn’t C-3PO say Luke was quite clever “for a human being?” 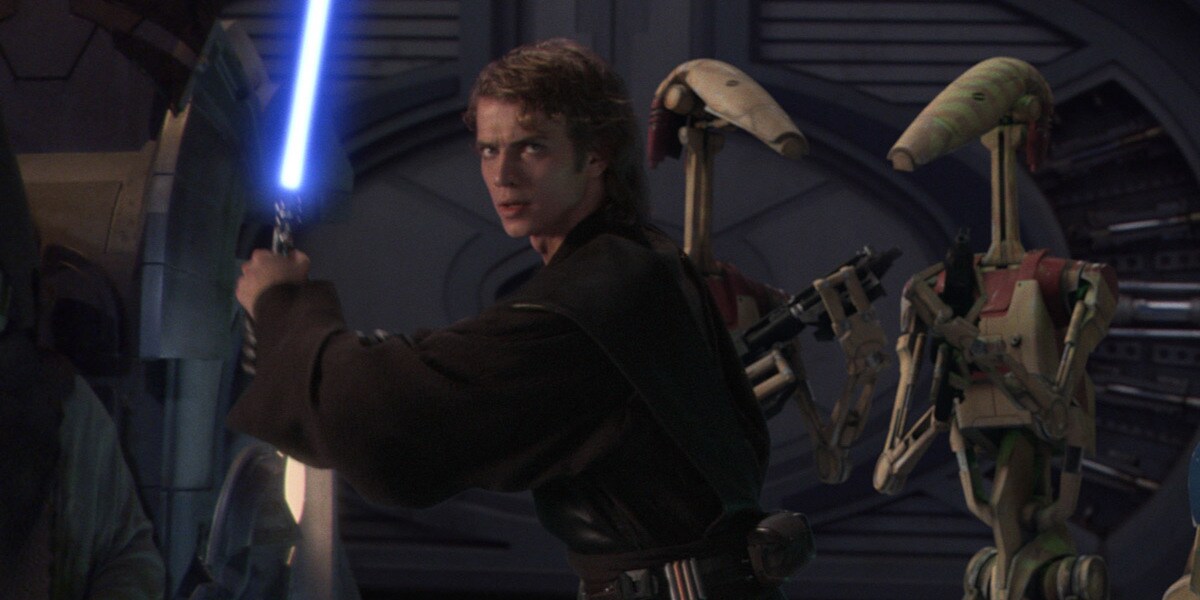 Visit the StarWars.com Databank and explore the life and legacy of Anakin Skywalker with a character biography, pictures, and videos.

When was a long time ago?

I always figured it was, like, two billion years ago.

So I guess we may never know, are we their descendants, or are they ours?

What about Han Solo telling Jabba the Hut that he’s “a beautiful human being” in the “Special Edition”?

(Yes, I know he was originally addressing a dirty fat man in furs-- I’m not sure what bugs me more, the species inconsistency or the pointlessness of reiterating everything said in the (buggered) Greedo scene, making the Jabba scene redundant and repetitive, and saying the same thing more than once.)

I think they were going for a “There are those who believe that life down here, began out there…” kinda thing.

Whatever… a realistic film about alien beings would probably be pretty incommunicative. (Besides, how could you justify copping all the scenes from Hidden Fortress, Wings, and The Wizard of Oz, etc in a film about some truly exotic life-form?)

Earth is actually a secret backup plan for the Emporer, whose body lies hidden in a secret cloning chamber far below the earth. Soon he rise again and rule the Earth! And then… spread to the Galaxy once more!

“Human” is probably just a terran English translation of the name of those hairless pink dudes in Imperial Standard.

Either that, or the Empire has really gone to pot in the intern millenia…

For some reason they have established that Han Solo was “Correllian”, probably because he mentions Correllian ships at one point. Apart from that, he’s just as human as the rest of them, so I dunno.

Personally, I would’ve preferred it if they’d just said all human-like beings will be referred to as “Correllian” and all language that sounds like English will be called “Basic” (in fact, I think it is).

[slight hijack] What about falcons? I can’t remember seeing anything resembling one of our birds in the films (except one establishing long shot on Naboo, IIRC), so do they have birds like ours? What do their falcons look like? Maybe the falcon is a different species entirely with, coincidentally, the exact same name (shades of Douglas Adams)? Just wondering… [/slight hijack]

I always just assumed that the “A long time ago in a galaxy far, far away” line was just to make sure that the audience didn’t get confused and think this had anything to do with Earth. It’s kind of to set it apart as taking place in an alternate reality of sorts.

My big question is in relation to Episode IV … notice that the planet is called Tatooine. However, when it’s referred to by Princess Leia, she calls it Dantooine. Hmmm … must be that famous Alderaanian accent.

My big question is in relation to Episode IV … notice that the planet is called Tatooine. However, when it’s referred to by Princess Leia, she calls it Dantooine. Hmmm … must be that famous Alderaanian accent.

Nope. Dantooine is a different planet. I’m guessing the suffix “-tooine” means planet in some non-“English” language in the Star Wars universe.

Also, Han is called a Corellian because he was born on the planet Corellia. Leia, from Alderaan, is an Alderaanian. Luke is a, um, Tatooineite. Or something. Anyway, it’s his nationality, not his species.

What about Han Solo telling Jabba the Hut that he’s “a beautiful human being” in the “Special Edition”?

I hadn’t thought of this before, but what if Jabba is human? Perhaps his, …um…, condition is the result of some retrovirus contracted in childhood.

Han is called a Corellian because he was born on the planet Corellia.

Agreed. And I think that Jabba the Hut is same thing as John the Tailor, or Peter the Boy Scout. It’s some affiliation he belongs to, not his species.

Sorry, but Jabba is a member of the species Hutt. There are other Hutts mentioned in books, etc. It’s mentioned on the Star Wars web page. I’m thinking that Han meant “human being” in the same sense that we might use person to describe any intelligent life.

*Originally posted by Natural-J-Bankie *
**Sorry, but Jabba is a member of the species Hutt. There are other Hutts mentioned in books, etc. It’s mentioned on the Star Wars web page. I’m thinking that Han meant “human being” in the same sense that we might use person to describe any intelligent life. **

I’m certainly not going to out geek anyone on this, but just because there are other Hutts, does that neccessarily mean that that is their species? I remember someone(Leia I think) saying “the Hutts are gangsters”. Certainly every member of the species(if it is one) isn’t a gangster. Of course maybe its just a cultural stereotype:). I haven’t read any of the books, however, so feel free to correct me.

Visit the StarWars.com Databank and explore the life and legacy of Jabba the Hutt with a character biography, pictures and videos.

The description of the species is here: 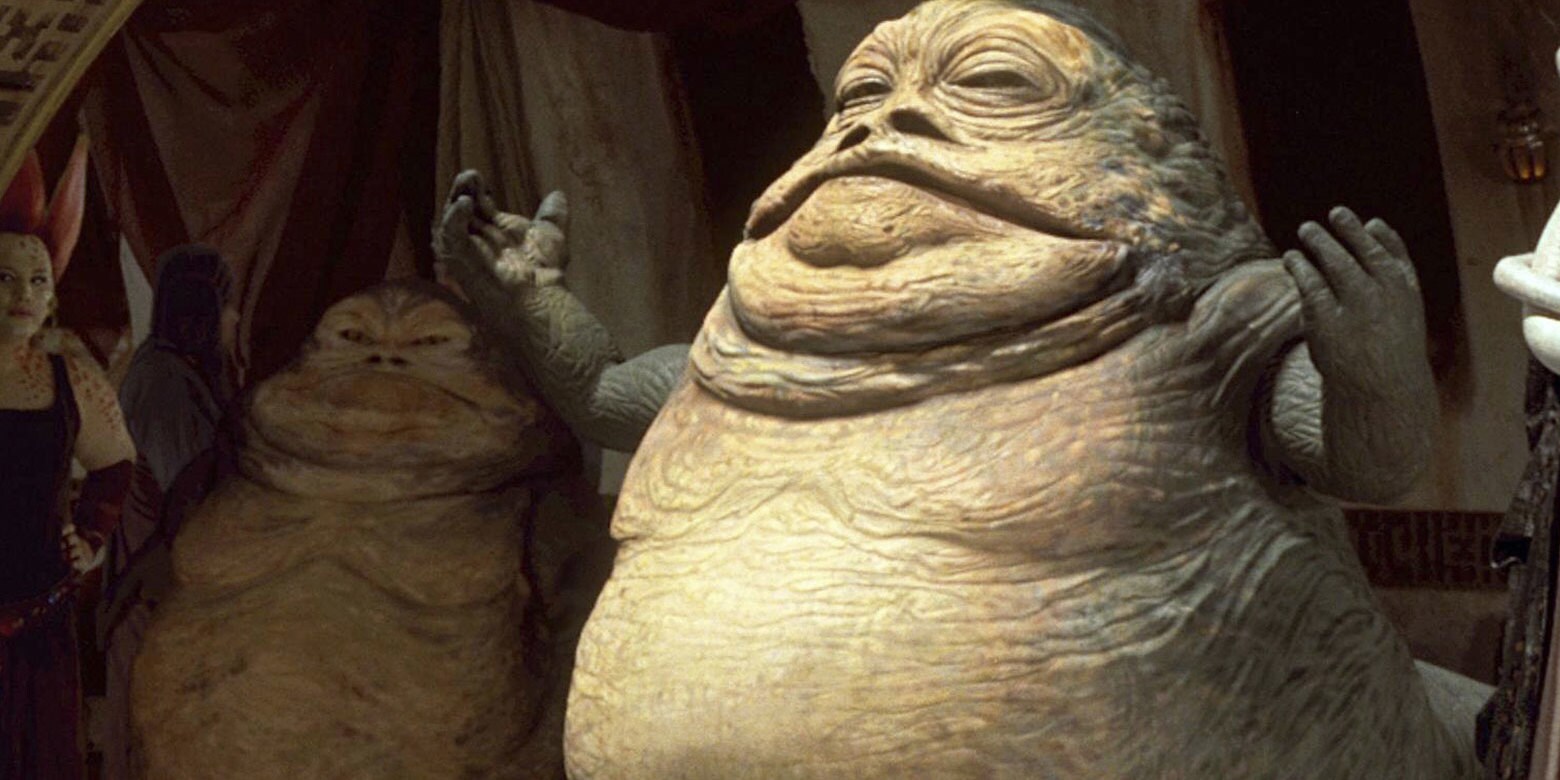 Hutts are large, slug-like creatures known to be gangsters. They control Tatooine and are involved in organized crime throughout the galaxy.

Maybe they’re all gangsters, or maybe Leia (or someone) is a speciesist.

Captain Tanaka (sp?) in Ep I said the Hutts were gangsters.

Of course maybe its just a cultural stereotype:).

Who knows. In all the media it’s been presented that the Hutts are criminal ringleaders. If the only things you know about Italy are from watching The Godfather, you’d have some pretty misconcieved notions too. Still, perhaps that’s all that we’ve been shown. We haven’t been obliged to go down to their slimy homeworld and see the friendly shopkeepers in the local toad store, the pretty Hutt ladies picking flowers in the marsh fields, and the happy children Hutts flolloping in the muck playing “Stormtroopers and smugglers.” Makes me shudder just thinking about it.

In SW (secondary sources) humans (and banthas) spring up throughout the galaxy like weeds. They’ve never presented a “human homeworld,” just a lot of them that happen to have humans on them. So they name them according to whatever planet they claim to be from (or colonized many generations ago).