I updated my Motorola Droid RAZR MAXX HD to Android KitKat over the weekend. My phone kept haranguing me to update and I figured, “What’s the worst that could happen?” Well, it didn’t break my phone like it did for some HTC One users I read about, but it does contain some annoyances that are strong enough to make me consider a factory reset.
[ol]
[li]All my status icons are white now. I liked the nice, colorful icons I had before: blue Bluetooth, green battery, etc. Now it looks like the status bar on a phone from 2008.[/li][li]White LED for all notifications. I had to download a special app just to get my color-coded notification LED’s back. And even then it only works half the time.[/li][li]Removal of ringer toggle from the lockscreen. This was an insanely useful feature on my old version of Android. I used it every night before going to bed. Now I have to press the power button once to get the lockscreen, then long-press again to toggle the ringer. Much less efficient and intuitive.[/li][/ol]I’m sure there are other annoying changes under the hood that the more techie people know about but I’m oblivious to. I really wish developers would put in a “Revert to old GUI settings” option when they do GUI changes, especially hamhanded ones like these. Does anyone else not like KitKat?

You might be able to revert to the stock Android launcher, there is a Google add-on one by default I think? From settings / Apps / All scroll down to the Google Launcher (can’t quite remember what it’s called, sorry) click it and click “clear defaults”. Then the next time you press the “home” button you will be asked which launcher you want to use (tick the box to remember it for default). That may revert some stuff, the icons at least.

I hate how I have a button for recent apps but at the home screen it does nothing. I now have to long press the home button instead…? Why…!?

Since I have the Samsung overlay, I don’t notice much difference. I did get the all white status bar, and I agree I’d like the color back, but I got used to it fairly quickly. What did happen, though, was a huge battery drain. Like, down to 20% in 6 hours. I tried all sorts of suggestions to fix it, and the only cure was a factory reset. It was a pain, but now battery life is at least 50% better than it was before, so I’m happy about that. Still, backing this thing up and then reinstalling was a pita that took hours I hope I’ll not ever have to repeat.

A factory reset will not roll back your OS, though. You’ll still have Kitkat as far as I recall from all the research I did before resetting. It maybe might fix your LED settings, but I’m only basing that on mine still changing depending on the notification, blue, green, purple, red. But the status bar is still all white. If I were you, I’d check around on multiple forums about the LED change and whether you can get it back before considering a total reset. Plus you’ll have to make sure to do it over wifi if you don’t have a large data plan. Mine’s unlimited, and seriously faster than the work wifi I have access to, but I’m throttled for 6 more days now, because I used over 5Gb for the backup and restore. #firstworldproblems

I upgraded from a Droid X that had Android 2.x to a Droid Maxx with KitKat and also find it less than optimal. I really disliked the White Icons as well (but I have gotten used to them).

But what I really hate is the Keyboard. The stock Keyboard for my old Droid was much much smarter than this one. It would remember words I had typed and give me guesses as to what I might type next. if I typed a specific sentence and then tried typing it again I could just repick all the words because it wold suggest it to me. This Keyboard gives me canned suggestions that are ever right. Also it would give as many as five suggestions where this Keyboard only gives three. I looked into seeing if I could down grade but no luck.

I also liked the stock Text Messaging app in my old phone better. Conversations were in differently colored bubbles which made it easier to follow who said what. Also it time stamped every text, this one only time stamps the current day unless you select the text’s details.

Not sure how it works on your particular phone, but on other Android phones that I’ve worked on, factory resetting will not give you the old android version back. When you update, the new version would flash over the old version. Factory resetting would only wipe everything on the data partition, leaving the system partition intact. Since (I believe) the update overwrites your system partition instead of installing on the data partition, it wouldn’t do you any good to perform a factory reset.

It’s been awhile since I’ve been up to date on such things, so I could very well be wrong. I wish I’d kept the hobby but life got busy and I kinda lost interest. Just wanted you to know that you might want to check if a reset would even yield the results you are hoping for before you try it.
I’m not familiar with Motorola phones at all, but with HTC phones you could download a file of the old OS and flash it through hboot. There was also a way to do it directly from the computer.

One thing that might help with the ringer toggle; there is an app called Llama that you can use to automatically silence your phone during certain hours.

I don’t like it either. I miss the ringer toggle on the lock screen, and I don’t like the white LED.

One thing that’s really messing me up on the keyboard - it used to be that if you held down the period, it would pop up an overlay panel with lots of useful punctuation marks. Now there are only eight ( - : ’ @ # ! , ? ). No parentheses, no double quotes… I have to go to the numeric screen for those now. I have to stop and remind myself they aren’t under the period anymore.

Oh, and I don’t like the new smilies either.

As far as the keyboard goes, there are a million keyboard apps you can download from the Play store.

And even though you have a stock keyboard, it’s possible/likely it’s a stock Motorola keyboard, and not the stock Google one.

I’ve got the stock Google keyboard, and long-pressing the period gives me many more punctuation choices, including parenthesis, plus sign, minus sign/dash, (though no double quote, still only single.)

Here’s the link for the stock Google keyboard.

There’s also settings on keyboards. On the stock one, long-press the “speech to text”/microphone and a little gear icon pops up. Swipe up to it and release, and you can get into the settings.

And if you want easy-access to toggles/widgets on the lockscreen, there are lockscreen replacement apps as well. Dashclock is probably the most popular and best looking. And don’t be fooled…it has far more functionality than just a clock.

As far as colored icons in the status bar goes, Google/Android has switched to a very simple, plain, flat UI. I do miss the blue colored icons (in ICS/JB, white cell and wifi icons meant you weren’t connected to Google’s servers, blue meant you were). Now they use a grey to indicate you’re not connected and white if you are. Not as easy to see at a glance.

But overall, I MUCH prefer the direction they’ve gone in in ICS and beyond. I mean…are there really people out there that prefer this garishness? 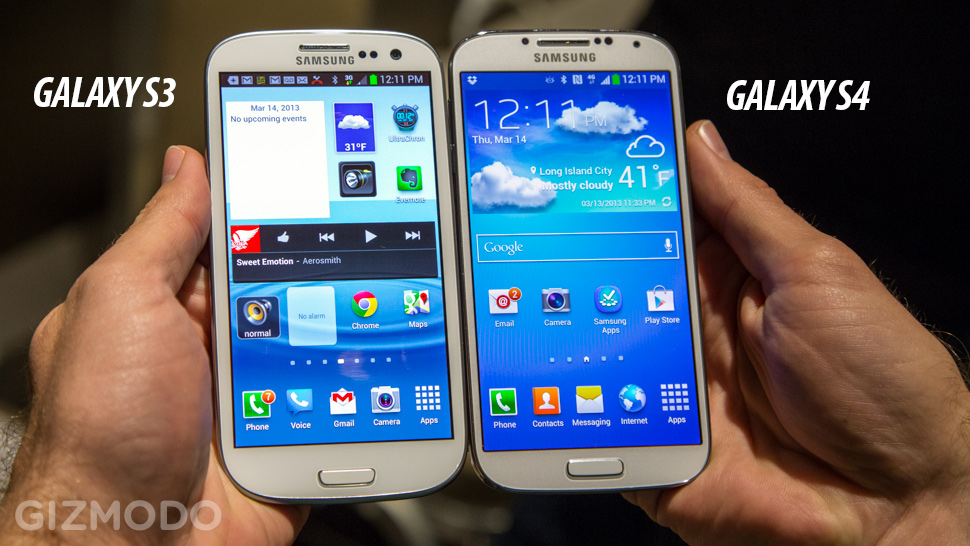 And that’s not even that bad of an example. Far worse things existed in pre-ICS days (and even post ICS for too long of a time…look at the disaster that is the LG G2’s UI.)

If you do not like something about the keyboard, then I suggest you download the very popular “Swift” keyboard, which as of yesterday, is now free.

Far superior to the any of the manufacture’s default keyboard, or the Google keyboard.

I do not like the fact that KitKat changed the way access is done on external SD cards, because the change made the SD card virtually useless (for me).

I do not like the fact that KitKat changed the way access is done on external SD cards, because the change made the SD card virtually useless (for me).

There’s a few good reasons they have been increasingly restricting SD card function.

First is security. Previously, if an app had permission to write/read to the SD card, there wasn’t a way to stop it from writing/reading ANY of the SD card, including areas other apps write to.

Yes, some apps have the ability to be installed on the SD card, but this isn’t a good thing to do.

And then ther’s just the issue of the SD card’s speed. Not all cards are created equal. Ask professional photographers, and they’ll tell you they always buy the more expensive memory cards out there, because they have faster read/write speeds (so it can actually save the data as fast as the camera sends it to the card.) (And also because the expensive ones are less prone to failure.)

Thirdly, as mentioned, SD cards are more prone to failure/breakage than internal storage. Especially since people will often get the cheapest ones, which can be the no-name, super-low speed ones with bad QA. So then they get mad when their photos get lost or apps (that shouldn’t have been installed on the SD card in the first place,) don’t work.

Google’s “standard” since Ice Cream Sandwich has basically been “no SD cards.” You can see this in their Nexus line. Since the Galaxy Nexus over two years ago, they haven’t put SD cards in their Nexus phones, which are the “Gold Standard” of Android. They’d prefer lager on-board storage, and a large reliance on “The Cloud.”

Unfortunately, most manufactures do their own thing anyway. Very few phones other than Nexus phones in the last couple years have been made without SD card slots.
The first HTC One (M7) didn’t have one, but they went and added it back in for this year’s One (M8.)
The Motorola X line doesn’t have them. These phones are about as close to the Nexus phones as you can get while not being a Nexus (even the Google Play Editions of the Galaxy S4/5 and HTC One M7/M8 are further off, because of the inclusion of SD cards slots and non-standard button layouts.)

I’m ok with no SD cards, because of the reasons above, but I wish Google took their own advice and added more internal storage. The first two phones they made without it, the Galaxy Nexus and Nexus 4, only had 8 GB and 16 GB options. The Nexus 5 only has 16 GB or 32 GB options. 32 GB should really be the minimum, with 64 GB being the “upgraded” option…if not 64 the minimum with the option to to to 128.

I have last year’s HTC One (M7) Dev edition, because it was the only one with 64 GB internal storage. I just modified it to run the Google Play Edition ROM so it’s as close to stock as I can get it.