Ladders are ubiquitous. Every hardware store sells them. Everyone has a couple. They’re so common that you never give a second thought on how f-ing dangerous they are.

I have reached the point where I think they’re horribly dangerous tools. I fell off one a couple decades ago, but was very lucky in that I only bruised my tailbone. Last winter I spent many weekends wiring my barn while perched atop a 10 foot ladder. A couple times I almost lost my balance. A couple times I almost lost my footing. Had I done so, I would have landed on hard concrete.

A coworker was working on the outside of his house a couple weeks ago. Fell off the ladder. Concussion, broken bones, internal bleeding. Spent two weeks in the hospital. He’s really messed up; he will never be the same.

He says he will never climb up a ladder again.

I now need to install light fixtures in my barn. I was originally going to use my 10 foot ladder. Hell no. I just bought some adjustable, 6 foot scaffolding at Home Depot. It has 12 foot reach. $220. Worth every penny. (And yes, I know you also have to be careful on scaffolding. But it’s not nearly as dangerous as a ladder.)

So here’s my new rule: if you need to elevate yourself, spend the extra dough and use scaffolding. Better yet, hire someone. You should only use a ladder if scaffolding is impossible or very impractical to use.

And for the really tall stuff, you can set your ladder on the scaffolding!

It’s not just extra money, it’s also a hell of a lot of extra time. I’m not going to rig scaffolding every time I add food to the bird feeder. (Okay, I actually use a step-stool for that, not a ladder, but the same principle applies.) If we set up scaffolding to clean the gutters, it would be a two-day project, not a one-hour project. (Although, fearing ladders, I did remove most of the gutters over the past few years.)

Once I hit 50 years old, I started noticing my general coordination was slipping (naturally; no disease). Now that I’m over 60, I never descend stairs without using the handrail. No, I don’t need it to steady me, but I figure there is a 2% chance I’ll miss a step or do something else clumsy that could seriously injure me.

There are a lot of maintenance items outside the house that I certainly have the skills to do (like the woodwork repairs on my front porch overhang), but I know there is a non-zero chance I’ll fall off something. And I don’t mean because I’m clumsier than most; it’s just part of getting older. Fortunately, I can afford to hire a handyman for some of that stuff.

I’ve had a co-worker fall to his death from a ladder, and another spend 6 months away from work from ladder-related injuries.

Ladders need to be taken seriously.

After spending some time working for the cable company, and going through their ladder training, and then using my ladder dozens of times a day, I definitely came to respect them.

It terrifies me to watch anyone on a ladder anymore, as I know all too well how things can go south real fast.

My father fell off a ladder about fifteen years ago (he was 55) while doing some window work at the house. Two stories onto concrete. Survived, but he sure as hell didn’t wish he had the first few hours. I wasn’t there at the time, but he shattered the right side of his body (mostly ankle, shin, and shoulder) and spend a few weeks in the hospital getting metal parts put into him and fixed up. Kinda killed his soul for a good number of years, there, as he was a tool and die maker and really enjoyed his work, and the accident made it an early retirement for him. He walks around with a bit of a limp, and doesn’t have any feeling in half of his right hand (I think it was no feel whatsoever in his pinky and ring finger.)

So, no ladders for me. I’ll just call and pay the roofing people to do stuff like leaves. Actually, it isn’t even so much that this is a self-imposed restriction, but my wife definitely will not let me go up in a ladder after knowing what happened to my father, so that’s fine with me. I’m happy to pay someone else to take the risk or proper safety precautions.

Had some people painting my house last summer. Amazing to watch. I used to climb up high like them, but no more.

yeah I don’t like then and grandma fell off one and messed up her hip and ankle for a long time but I have to use them on occasion …. I have a really heavy one that wont move unless folded up (cost almost in the low 3 figures) because im short round and have the coordination of a new born so nothing wobbly …… I have a 3 step stepstool for smaller things ………

OH&S (occupational health and safety, the government regulator) has definitely clamped down on ladders here: the default position is that working at heights is unsafe.

If you can use scaffolding, using a ladder probably puts you in breach of your workplace safety requirements, and doing the safety analysis for a ladder is probably more work than putting in scaffolding anyway.

I’ve never been a big fan of them. Cleaning out gutters on a one story house, doing work in my garage or basement, no big deal. But getting out the extension ladder and going up the second story…nope. It’s not even the height, it’s how much the ladder bounces when you climb on it. Also, I was never good at going from the roof back to the ladder. Do I go over the top? Around the side? I dunno, but when I do it, people will comment that it’s obvious I don’t use ladders often.

I think it’s partially due to growing up around forklifts and being comfortable around them. If I need to get on the roof at work, I put a pallet on the forks, toss all my tools on it, raise it up to the roof line climb up the mast. No, not safe, but a helluva lot easier than lugging tools up a ladder and it creates a nice ‘safety net’ should I lose my footing.
As I’m nearing 40, I don’t particularly like climbing it anymore (hurts my knees) so I tend to have someone raise/lower me or I’ll put it in place and use a ladder to climb up to the pallet.

Another option (for the OP) is to rent a scissor lift. I looked into it not too long ago and was surprised to find out that they’re not that expensive. You can get one from Home Depot for about $200/day.

Right now I have a bone in my ankle that has grown back wrong (Dr misdiagnosed, said it was soft tissue damage

) from stepping off of the second step of a ladder thinking it was the first of a ladder. Unfortunately my job requires frequent ladder use.

Here’s a pic of me on a tall ladder a couple of months ago. And yes, admittedly unsafe usage: 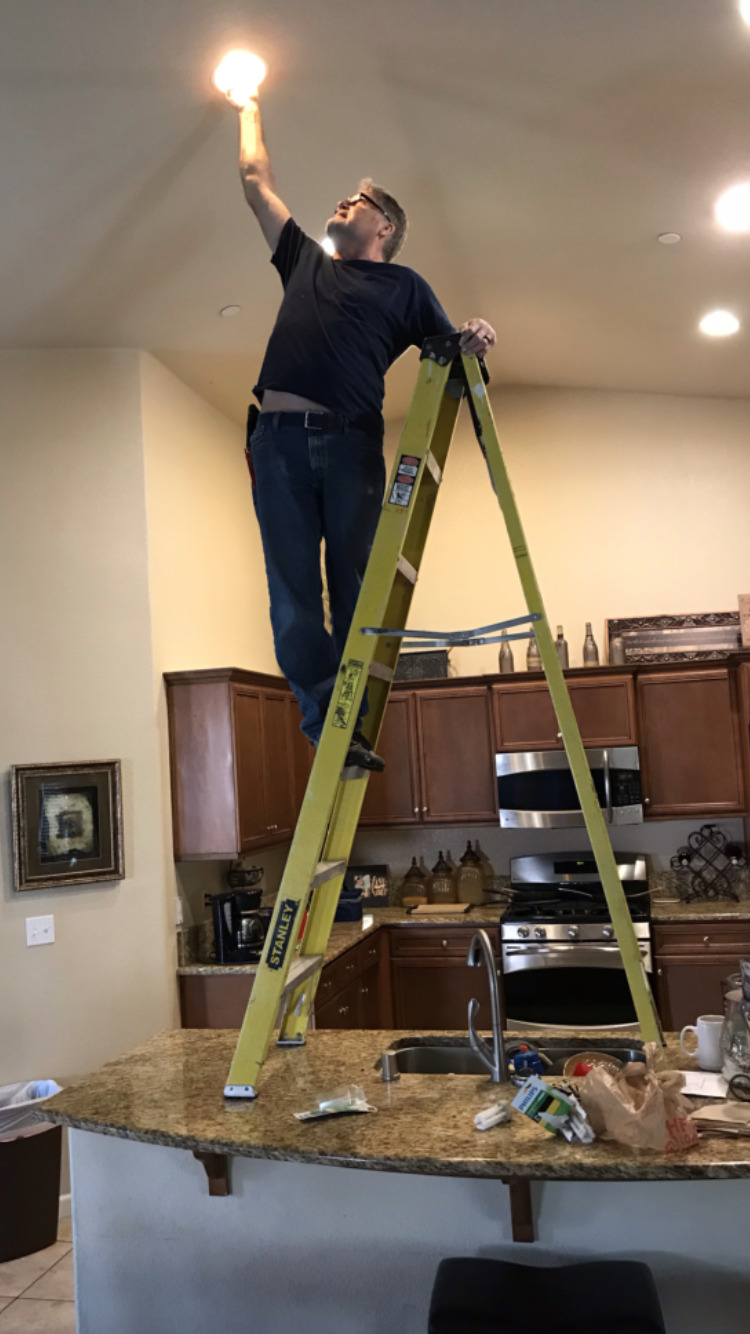 Never go on ladders. I have problems with the floor and that habit it has of coming up really fast to meet my face.

Over 4,500 injuries and 60 deaths a year due to scaffolding…

Right now I have a bone in my ankle that has grown back wrong (Dr misdiagnosed, said it was soft tissue damage

) from stepping off of the second step of a ladder thinking it was the first of a ladder.

Exactly how I broke my foot! My dr has forbidden me to climb ladders anymore, but sometimes I have little choice. I never go above what I need to reach my 8ft ceiling now.

I knew a woman with brain damage from a fall indoors from a 6ft ladder.

I think it’s partially due to growing up around forklifts and being comfortable around them. If I need to get on the roof at work, I put a pallet on the forks, toss all my tools on it, raise it up to the roof line climb up the mast. No, not safe, but a helluva lot easier than lugging tools up a ladder and it creates a nice ‘safety net’ should I lose my footing.
As I’m nearing 40, I don’t particularly like climbing it anymore (hurts my knees) so I tend to have someone raise/lower me or I’ll put it in place and use a ladder to climb up to the pallet.

I’ll agree that seems a good idea, but on every forklift job I ever had, it was immediate termination for doing anything like that.

Twenty years ago, I stuck a ladder up against a flagpole and used that to put a new pulley on the top of the flagpole. It’s a fairly sturdy flagpole, but still, I was swaying back and forth. These days, not only would I say no, but HELL NO.

I’ll still use a ladder to go up to the roof top of my house, but it is a rancher.

I need to replace some rotten wood on a rental property I own (which is not a rancher). The bad wood varies from probably about 10 to 15 feet up. Let me know how that scaffolding works out because I’ve been looking at buying it just for this type of thing.

I’ll agree that seems a good idea, but on every forklift job I ever had, it was immediate termination for doing anything like that.

It’s a small business with only about 15 employees. But, yeah, I can’t think of a place that would let you go up and down on a forklift, much less untethered.

Any time we have HVAC people working on our roof, I’ll offer to lift them up with the forklift and they almost always decline. At best, they let me at least lift their tools/equipment/parts (ie compressor)/gas bottles etc up.

I was repairing the light unit on the ceiling fan in our sun-room a few days before xmas. The ceiling is pretty high. I was precariously standing on the step that says “this is not a step” when our African Grey, Rocco, decided to fly up to see what I was doing. I almost fell. Scary stuff, ladders.