In Praise of Older People Bodies With Vaginas

Limited excerpt from a recent Economist:

My question: One should balance sensitivity with being practical. How do people feel about this? 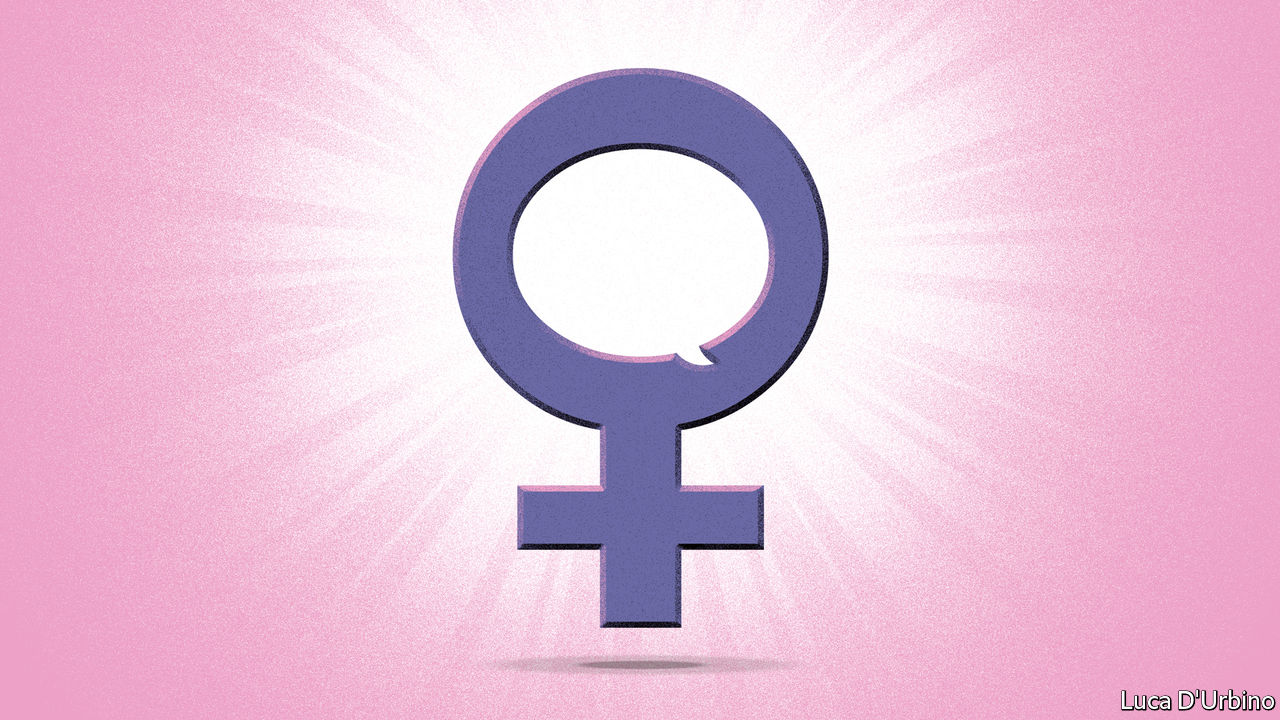 Why the word “woman” is tying people in knots

“Bodies with vaginas” is an odd way to refer to half the human race. Yet it was the quote that the Lancet , a medical journal, chose to feature on the cover of its latest issue, telling readers that “historically, the anatomy and physiology” of such bodies had been neglected. After complaints about dehumanising language, the Lancet apologised. But it is not alone. A growing number of officials and organisations are finding themselves tongue-tied when it comes to using the word “woman”.

Limited excerpt from a recent Economist :

I understand you meant well, but what you cited definitely exceeds our limited “fair use” rule.

Here’s the relevant portion of our rule:

You agree not to post any copyrighted material unless the copyright is owned by you or by the operator of the SDMB, except as permitted by the “fair use” provisions of the U.S. copyright laws (in general this means brief excerpts only). You agree to abide by the wishes of the board moderators in interpreting and enforcing these rules. Refusal to cooperate with board moderators or to abide by these rules is grounds for revocation of your posting privileges.

I’m going to delete a portion of your post. In future, it’s a good idea also to indicate when you are quoting an article by using the block quote feature. Otherwise, it looks like something you’re writing yourself rather than simply quoting the work of others.

We’ve discussed this before not too long ago. The answer is simple: not all people with vaginas are women. Thus referring to them only as women is factually wrong. And now that this is well known, deliberately excluding them would be bigoted, and bigotry is morally wrong.

Your article seems to mention some actually dehumanizing terms, e.g. “body with a vagina.” I’m fine arguing we shouldn’t use such terms. But that doesn’t mean the only alternative is to go back to acting like only women have vaginas. The term I am most aware of being used lately is “people with vaginas.” Not only does that use the word “people,” which is difficult to argue is dehumanizing, but it uses people-first language, which was designed specifically to put the focus on the person over the descriptor.

I very much want to thank @Aspenglow. I am very glad to know that the following paragraphs were not the OP’s words. The article seems to be using a disingenuous framing of the situation. It even includes this bullshit line:

Most dictionaries define a woman as an “adult human female”. Among some activists, this is a gross provocation, for they see it as denying that males can be women, too.

And the claim that the movement doesn’t go the other way is just objectively false. “People with prostates” and “people with penises” are also growing in popularity.

This movement is not in any way hurting women, because a woman being referred to as a person is not hurtful. If I say I saw three people, does anyone object that I’m dehumanizing them because they were all women? Of course not.

I find it interesting that I can’t seem to find a name on the article. I would love to check out the background of the author.(And, no, the name in the image is not the author’s name, unless they also took the photo. They are a photographer.) Is it normal for The Economist to not include a byline?

The Economist is just continuing it’s “War on Wokeness” crusade by highlighting edge cases and pretending they are some grave threat to public decorum.

We’ve have an accepted, uncontroversial term for “bodies with vaginas” for ages: “Anatomically female”. Some well meaning but ultimately clueless scientists weren’t aware of the accepted phrasing and decided to coin their own term and came off rather badly doing it.

I guarantee you nobody in the social justice movement is in any hurry to embrace “bodies with vaginas”, especially because it smacks of reproductive essentialism, that vaginas are somehow the symbolic representation of female anatomy because women’s value is in providing sex to men and bearing their children.

We’ve have an accepted, uncontroversial term for “bodies with vaginas” for ages: “Anatomically female”.

I’m sorry for any confusion. I am interested in the medical angle. I have been asked to use pronouns before and this is not an issue since one tries to strengthen a therapeutic alliance.

But if the term “woman” is broadly understood and accepted it seems reasonable to use it, if in a general context, so it automatically includes whomever wants to be included. In many contexts the distinction may not matter.

Other terms are needed for specific instances where these variations become more relevant, or do matter, as they might in a medical context. I know quite a few specialists in “womens’ health”. I do not know how they feel about this issue.

I’ll just note that, when it comes to medical literature on the human body and how to repair it, I’m not really too fussed if it’s dehumanizing.

If your car mechanic weeped at the thought of unscrewing the hinges on your car door, for how much it shall blemish those fair lines… I’m not sure that he’d be any more competent at taking the thing apart and putting it back together in a deliberate and concise manner. I feel like he’d probably be worse.

Between having my hand held by my doc or staying alive to hold the hands of my family, the latter is far more important. Be as technical and mechanical about your approach to making my body work as you can.

I find this trend of using phrases like “people/bodies with vaginas/cervixes etc…” to be very inappropriate. Women spend their entire lives fighting objectification. They shouldn’t have to put up with being described in this way. I understand that the intention is to be more inclusive, but using objectifying phrasing is no way to go about it.

We’ve discussed this before not too long ago. The answer is simple: not all people with vaginas are women. Thus referring to them only as women is factually wrong. And now that this is well known, deliberately excluding them would be bigoted, and bigotry is morally wrong.

That’s technically true, but it’s also silly. Some astronomically huge percentage of people with vaginas ARE women. And there’s a similarly tiny number of people with penises who are women as well. But the vast, vast majority are men.

I appreciate calling people by what they want to be called, but there’s a point when it becomes ridiculous, and for me, when we can’t call women women, because there’s some tiny number of trans people who are outside the norm and don’t want to be called that.

Ultimately that feels like their problem, not mine if I want to generally refer to people with vaginas as women, and people with penises as men. It’s like someone getting their panties in a twist because we refer to black people in America as “African American”, when in fact, there are non-American black people who live here.

In the specific case, absolutely refer to people by what they identify as, but in the general case, call women women, and men men. It’s absurd and silly to do anything else.

I’d be fine with people using the language they like to describe reality however they perceive it. Unfortunately, the same courtesy isn’t extended. What language are we allowed to use here? It’s unfathomable at this point.

I’d be fine with people using the language they like to describe reality however they perceive it. Unfortunately, the same courtesy isn’t extended. What language are we allowed to use here? It’s unfathomable at this point. -

You are well acquainted with the rules of this board. The post above is you taking a gratuitous and wholly inappropriate swipe at board rules and moderation, as well as indulging in a thread hijack.

If you have an issue with moderation, take it up in ATMB.

This is not a warning, but it’s a close call, in my view. I urge you to refrain from doing this again.

By whom? and in what context? Because context matters.

I don’t think that makes sense and I don’t think it is useful to state it as such.
It ignores the fact that male/female is already very useful as a term for denoting biological sex and phenotype. as such it seems to claim that biological sex can be changed by mere assertion.

Personally I find the dehumanising nature of the “bodies with vaginas” terminology grossly mysogynistic. My own experiences suggest that a large proportion of those to whom that phrase is directed think so too and you would think that their opinions matter.

There is really no need for it either when we already have other terms that work perfectly well to describe the vast majority of humans purposed for small gamete/large gamete production.

Had the Lancet used the word “female” instead there would have been zero confusion.

By whom? and in what context? Because context matters.

To be clear, I’m not saying that “biologically male” can’t possibly be transphobic. I just can’t think of a context in which it could be.

Can anyone imagine seriously using these terms in a serious context?

“People with vaginas are now earning 55 percent of all college degrees, while those with penises earn only 45 percent…”

What bullshit. If a man identifies as a woman, then call her a woman. Who cares.

You don’t tell women they can’t use the word they’ve been struggling for generations to bring into an equal identity status because some formerly male insecure wannabes feel excluded by the term. It’s like the born male woman’s feelings are more important than the born women’s feelings… AGAIN!

Yeah, more than a whiff of misogyny on this one.

The question that often arises in me in regards to this is what is it to be male or female at all and is there any difference beyond the anatomical, and does it matter to refer to oneself in a gender based way? Or is it now we are all people? In other words if those with a penis or vagina can identify as woman or man, and can have desire for either or none or both, is there any use for the terms women and men at all anymore?

Issues of sex and gender may be important and deserve consideration but it is necessary to keep things in perspective.