Is Alice's Restaurant a tradition for your Thanksgiving?

It came around again on the guitar, this morning, and we sung it when it did.

I’d say you’re the CO-OP, buddy. You beat me by two minutes but I put up the now-lost poll.

And if it makes you feel any better, my father-in-law is in town and I still had a bunch of work-related disaster mitigation to deal with so I didn’t listen to it until just a little while ago. But the only way I won’t listen to the song is if I’m dead or in a coma. Still, I’ll make a special effort to listen to it at noon on the local radio station next year. It’s like I said a few years ago, it’s the fact that I can depend on Arlo at noon that makes today different from any other day now that my family has fragmented and we don’t do holidays together anymore.

I almost forgot! And I’m the OP.

Well, kid, have ya rehabilitated yourself?

I forgot about the poll. Sounds like you’ve been busy this year but if you got to hear the song, then all is well.

Once more it comes around on the guitar, and once more it remains the only stable, reliable thing about Thanksgiving for me. Robin, Aaron, and I are on our own for Thanksgiving, everyone else is off doing their own thing with their other families, so it’s Arlo, football, and Truckstop Turkey. And this thread, of course.

And you guys as well. I may not participate here as much as I once did, but this place is like home, and as long as it’s here I can always come home. Have a happy Thanksgiving, everyone.

This year, I looked for the most recent live performance I could find, and this one came up. Can anyone find one newer than this? (June 2, 2019) 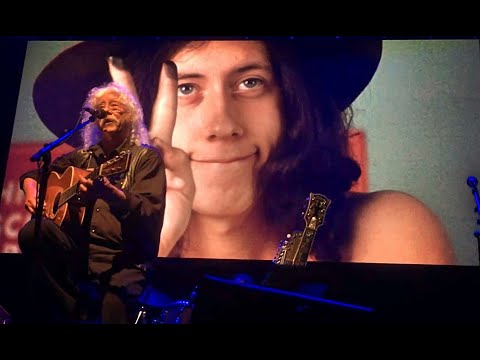 Welcome home! And happy Thanksgiving! Planning to listen to it around noonish. May listen to some other of his stuff after that… Been on a bit of an Arlo kick anyway.

Fun to read this thread. Here’s my Arlo story:

When I worked as a radio DJ I was in the booth on Thanksgiving one year. I asked the station manager if I could play Alice’s Restaurant and was told yes, but we didn’t have it in the computer. This was in the 90s, and even by then everything was done digitally (which made it a very boring job - I learned old fashioned broadcast engineering using records and tape carts, and it was fun).

So I brought in my personal CD and played it. That was the only time I ever played a manual track at that job.

A couple of years later I was living in the midwest. A girlfriend and I were driving somewhere and came upon a theater with Arlo’s name on the marquee. I screeched into a parking spot, we ran in, bought tickets and got in halfway through the show. He tells a lot of stories onstage! We even ran into him in the parking lot on the way out and said hello.

Lastly, I’d like to put in a good word for the movie. It’s only peripherally about the song, but I think it’s an interesting period piece. I have the DVD and there’s a commentary track. Arlo says a lot of the events depicted didn’t happen, such as his being beat up during college. Still, a movie I re-watch now and then. Maybe later today.

Listening to it right now.

Gave me an idea for that Legal Eagle YT show…legal bits from songs. Though admittedly other then Thats the Night the Lights Went out in Georgia…I cant think of another example.

That said, can you be arrested and taken to the scene of the crime? Rather then just straight to the station. I GUESS you could??

Just ended. Made my day.

Definitely not a tradition among my Hungarian descent family (I’ve never heard my parents listen to a pop song in my life) nor my Chinese descent in-laws. In fact, I’m not sure I ever heard the song. I might be a little too young for it.

I played it for my grandson last year. He was 20 at the time. He found it exceedingly boring and now shudders whene’er I mention it.

Just listened to the original recording (I’ve got the album) and I still love it.

My husband and I watched our favorite version on YouTube last night. It’s animated. I’m pretty sure that the link is posted somewhere above, as this is an old thread. My tablet fights with me when I try to post YT links but I’ll try.

Of course I listen. I’m not proud…or tired of it.

I’ve been listening to this song 20 years, I could listen for another 20 years.