Is there ANY literary value in the white supremacist tome "The Turner Diaries"?

Before we begin, I HATE white supremacists, anti semites, etc etc. I think they are all dumb rednecks that need to be moved to Garbage Island.

But I have to admit, just from a reader point of view, I am fascinated by the plot of this infamous “novel” which BTW was an inspiration for the Oklahoma bombing: 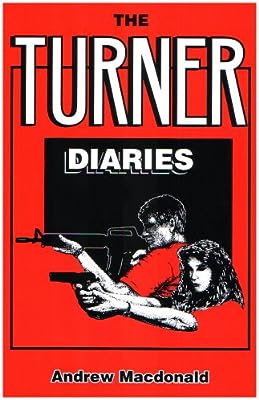 I guess I have a morbid fascination with the book the same as I have with “The Man in the High Castle” but making it darker, unlike Castle the author of Turner, a white supremacist, sides with the bad guys.

Does that alone disqualify it as a well written work? I’m not as interested in checking it out if the writing is complete amateur hour trash. Would it be valuable in understanding the alt-right ala studying Mein Kampf?

No, it isn’t well written. It’s about what you’d expect to find on fanfiction.net from people who think the wrong side won World War II.

Where is Garbage Island? Can’t seems to find it on Google Earth.

Where is Garbage Island? Can’t seems to find it on Google Earth.

I have no idea, and I have no desire to go looking. Mein-fucking-Kampf could be up there with Tolstoy, but I’m not going go reading it just to find out.

And Mein Kampf is a crappily written book. Basically a rambling plolmenic pretending to be an autobiography. That’s a common point of view, and I did personally skim bits of it, to see for myself. A-yup, its correct. I’m not a literary reviewer, so I don’t have to study the whole thing and make a through review.

You can probably read a bit of The Turner Diaries online or in the library, and make up your own mind. So it was inspirational to Timothy McVeigh? Is that, in some way, a testimonial? What other literature was inspirational to that particular guy? Don’t keep us in suspense. I wonder if any Nazi’s claimed Mein Kampf was inspirational? I don’t think I’d ever heard that. I think I’d heard some of them found it dull.

I’d never heard of Man in the High Castle until I began to see adverts for the show. Apparently, they made a great show about it. That doesn’t mean it was that great of a book, only that there was enough to adapt for the screen.

They never (so far as I know) made a move version of The Moon Is a Harsh Mistress. By many people’s standards, that’s a great sci-fi novel, but it just doesn’t translate to visual medium.

Now, when I read Starship Troopers, I never really felt that it was a fascist novel. Maybe I simply missed it as a kid, but it is set in a different time, so values are different. However, the movie carefully sanitizes out any fascism.

Look, people think on Amazon, that How to Eat to Live, Book 1 by Elijah Muhammad is gripping and oh so insightful. You can read the text online, like all propaganda books, it just repeats itself again and again.

No, it isn’t well written. It’s about what you’d expect to find on fanfiction.net from people who think the wrong side won World War II.

I got to read one chapter and I agree, it was lousy literature. Maybe not functional-illiterate bad but that bit was low-tier dime-novel level, heavily burdened with tacked on exposition of white supremacist rantings.

I’ve read it twice. It’s actually incredibly fascinating going in because of how absurd everything is but also getting the point of view of a white supremacist in the 70’s. It’s interesting to see them consider Arabs and Muslims as “Allies” for fighting the Jews for example. It’s also full of bizarre plot holes and the White Supremacist Army of about 1,000 people is somehow able to occupy all of Southern California. Think about that for a second, a group of 1,000 people with just basic rifles and shotguns are able to take and hold an area with 20 million people in it. The police would have easily run right over them, let alone fighting the actual National Guard which happens in the book.

Now, when I read Starship Troopers, I never really felt that it was a fascist novel. Maybe I simply missed it as a kid, but it is set in a different time, so values are different. However, the movie carefully sanitizes out any fascism.

What? Verhoeven deliberately made the movie even more fascist.

Verhoeven stated in 1997 that the first scene of the film — an advertisement for the Mobile Infantry — was adapted shot-for-shot from a scene in Leni Riefenstahl’s Triumph of the Will (1935), specifically an outdoor rally for the Reichsarbeitsdienst. Other references to Nazism in the movie include the Nazi-German-style uniforms and insignia of field grade officers, M.I. working uniforms reminiscent of Mussolini’s Blackshirts, Albert Speer’s style of architecture, and its propagandistic dialogue (“Violence is the supreme authority!”).[10]

I’ve not read either The Turner Diaries or Mein Kampf.
In The Rise and Fall of the Third Reich, William Shirer describes Hitler’s tome as incredibly turgid. He also says many people bought it without reading it because the Nazi Party pushed its sales. I think he quotes one Nazi as joking it was the least-read best-seller in history.

The Turner Diaries are better than Mein Kampf, if for the prose style alone. I used to read German, and even in translation the flaws of Herr Schickelgruber are more than apparent.

The Turner Diaries are just white supremacist wish-fulfillment fantasy. The major flaw from a literary point of view is that it is all build-up and no punch line. It’s easier to read than Hitler, but so is Ayn Rand, and for many of the same reasons. At least Rand is actually trying to sell her ideas thru her writings. I don’t see why someone who read TTD without already being a white supremacist would be overcome by it - there is not much “it” there.

I don’t think there is much comparison with Starship Troopers, which you, or at least I, can read without buying into any of the politics behind it.

I think the comparison to fanfiction is apt. It was written by someone with more enthusiasm than literary skill, just like Mein Kampf, and it shows.

To find out how the other side thinks?

I would argue that Mein Kampf has value if you’re doing research, like writing a book or doing a report or something on the Nazis or Hitler. Sometimes you have to delve into the ugly stuff.

To find out how the other side thinks?

I would argue that Mein Kampf has value if you’re doing research, like writing a book or doing a report or something on the Nazis or Hitler. Sometimes you have to delve into the ugly stuff.

Hmmm. Maybe. I understood the OP to mean some kind of artistic value; some artistic quality of the writing.

So I’ll stand on the “Sewer-Rat-May-Taste-Like-Pumpkin-Pie-But-I’ll-Never-Know” philosophy. If I need to understand how the other side thinks, I’ll read up on some history books about WWII, and pay close attention to the sections dedicated to the Holocaust, the genocides and death camps, and the Einsatzgruppen.

What? Verhoeven deliberately made the movie even more fascist.

Oh wow…I read that as “Satirizes the fascism.”

Denise Richards and Whassisname being “Beautiful pilot/Lead” are also quite intentional.

And for a little twist, lets cast Michael Ironside and Clancy Fucking Brown and get us to sympathize with them cause they’re so fucking badass.

…telling you to NEVER google “Operation black guy to the front”.