My heart goes out to the Carter family. Its tough losing a loved one but especially hard during the holidays. The grandson was still so young and that family is known for members living well into their eighties and nineties. Jimmy Carter said during his regular Sunday school lecture that his grandson, Jeremy, had died. 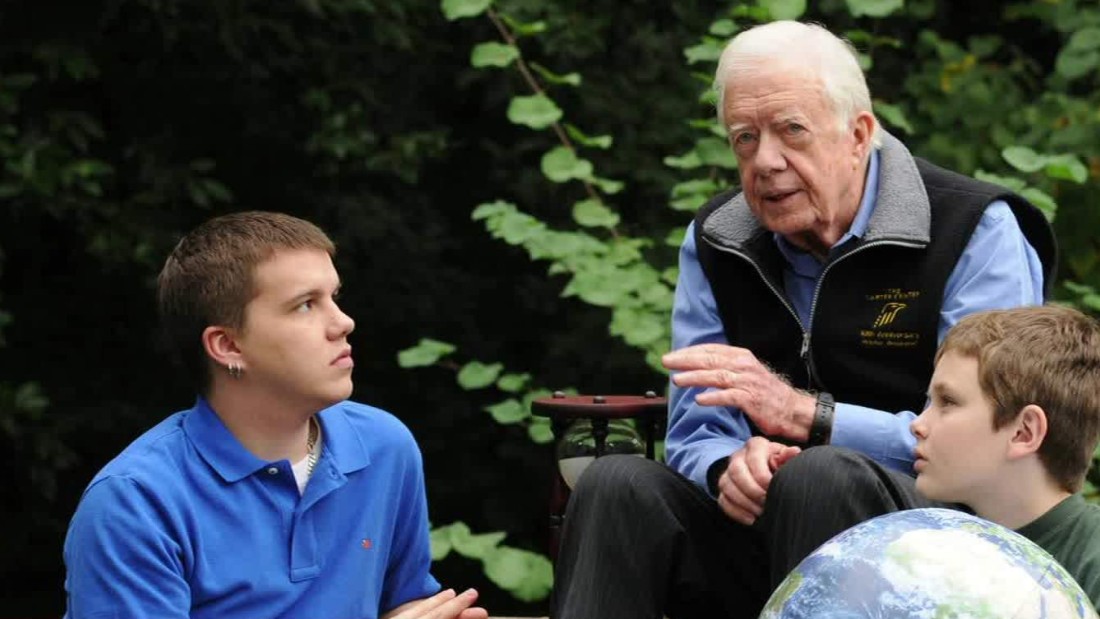 Carter, 91, made the announcement during his regular Sunday school lecture in Plains, Ga., although he apologized for being late — the first time ever — and described how only a few hours before, relatives tried unsuccessfully to revive his grandson, Jeremy, with CPR.

“When he got ready to eat supper he told his mother that he thought he would lie down awhile,” Carter said. “His heart quit beating.”

The younger Carter’s heart stopped, the minister said, and the family tried CPR and rushed him to a hospital.

“They were trying to keep his heart going and eventually, later in the night or the wee hours of (Sunday) morning, his heart stopped,” Shoulta said.

Who was Jeremy’s mother? Carter only had one child, Amy. But Amy’s child is listed as Hugo James Wentzel. Amy Lynn Carter (born October 19, 1967) is the daughter of former U.S. President Jimmy Carter and Rosalynn Carter. Carter entered the limelight as a child when she lived in the White House during the Carter presidency. Amy Carter was born on October 19, 1967, in Plains, Georgia. In 1970 her father was elected Governor of Georgia, and then in 1976, President of the United States. Amy was raised in Plains until her father was elected governor, whereupon she moved with her family into the Georgia ...

CNN said. Different name. I googled Jeremy Carter and thats who died but no mention of who the mom is.

The grandson, Jeremy Carter, had not been feeling well and laid down to take a nap Saturday, Maranatha Baptist Church Rev. Jeremy Shoulta told CNN.

Who was Jeremy’s mother? Carter only had one child, Amy.

Carter has only one child who was still a minor when he was president; that was Amy. He has three older sons.

Jimmy Carter has four children. Amy was the only one still at home during his Presidency.

Horrible for this to happen any time. Now is the worst.

Terrible news. It’s been a year to forget for the Carter family. Deaths like these, that seem to happen at random and to young, healthy people, are the most terrifying thing to me — an ultimate reminder that life is not fair. It says a lot about President Carter’s character, however, that he went on to teach Sunday School that day.

Carter has only one child who was still a minor when he was president; that was Amy. He has three older sons.

Interesting. I was in high school during Carter’s presidency. I’ve never heard any mention of his sons before. His brother got a lot of press attention and so did Amy. Never a word about Carter’s sons.

Thank you for setting me straight.

I’ve lost several younger relatives and this story hits home. Very hard. It hurts to see a kid grow up and then die. Can’t help but think of all the things they might have experienced and accomplished in life. But it wasn’t meant to be.

He talks about his sons in his books. The grandson was arrested for burglary and marijuana when he was 17. I hope this is not drug related.

Wow. I’m not sure I new that JC has three sons, either. (Now, I can’t get that tune and that image of the yoyo out of my head.)

The sons have largely stayed out of the public eye. Amy has not; she’s long been a social activist and now works at the Carter Center. I wouldn’t be surprised if she takes over the helm when Jimmy dies.

The sons have largely stayed out of the public eye.

Except for his son Jack, who ran for Senate from Nevada. (Jack’s son Jason was a Georgia state Senator and ran for Governor of Georgia.)

And one of his other grandsons helped bring the video of Mitt Romney’s “47%” speech to public attention, earning a personal “thank you” from Obama.

Except for his son Jack, who ran for Senate from Nevada. (Jack’s son Jason was a Georgia state Senator and ran for Governor of Georgia.)

Forgot about them! Sorry.