Julián Castro: Running for President in 2020?

On the subject of his presidential aspirations, he gave the clearest indication yet about his plans for 2020. “I’m likely to do it,” he tells Rolling Stone. “I’ll make a final decision after November, but I’m inclined to do it.” 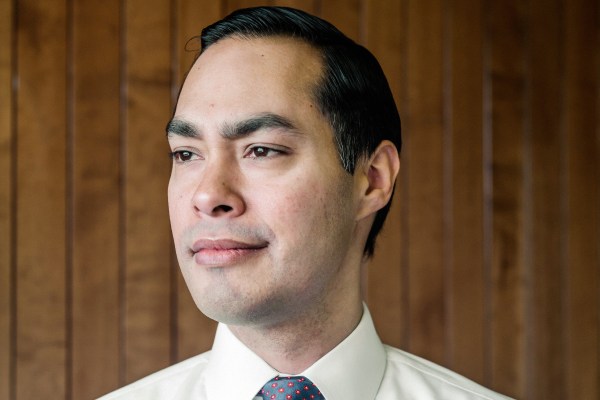 Julián Castro Gives His Clearest Signal Yet He's Running in 2020

The Texas Democrat talks about why Latinos aren’t fired up this year, how the Democratic Party must change and his own political future

Both him being Hispanic and the name “Castro” would seem to be negatives for him.

Both him being Hispanic and the name “Castro” would seem to be negatives for him.

Do you live in the current US that elected Donald “build a wall” Trump?

But your point about Obama being a tough name was the same I was going to make.

Do you live in the current US that elected Donald “build a wall” Trump?

All those people have assured me they love legal immigrants. Nothing against Hispanics per se. It’s about borders and such.

All those people have assured me they love legal immigrants. Nothing against Hispanics per se. It’s about borders and such.

The guy who came closest to beating Trump in the primaries was Ted Cruz. I think politics trumps ethnicity for Castro, who is a Democrat. of course.

Well, he was Secretary of Housing and Urban Development. Those are the guys who always become President in disaster movies when the rest of the line of succession gets killed. So he’s got the experience.

Wow, future candidates are usually more coy than this. I don’t think Julian has the gravitas or the charisma. My 2 cents.

You are right on both counts. His being Hispanic would be a positive and simply because his last name is Castro isn’t going to be a big deal…it’s not like he’s directly related to the Castro’s in Cuba.

Not sure if his politics will be an issue, since I don’t actually know that much about him. Perhaps he’s not progressive enough for the Dems or too progressive for the Independents. But the fact he’s Hispanic isn’t going to be any sort of negative except to people who would be unlikely to vote for him (or any Democrat) anyway.

he could be a guy who drops out before votes are even cast. There are a few of those each election, for example last time Scott Walker and Bobby Jindal dropped out in 2015.

I keep asking you touts to link to speaking by your candidates, perhaps at a National Convention. Or when he talked to Stephen Colbert almost three years ago. (Hillary considered him for V.P. She probably would have won had she chosen him.)

I’m changing my mind again. I hereby instruct all my delegates to cast their votes for
Julian Castro in 2020!
[throws confetti]

I’d be interested in hearing what the actual case for Julian Castro is aside from his identity. Did he have major accomplishments at HUD? Does he have innovative policy ideas that other candidates don’t?

I’d be interested in hearing what the actual case for Julian Castro is aside from his identity. Did he have major accomplishments at HUD? Does he have innovative policy ideas that other candidates don’t?

As mayor of San Antonio (one of the youngest big-city mayors ever), Castro created SA2020, a community-wide visioning effort which is now a successful non-profit. Castro also established Cafe College, offering college guidance to San Antonio-area students. He helped expand pre-kindergarten education, working with top businessmen to get a sales tax hike to fund it.

Homelessness is a serious problem in America, especially in the wake of the mortgage foreclosure crisis. Under Castro’s leadership, veterans’ homelessness was cut dramatically; families were able to find homes again. New apartment buildings were provided with Internet, and so on. In fact, I think there are some spectacular numbers associated with recent Housing and Urban Development. (Detroit is just one of many examples of Urbs that have Developed despite GOP sabotage.)

Were all of these projects his own personal ideas? Of course not; some of these programs were spearheaded by Barack and Michelle Obama who themselves got ideas from others.

But that’s the wrong question. The Marshall Plan wasn’t Truman’s idea; it wasn’t even Marshall’s. President Eisenhower is given huge credit for the Interstate Highway Plan — that was FDR’s idea! We don’t hire Presidents for their creative ideas anymore than the President of Intel was chosen to layout the difficult high-speed multiplier circuitry. There are many thousands of creative people; we’re looking for the guy with a sign on his desk reading “The buck stops here.”

But I hope you do the research and lay out the details of Castro’s run as Mayor and HUD Secretary. A good record will give people a reason to vote for him.

The three most important qualities in the D nominee must be Electability, electability, and electability. In happier days we might have proposed Competence as a tie-breaker: Even G.W. Bush might have been better than an incompetent Democrat. But these days aren’t those days. For the coming Presidency, the 4th criterion in selecting our nominee must be: Likelihood of winning the general election.

He has far more charisma, integrity, experience, gumption and vision than Rubio; and Rubio was touted as a front-runner last cycle.

But I agree: we’d prefer an older experienced guy. But only Joe Biden comes to mind. He’d be 78 years old when inaugurated for his first turn.

“Eighty is the new seventy”? Fine, but look at the history of 70-year old Presidents:
[ul][li] Before Reagan and Trump, Eisenhower was the very first President to ever be in office at age 70. And he was a young 62 when first inaugurated.[/li][li] Before Eisenhower, only five men aged 59 or more were ever elected to a first term of President. (Adams, Jackson, Harrison, Taylor, Buchanan.)[/li][li] When Bush-41 was inaugurated at age 64, he was older than all but two prior first-inaugurees (Harrison, Buchanan). Removing the “first” stipulation adds only three names (Jackson, Eisenhower and, by just a few days, Truman).[/li][/ul]

Please note that I love Joe Biden, and think he would make a fine President and fine campaigner if physically able. I do worry that the hateful GOP liars would make a big issue of his age. And I worry that over the next two years he will develop a chronic illness or show visible aging. Old age can come quickly when you’re approaching 80.

Other than Joe Biden, what solid performers of age and experience do the Democrats have to offer? Zero. Nada. No Dem Senator is electable. In desperation names like Michelle Obama or Oprah Winfrey are being touted. :smack:

It only takes one person to come out and inspire. It shouldn’t freak you out that we haven’t seen that yet, since the campaign hasn’t even started yet.

Potential: Landrieu, Garcetti, O’Rourke. Those are all charismatic white men with the potential to raise tons of money and deliver a solid message.

Well, white Hispanics like Ted Cruz or Marco Rubio just have to start talking about putting up a wall, and they’re good to go.

I’d be interested in hearing what the actual case for Julian Castro is aside from his identity.

Why should he have anything more than identity? Trump got elected entirely on an identity, and it was a bogus identity at that.

Identity comes more into play as VP than as the top of the ticket.

And there is no path for him to get the nomination this time around. He won’t wow with a shocking top performance in Iowa or NH, too many are too strong there. And without a strong performance there then even prevailing on Texas home turf will be tough. Being strong outside of Texas will require an infrastructure that he does not have.

He is not the best speaker of the likely bunch and listening to that speech I have no sense of a vision. He sounds pretty wooden to me.

Electability means having that path, having that vision that can unite enough of us, and the orating chops. Maybe he will develop those things someday?