McGregor got his ass handed to him. He didn’t stand a chance against Nurmagomedov. The photos of McGregor’s battering are brutal.

He went too far running his mouth, attacking the guy’s religion and so on. This match got personal for Nurmagomedov.

It’s a shame it spilled out into fighting after the match.

I suspect Nurmagomedov will get suspended for quite awhile. There shouldn’t be a rematch. There’s too much bad blood between these two men. 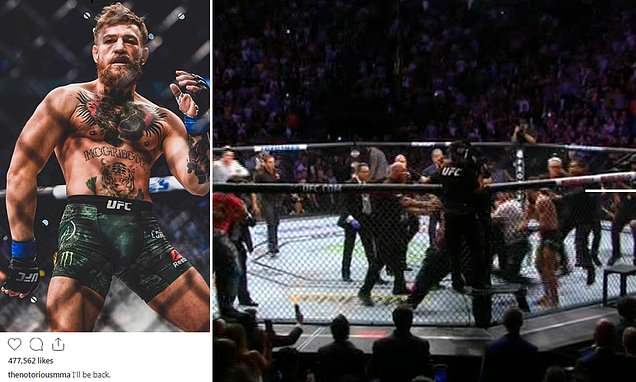 Khabib Nurmagomedov produced a career-best performance in Las Vegas to defeat Irishman McGregor who was making his return to MMA after a near two-year hiatus.

Furious UFC president Dana White said: 'A lot of bad stuff happened after the fight, a lot that shouldn’t happen.

'Khabib jumped over the cage going after one of Conor’s guys and all hell broke loose. I don’t even know what to say right now. I’m disgusted and sick over it.

'I’m so disappointed. I’m one of the guys who has worked 18 years to get this sport where it is today. 'It is super personal to me. I have worked so hard for so long.

‘It is just so disappointing. It should have ended with Khabib walking out a champ but it didn’t.’

McGregor got his ass handed to him. He didn’t stand a chance against Nurmagomedov.

Not sure we were watching the same match. Yes, Nurmagomedov was the superior fighter, but McGregor had a great third round I thought. It wasn’t -that- one-sided.

Also, I hope the throw the book at Nurmagomedov for has ass-clown move.

I wouldn’t be surprised if they strip the title from Nurmagomedov.

This fight and the fight afterwards looked more like WrestleMania then MMA.

They have to put a stop to this nonsense. Or MMA will lose its credibility.

Not sure we were watching the same match. Yes, Nurmagomedov was the superior fighter, but McGregor had a great third round I thought. It wasn’t -that- one-sided.

Yeah, McGregor had the third, and was putting up a pretty decent fight. He took a hell of a beating in the second, and somehow made it through, which amazed me. I thought with his performance in the third, though, that perhaps he had a bit more left in the gas tank (especially after watching some rather amazing momentum sways in the earlier cards.) I’m not really much of a UFC watcher (this may be the only time I’ve really watched a full slate of fights since the early Shamrock and Gracie years) but I wouldn’t have characterized Colin’s performance as him getting his ass handed to him, and I was rooting for Khabib. IIRC, one set of unofficial scores I saw somewhere had the bout 10-8, 10-9, 9-10 at that point.

As for the post-match mayhem, that was ridiculous. I understand the bad blood between these two guys and McGregor’s provocations but, holy shit, you have to do something.

I wouldn’t have characterized Colin’s performance as him getting his ass handed to him, and I was rooting for Khabib.

Dammit, I mean, Conor, of course. Don’t know why I have Colin on the mind.

Reading all the post-match coverage, it does seem there’s a consensus that Khabib was clearly dominant and that McGregor wasn’t doing all that well. That’s not how I saw it, but, like I said, I don’t watch a lot of UFC, so to those more versed in the sport, there was clear and obvious dominance being shown.

Nope. McGregor pretty much got a beatdown. Hell I counted at least 4 fouls (grabbing the cage, kneeing a downed opponent, grabbing the shorts, and strikes to the back of the head) on McGregor. Nurmagomadov looked like a punk jumping out of the cage to brawl with McGregor’s BJJ coach and two of his crew rushing the cage to attack McGregor.

The most telling thing is McGregor quit pure and simple. That wasn’t a rear naked choke it was a jaw crank. He was tired, trapped, and wanted it over. Unless it comes out his jaw was broken that hold shouldn’t have had him tapping.

I was actually suprised Kabib was hunting for submissions at all. He tried a head and arm triangle and a Kimura before the jaw crank. If you are that irate that you’re jumping the cage then do what you said you were going to. Hold him down and rearrange his face with elbows and punches.

Both fighters may be at fault here. 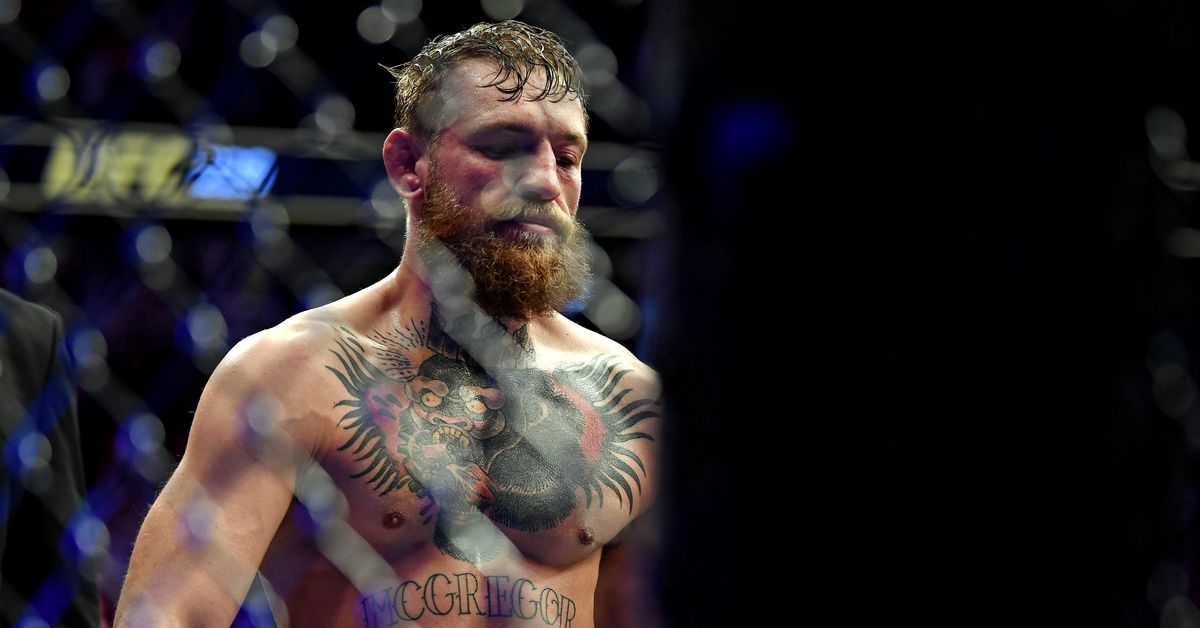 What you may have missed from last night

Khabib flew feet first into the crowd like an Eagle. This wasn’t a stunt. He was really going after Danis.
Another angle shows what the main cameras did not: McGregor following Khabib to the fence, leaping astride it, and then slugging one of Khabib’s teammates who also climbed the fence before getting jumped by two Dagestanis. They were later arrested, but released after McGregor declined to press charges.

Another angle shows McGregor clocking the first fighter to rush him, then get punched from behind

The real concern was that the brawl could get someone killed in Vegas. This fan got knocked cold. Hopefully no one suffered life-altering injuries last night.

The difference in stamina was obvious. McGregor ran out of steam long before. It pains me to the core to say this.

Kabhib’s behavior afterwards was appalling. The look on his face as McGregor tapped out made it clear he was not ready to stop fighting. I suspect a blood test afterwards might be enlightening.

I hope they got one. Does anybody here know what the protocol is?

Yes: in Nevada there is a post-fight drug test.

I saw the fight and I thought CM was beat pretty much from the start of the fight. KN was really aggressive with that full body leg lock thing that he does and then he just squeezes like a motherfucker for as long as he can. CM was tired of it after about 2 minutes.

But hooo boy he must have been talking some serious smack in the ring. He’s lucky the guy didn’t kill him in front of 20,000 fans (and the TV audience).

I wouldn’t be surprised if that drug test is clean. Conor gave him plenty of reasons to want to kill him.

One of ESPN’s analysts gave McGregor the first and third rounds 10-9, but Nurmagomedov got the second 10-8. Then again, another said that Nurmagomedov “easily” won the first round. Who knows where a judges’ result would have ended up.

One of ESPN’s analysts gave McGregor the first and third rounds 10-9, but Nurmagomedov got the second 10-8. Then again, another said that Nurmagomedov “easily” won the first round. Who knows where a judges’ result would have ended up.

Oops. I should have that as 10-9, 10-8, and 9-10. The second round was the round that Khabib most clearly dominated. I thought Conor was getting knocked the hell out there, but he survived, so I was wondering if he could pull some rope-a-dope type shit and get Khabib winded. I though Khabib actually looked vulnerable in the third. Surprising to see someone gave Conor the first, though.

On the other hand, everybody else, it seems, thought Conor was getting the shit kicked out of him.

Or MMA will lose its credibility.

Both fighters may be at fault here.

I’m laying very little of the post-match stuff on CM. When he saw Khabib going after his corner he decided to rush to join the fray. Not ideal, but natural. When he sees one of Khabib’s guys on the fence alongside him, looking to joint the fight as well, he swung at him. It’s basically 2 guys joining an in-progress fight. MacGregor didn’t “start” a second fight in the ring.

I will add that the original narrative that CM got jumped in the ring is inaccurate. Khabib started a brawl, basically a gang fight, and everything else was just collateral damage.

Upon some contemplation what Kabib did is no worse than McGregor’s antics (bus attack, jumping into the cage and pushing a ref) the UFC is reaping what they sowed by letting McGregor get away with his antics to sell fights. I’m now hearing talk of a rematch which is ridiculous. You can run that fight 100 times and 99 of them go the same way. Maybe a few years down the road, but for now McGregor has no answer for Kabib’s grappling and he may never will. Better Diaz 3 than that fight again.