DC’s Legends of Tomorrow is coming back on Oct 13. Note the change in schedule; the show airs on Wednesday now.

Dominic Purcell (Mick Rory/Heatwave) has left the show, though he may be back for some guest appearances. Notwithstanding that the Waverider got blown up in last season’s finale, Amy Louise Pemberton (Gideon) is still part of the main cast. Matt Ryan is also still listed, but playing a different character.

COMFORT ZONE - After defeating the aliens and saving Earth, the Legends find themselves stranded in 1925 Odessa, Texas with a destroyed Waverider. Wanting to help fix things, Astra tries using her powers, which creates unwanted attention from the town and that of the new Director of the Bureau of Investigation, J. Edgar Hoover, and a surprise no one expected. Realizing they need to escape, Sara and Ava create a distraction by going on a crime spree with Hoover hot on their tails. Meanwhile, Zari is finding it hard to get over Constantine, so Behrad suggests the only thing he knows that can help.

This episode was a serious of increasingly ridiculous events. Classic Legends.

Plus Astra tried to reassemble the Waverider, but created Gideon in human form instead. 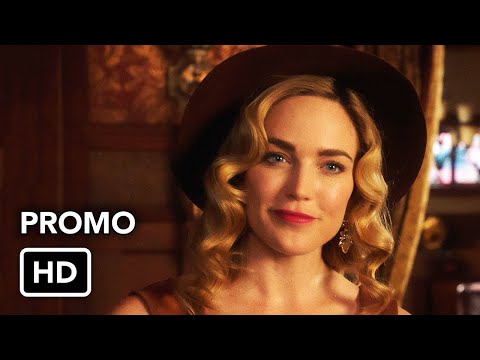 A TICKET TO RIDE - While the Legends contemplate how to get to New York City, Behrad discovers Hoover has train tickets to DC and Sara and Ava come up with a plan. With the help of Gary, Nate will have to impersonate Hoover, but he soon learns it is harder being Hoover than he expected. Since Zari is stuck without the internet, she is forced to take a digital detox and becomes obsessed with figuring out who blew up the Waverider. Meanwhile, Astra and Spooner have stayed behind in Texas and are dealing with the aftermath of Astra’s special spell.

The writers really like to play with us, the viewers. Case in point: Gideon, the voice of the Waverider, initially had no voice in human form. Fortunately, that only lasted until the end of the episode.