Lindsey Vonn out - Ski team can finally focus on Sochi.

The Lindsey Vonn saga was beginning to overshadow the entire US ski team. She’s been a great champion but clearly her knee isn’t up to the stresses of competition.

The comeback is on ice as Lindsey Vonn's knee troubles are too much to overcome in time for Sochi.

Who are our best skiers on this Olympic team? Have we got some gold medal prospects?
I haven’t seen any profiles of the ski team. I need to see who we have this year. The ski events are some of my favorites in the winter sports.

Ted Ligety, Bode Miller, Mikaela Shiffrin, and Julie Mancuso are all good medal prospects. While Lindsey Vonn has been getting some press there have been plenty of stories on the other successes on the World Cup this season. I think Ligety and Shiffrin are the most likely to medal in alpine events right now.

It will be interesting to see how things go at Adelboden this weekend.

Mikaela Shiffrin could do well. 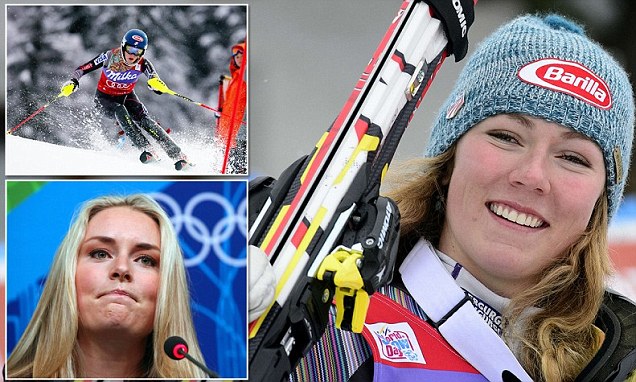 The 18-year-old won her second World Cup slalom of the season Sunday, displaying her ability to deal with all types of conditions a month before the Sochi Olympics.

American teenager Mikaela Shiffrin fought through snow, rain and deep ruts to win her second World Cup slalom of the season Sunday, displaying her ability to deal with all types of conditions a month before the Sochi Olympics.

The 18-year-old led by 0.03 seconds after the opening run and ending up winning by 0.13 ahead of Maria Pietilae-Holmner of Sweden for the sixth victory of her career.

‘I was really psyched to win again,’ said Mikaela, who was 12th and second in her previous two slaloms.

Mikaela Shiffrin could do well.

Shiffrin is being set up as the darling of the U.S. Olympic team. Her face is everywhere in the ski world. I think the sponsors and the USOC haven’t been counting on Vonn being able to compete since she got the injury last year.

The only problem is that Shiffrin is a slalom specialist, and all the badasses ski the downhill.

Shiffrin looks a lot like Willow Rosenberg. That’s reason enough to root for her, I’d say.