Lyrics you insist on singing wrong

We said this summer we’d go down to Cancun, but COVID-19 makes that kind of hard to do.

The second version I imagine being sung by Ted Cruz.

We said this winter we’d go down to Cancun, and the big freeze makes that kind of easy to do.

With apologies to Sammy Davis, Jr…

Damn, I’ve been singing that too, for the last few years. Damned prostate . . .

Original:
You picked a fine time to leave me Lucille
With four hungry children and a crop in the field

Revised:
You picked a fine time to leave me, loose wheel
With four hundred children and a’coppin’ a feel

Original:
He don’t love you (and he never will) like I love you

Revised:
He don’t love you (and he can go to hell) like I love you

And of course, the original was
Blinded by the light; revved up like a deuce, another runner in the night.

That reminds me (and I believe I posted it in the YOUR mis-heard lyrics thread).

When I was a kid there was a song they played all the time called ‘You Sexy Thing’. Being a kid, with an AM radio, I heard the lyrics as, and still think of them as:

(The actual lyrics are: I believe in miracles / Since you came along / you sexy thing)

Two from my childhood:

I doubt that it was a hit in the US and anybody of you knows the song, but “Zabadak” was a one hit wonder by the Saragossa Band in Germany in the late seventies. We always used to sing it as “Schlabbersack”, which roughly means wiggly scrotum. 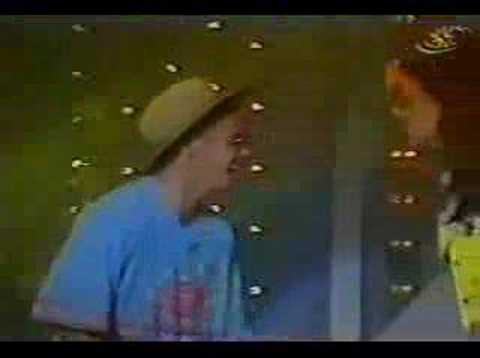 The other is Boney M’s Rasputin (which more people will know), in which we sang instead of

Ra-Ra-Rasputin, lover of the Russian Queen

Yeah, we were silly as children. Of course I still sing them that way when they are played on the radio.

Strangers, racin’
Up and down the boulevard
Their tires
Turnin’ in the night
Streetlights turn green
Hopin’ just to find some traction
Runnin’ somewhere in the night

Bruce’s got nuttin’ on Journey for car songs.

(but yet, I insist on calling the song “Don’t Stop Breeding”. go figure)

In One Week by BareNaked Ladies, there’s a line where they sing “like Harrison Ford, I’m getting ‘Frantic,’ like Sting, I’m tantric, like Snickers, guaranteed to satisfy.”

My tongue just cannot do the gymnastics needed to ever sing that line correctly.

Gray skies are gonna clear up…sit on a happy face