Felareth says "I agree. I would hate to think that in order to fulfill our comission we have to disassemble this suit of armour. Not that I can wear the thing; it would need to be retailored for me, and other people can fit into it easier.

"Once we have taken enough, butnot so much as to burden ouselves, telling the Dwarves nearby so they can put the wealth into good hands seems right to me.

"As for the machine, it can be loaded on my floating disk, but that spell only lasts an hour at a time. I can perform a ritual to recast it as often as needed, but it takes 10 minutes to do so. I suppose we can wait until tomorrow, but a day’s travel will exhaust my capacity to cast spells, leaving nothing if we get attacked.

“Also, I don’t know whether I can ride a horse (assuming you can dignify my efforts with the term ‘ride’ as I have to cling on for dear life). I suppose we could experiment. Certainly I can carry it out of the cave on a disk.”

NETA: I omitted a phrase.

“Also, I don’t know whether I can ride a horse

should say “Also, I don’t know whether I can ride a horse with the Disk floating behind me.”

Felareth spends a little time thinking about the layout of the lair.

"I think it might be worth searching closely where the trolls look to have excavated a bit extra for their lairs. In particular, Loo appears to have done some digging, and I think Gummer and Seji may have done so as well.

“I propose that we look carefully around that area and see what we can come up with.”

Bitur will try to rig something up like a sledge or such to make the machine more transportable. He also agrees with informing the dwarves about the treasure the party does not keep for themselves.

If we have taken what we need we should let the local Dwarves know.

Ceol agrees with this. He will continue to help with the search for the galvorn, assuming that there is some sort of secret hidey-hole that we’ve missed in our previous searches.

Thinking about carrying the machine:

Presumably Bitur could rustle up some strapping for the Bear or a sledge for the Warhorse.

So Bitur can see several tricks to packing & moving the machines. In a short time he can build a crate for the machine and rig it either for Grávund to carry or as half the load for a pack pony.

No other Galvorn has been found, those 12 links have to be what you were sent for.

The Dwarves are certain, the excavations were just to smooth our and increase sleeping areas. They’re both good at this kind of stuff.

When Miregol checks in 2 hours later, she relays, “Please, leave the cave. As Felareth said, take what you want that won’t slow you down. I’ll let the Dwarves know to retrieve the rest. Those 12 links should be plenty.”

As for taking stuff, there is 25.5 pounds of gold. A very nice bonus. You could also take the full set of chain mail that has the Galvorn in it. It appears to be extra well made. Did you want any of the silver?

If we can bring it along and still maintain a decent rate of movement, I’d say we should bring the silver with us, too. Or we could leave it for the Dwarves as a thank-you of sorts.

Let’s take as much as we can carry. There will be plenty for the locals.

“I agree, Ghan. We were sent here for the Galvorn, and this seems to be the only supply.”

Bitur will build a crate for the machine and set it up so that Grávund can carry it. Unlike pack animals, Grávund won’t tire, and is easy to repair if anything happens.

Date: May 28 Hejren Portents : 15, 20
The party packs up the chainmail with the 12 links of Galvorn, the 25.5 pounds of gold (50gp/pound) and the carefully crated magical machine and timer. They leave the silver for the Dwarves appears to be the consensus.. 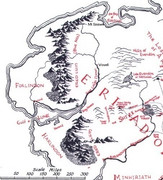 Returning will be a little easier as heading downhill and much better understanding of the way to go. 5 days will probably get you to Wovell . It sounds like Mirëgol will meet you before than though.

As the group heads down the mountain, Mirëgol is checking in every few hours. She’s got a small group together going by boat and Hobbit archer named Sandy Proudfoot will be traveling with her.

Date: May 30 Hejren Portents : 20,8 (2 days later)
Around noon, the Windwing & Aithorn notice the party is being followed by Crebain. The foul huge evil crows of the enemy.

Ghan comments “We’re fully healed and have all our spells back. But these creatures are the eyes of the enemy. We must be ready for an ambush.”

Is there any cover (e.g. trees) that we could use to conceal ourselves?

Not any cover that would allow you to keep up your pace. They’ll probably be following you for hours though.

“Foul birds,” Ceol says. “We must assume that our movements have been tracked, and an ambush or the like has been set for us.”

Is it in range of my crossbow?

Crebain typically travel in large flocks. I doubt you carry enough crossbow bolts to kill but a small portion of the flock - although doing so might (but I doubt it) scare off the rest of them, for a time or for good.

Is it in range of my crossbow?

Just how far back are these crebain?

The crebain tend to fly at over 1000’. They are very sensitive to the arrows of sharpshooting Elves. They’re numbers are growing. From 3 first spotted to over a dozen already. They are fairly intelligent. More akin to a slow human than an animal but focused on scouting, hunting and flying.