Other than that, carry on.

You’re a helluva raconteur, so I hope it works really positively and winds up fuelling some amusing-to-read stories out of it.

Listen, local tractor parts store, you do not need to ‘put me in your system’ to sell me mower blades. Or let me rephrase–I am not buying blades from you if I have to give you contact info.

I try to shop local, but your service already sucked and I’m certainly not giving you a way to contact me at your convenience.

Fuck your new corporate overlord’s policy. I’ll save myself money and buy online from the evil place who already has my contact info.

And I’ll continue to pay my shade-tree mechanic do the upkeep on my riding mower. Y’all were sending me way too much mail about maintenence and storage. I’ll be pleased if that stops.

Listen, local tractor parts store, you do not need to ‘put me in your system’ to sell me mower blades.

Curious, was it Kubota? Because those mfers are on my ignore list. We own a Kubota lawn tractor. We’ve had them pick it up for service twice (it is too big for my utility trailer). Both times they reconnected safety switches that make the thing unusable, saying that they cannot work on a “dangerous” machine. Also, both times they returned the tractor saying it runs fine and they could not duplicate the problem. They were paid and left and the problem recurred the next day.

Thing is, my gf’s 130 pounds isn’t enough to work the seat safety switch and she refuses to bulk up. Also the transmission interlock is overly sensitive. Safe is fine, but if I cannot use the tool that sucks.

Found a local guy who enjoys working on Kubotas and is fine with us bypassing the interlocks so we can start and run the thing.

On a positive note, I can put ‘I lost a wife and a girlfriend on the same morning’ on my list of accomplishments.

… but then, lol, upon re-reading the above I bet that’s more common than I’m giving credit for.

Will you be looking for eight when they pull that gate? (For those not conversant with 80s country music, that’s a reference to the George Strait song “Amarillo by Morning”. )

Also, I agree with Acierocolotl, I hope everything works out for you and you get some stories to share with us.

You’re a helluva raconteur , so I hope it works really positively and winds up fuelling some amusing-to-read stories out of it.

Also, I agree with Acierocolotl, I hope everything works out for you and you get some stories to share with us.

Awww! Thanks! And just for the compliment, here’s one for ya. And the weird thing is? I didn’t remember this until this past Tuesday night.

Like I said, almost everything below except for some of the introductory information was completely forgotten by me for decades until it just came to fhe fore, a memory so vivid that I literally pulled my car over and texted my daughter this story, after I had verified the basic details with my sister. But, no, this really happened. May be a bit embellished… storyteller and all… but here goes:

4 years old, 5 maybe, going to preschool at Papoose Parlor, a Native-American themed prekindergarten done, I’m sure, with all the taste and concern of Native traditions 1972-era white-flight Atlanta could muster. I had mentioned this place in an earlier thread about a time I heard a song so lovely I cried, and… well… that story plus the events of this post indicate I was probably a pretty sensitive, if not odd, child. Shocking, I know.

So… 1971. 1972, somewhere around there, no later than May of 1973. And this was right before the golden age of reruns and syndication, so the big kid entertainment on Atlanta television of this era was black and white 1930s and 1940s shorts. Alfalfa and Our Gang are the most famous, but they also had Abbot and Costello and, my favorites, Laurel and Hardy.

Now, the child is the father to the man, and like the rest of my life would show, when I went after a fandom or an interest, I went at it hard. Screw the mysteries of creation, I want to know. So I peppered my family with questions about L&H, didn’t learn much, but I was impressed by one key fact…

Last day of school. Gonna say 1972 just because. Now, Papoose Parlor was the sort of place that was sought after by what I call the Striving Classes, the subset of middle-class people who are working very hard to become Upper Middle Class, or even… dare I say it… Upper Class. All white, all educated, all management level (still a big thing in 1972) or higher. And one of the Strivers was a person who, I am assuming, worked at Channel 11, WXIA… which was the station which showed Laurel and Hardy. And the Striver had the brilliant idea of getting a pair of L&H impersonators to do a L&H skit during the party thrown on last day of class. The kids would love it, the teachers would get a break, the Striver gets to preen, a good time will be had by all, what could possibly go wrong?

Party begins, things are normal, cake, kids are sent on the playground to burn energy before the show, everything is fine, smiles everywhere.

We go back inside, the teachers telling us about this wonderful surprise, we are just going to love it, just hyping this thing to death. And we sit down, on that tile-linoleum floor that I remember from school, someone turns the lights off, silencing the kids… and, finally, the last “hush” being said… out walks Laurel and Hardy.

And I just fucking freak out!

“BUT THEY’RE DEAD!”, I start screaming. “THEY CAN’T BE HERE, THEY’RE DEAD! THEY DIED YEARS AGO!” (I knew this because Dad said it and if Dad says it, then it’s just a Goddamned Fact.) I’m screaming, yelling at these poor guys who were probably going to get $25 for putting on some overalls and acting nothing like L&H, “YOU CAN’T BE HERE, YOU’RE DEAD! YOU!”… I scream, pointing at one of them… “YOU’RE DEAD! YOU CANNOT BE HERE, YOU…”, a teacher finally having the sense to hustle my four-year old buzz-killing ass out of there.

I don’t know if they finished their show or not, I think I just sat in the lobby until it was time for the parents to come pick us up. Was one of them spoken to? I don’t know.

But the one thing I do know is this:

There was no such program the next year.

Ah, thank you John. (If I may call you that. That IS presumptuous of me.)

Lol, of course. You can even call me JT, I’ll understand who you mean.

A co-worker convinced me to buy a Deere and the equipment itself has been fine. But the local dealer is a shitshow, and I’ve avoided them for everything but parts since intial purchase. I bet our Kubota dealer is crap, too, even though my mechanic works there.

I learned a thing today. There’s a Bulgarian tradition where you gather your neighbours, dig a big hole in the back yard, and then yell at the hole until you get everything out of your system. Then you fill the hole back in.

One of my colleagues is Bulgarian, and we when we’re not talking about work, we talk about other things. Sometimes racia is involved. Today, an invitation to yell at the hole in his backyard, because I am caught in the middle of a scholastic civil war.

I often run a technical programming lab. I’ll put time pressure on students, sometimes they get kind of flakey instructions, I try to give them a taste of what programming as a professional might be. It’s not always glamourous. I give myself the role of senior programmer (read: mentor) as well as boss (final arbiter).

The theory professor in this course, however, is usurping part of my job. Not intentionally, mind you. This person has decided to go off and teach whatever they wanted, with little regard for the actual curriculum. I’ve taught that specific course, I’ll teach it again. It’s not easy material, but it doesn’t warrant teaching “whatever” (that’s the technical term).

As for me, I love a good scrap. I mean, I’m not throwing fists anymore, I’ve outgrown that, but there IS a right side, and a wrong side, and I kind of want to wade in there, except it would be the height of foolishness to get involved. It is hard to keep my mouth shut. I may have once clapped my hands over my mouth to stop myself from saying something I’d later regret.

So instead, I yelled at the hole in my Bulgarian buddy’s back yard, after lubricating the pipes with very potent cherry liquor. That hole is full, I tell you what.

Great story. Kudos to the young JohnT for standing up for what is right in this world. I’m picturing the two guys driving away from the school, windows rolled down, smoking cigarettes (you did say 1972) and one of them saying, “Ahh, showbiz. Ain’t it the life.”

It’s been going on a for a few hours now. There’s a fellow who’s reclining on the sidewalk and he’s not moved for hours. He has found himself two bits of metal and he clangs them together in something approaching a rhythm. He may find a rhythm yet, but it’s definitely not for want of trying.

Sometimes he stops the clanging. He has theories about the universe and he’d love to share them with us, whether we want to listen or not, because he yells them at the tops of his lungs.

These theories include, but are not limited to:

BEFORE THERE WAS GOD, THERE WAS ZOD!
BEFORE THERE WAS LIGHT, THERE WAS VIBRATION!
SUNLIGHT MAKES YOU OLD!
I AM OVER 600 CYCLES OLD AND I HATE EVERYBODY! EXCEPT FEMALES!
I KNOW A VERY POWERFUL SPELL!
I AM DEVOID OF EMOTION. LIKE ZEN. I FEEL NO PAIN.
COPS HAVE SHOT ME WITH GUNS AND THINGS, AND I JUST YELLED AT THEM HAH!

To date, he has not yet cast the spell, so I’m probably alright. If I get cornfielded, his spell may have worked, so be careful.

So instead, I yelled at the hole in my Bulgarian buddy’s back yard, after lubricating the pipes with very potent cherry liquor. That hole is full , I tell you what.

Man, I could really use a hole to scream into, like, on the regular. That’s great.

I think it’s great that we’re getting this for free, whereas the public will soon be shelling out hundreds for his hardcover memoirs (and the graphic novel versions), and his readings on the stadium/campus/talk show circuits…

On a positive note, I can put ‘I lost a wife and a girlfriend on the same morning’ on my list of accomplishments.

… but then, lol, upon re-reading the above I bet that’s more common than I’m giving credit for.

I want to join with the others, @JohnT, in wishing you happier days ahead. As I said earlier, you still have Luna and her unconditional love.

Which reminds me of this appropriate old cartoon from the New Yorker. Hope it puts a smile on your face … 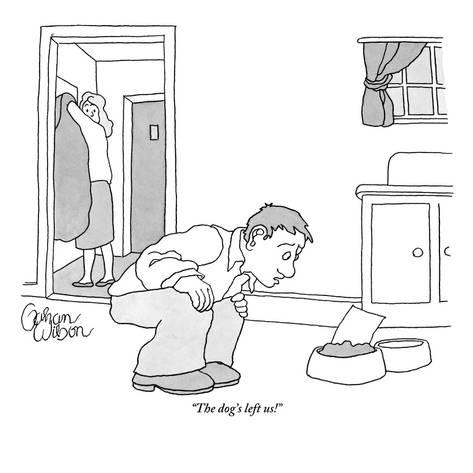 Luna’s 3rd meal for the day was a pork chop. She’s going nowhere.

Hmm. His ideas are intriguing to me, and I wish to subscribe to his newsletter.