I don’t think Last Night in Soho was going for scary. It was a thriller, not a horror film.

In your opinion, was it trying to be scary and failed? Or were they going for something else, like “moody” or “dreamy”?

Scary in the last 30-40 minutes. Not “slasher movie” scary, but unsettling and genuinely scary/creepy. There is a big sequence near the end that is supposed to be pretty overwhelming.

I don’t think Last Night in Soho was going for scary. It was a thriller, not a horror film.

It’s a thriller of sorts, but also a psychological horror movie. If it were more thrilling and scary, it had “movie of the year” potential. It was really well made.

There is a dance scene pretty early with Matt Smith and the lead actresses and it was pretty incredible. Done mostly practically, I believe. Really neat.

Last night in Soho wasn’t scary because it was actually Superman V: General Zod escapes the Phantom zone and Ellie gets stuck in it. Even got a Christopher Reeves like in the young cop.

The Royal Tenenbaums (Amazon). I think I saw parts of it 20 years ago, and don’t recall being impressed. But many years later I saw and enjoyed Wes Anderson’s more recent films very much, and so we went back to try this one again. And loved it.

We’re going to go back and do BottleRocket, Rushmore, fantastic Mr. Fox, and The Life Aquatic now.

Watched Fight Club for the first time a few days ago.

I had zero memory of The Big Spoiler that Rosie announced back when it opened in theaters. Zero.

Came to it just knowing I ought to see it.

Loved it. Was fascinated by the nuanced moments, lines, etc. I will watch it again.

Yea, I also watched Fight Club for the first time a couple weeks ago.

I had been hearing about the movie for many years, so I figured I had better watch it.

Hated it. Terrible story, pointless fighting, and over-the-top acting by Pitt. I couldn’t wait for it to be over.

We’re going to go back and do BottleRocket, Rushmore, fantastic Mr. Fox, and The Life Aquatic now.

If you’re going to watch The Life Aquatic, make sure you watch an episode or two of Jacques Cousteau first. 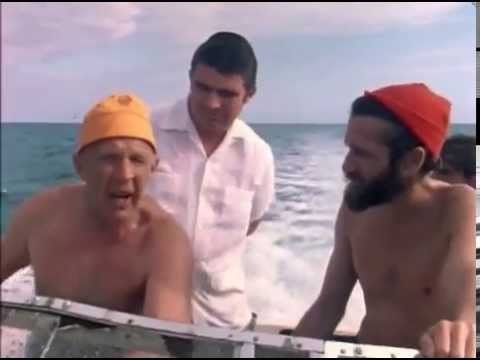 Wes Anderson’s version is only a slight exaggeration.

Just watched The Personal History of David Copperfield starring Dev Patel. It was excellent. Eccentrically written, and with Bridgerton-like disregard for racial consistency casting (David Copperfield starring Dev Patel says it all). Many black actors and actresses in key roles, and Benedict Wong as Mt. Wickfield. It was also a hoot to see Peter Capaldi as Mr. Micawber (a role once played by W.C. Fields) and Hugh Laurie as Mr. Dick.

The production took pains to connect events in the life of David Copperfield with his later writings, which was a nice touch (I haven’t read the book yet, so I don’t know how much importance was placed on this in the original). But, considering that Dev Patel starred, and that he was in Slumdog Millionaire (which showed you, through the main character’s biography, how he had the knowledge he did), it sometimes feels a bit like Charles Dickens’ Slumdog David Copperfield.

Romancing the Stone, a 1984 action adventure romance starring Kathleen Turner and Michael Douglas. This was recommended to me, as I write romantic thrillers and need some case studies.

Rewatched Suicide Squad (the 2016 one). Robbie’s Harley Quinn remains the best thing about it by miles. It’s basically Ghostbusters with more violence. Will Smith spends the entire thing being Will Smith - a few years later and he could have given the same performance from his living room via Zoom. Cara DeLavigne is Cara DeLavigne, and I don’t mean that in a good way either.

But the real achievement is the black hole of anti-charisma that is Jared Leto’s Joker. I mean, he barely manages “creepy stalker” level of menace, it’s impossible to suspend enough disbelief to accept that he could talk anyone around to his way of thinking, and his makeup was just all kinds of bad. Do you think you remember how bad Leto’s Joker is? Trust me, it’s worse than that.

Also watched (for the first time) Batman vs Superman: Dawn of Justice or whatever it was called. The phrase “hot mess” applies here. Also, Ben Affleck is to Batman what Jared Leto is to the Joker. If they ever make a movie with the two of them, it will be “Star Wars Holiday Special” all over again.

Thirsting for the next season of Taboo has gotten me on a 17th-18th century period piece kick lately, last week was Rob Roy, Barry Lyndon, The Duchess, Dangerous Liaisons, Quills and A Little Chaos.

Last night I plunked down a couple of bucks to rent The Favorite on Prime. It was fantastic, an all-star solid cast and cleverly written. For a plot just about petty jealousy and a rivalry for favor each scene was a delight. If I had one qualm it was the ending, I guess the writer felt she had to stick to the facts and reality often has no tidy conclusions but it was a disappointing way to end a tale.

But the rest was great, I am glad I watched it and may rent it again in the future.

Went over to Netflix to watch this week’s Great British Bake Off and they showed me a trailer for Tick, Tick, Boom, so I opted for that instead. It’s a semi(?)-auto(?)-biographical musical about/by/based on the musical by? Jonathan Larson, who later wrote RENT.

It was really good- an enjoyable way to spend the evening. Not so breathtaking as to make it into my top five musicals ever, but I will probably watch it again and it did make me want to see RENT again.

I am currently watching the British fantasy epic “The Tunnel”(1935), (in the U.S. “The Transatlantic Tunnel”), starring Richard Dix and Madge Evans, with Walter Huston as the President of the United States. How they packed that much grandeur and tragedy into a 94 minute movie I’ll never know. The sets were magnificent and very convincing.

Halloween 3 - Season of the Witch

Hey, I liked this movie. I guess it was poorly received when it was released, but I honestly found it to be really good. I’m surprised the dislike it gets, though I do get why it did poorly in its initial release.

Anyway, I followed the movie pretty well and actually thought it was much better than most of the 80’s horror movies out there.

Murder on the Orient Express
Hadn’t seen this in years, but enjoyed it all over again. From 1974, with an all-star cast, all of whom are quite good, including Albert Finney as the clever, diligent and meticulously-groomed Hercule Poirot.

Only Lovers Left Alive
Two ancient, jaded, world-weary vampires, one in Detroit and one in Tangier, reconnect after many years apart. A very slow-moving, almost dreamlike movie, with just the right ending following an unexpected but memorable musical interlude.

Azor
Moody, kinda creepy movie about a Swiss private banker trying to figure out what happened to his predecessor in junta-ruled Seventies Argentina. Good acting and cinematography.

The Man from U.N.C.L.E.
Fun, action-packed 2015 adaptation of the TV spy show, with a fine cast and very good Sixties sets, costumes and music. The director makes deft use of mini-flashbacks to show us what we might have earlier overlooked or what had actually been withheld from us, and the villain meets one of the most satisfying ends I’ve seen in a long time. I kinda wish this had been the start of a franchise, but that seems very unlikely now.

For some stupid reason (boredom, most likely) I thought it would be a good idea to rewatch Apocalypse Now Redux, the over-bloated director’s cut of what was a pretty poor film even after editing. Some of the worst acting ever, which goes along with the stupid story line and poor direction. Martin Sheen did his best, but it seems like the script said things like “ad lib here” for much of it. No subtlety whatsoever from anyone, especially - well - everyone.

Also watched (for the first time) Batman vs Superman: Dawn of Justice or whatever it was called. The phrase “hot mess” applies here. Also, Ben Affleck is to Batman what Jared Leto is to the Joker. If they ever make a movie with the two of them, it will be “Star Wars Holiday Special” all over again.

Affleck was best in “The Accountant” were he played a autistic savant [a perfect fit]. Another “favorite” actor is Adam Sandler in his role in “Hotel Transylvania”. [note: he was a voice actor].

A Welsh fantasy-horror movie. Honestly…not great. A little uptick near the end, but I’d definitely recommend “skip” on this one. There is something here, but they did not get it right and the movie is quite dull.

For some stupid reason (boredom, most likely) I thought it would be a good idea to rewatch Apocalypse Now Redux, the over-bloated director’s cut of what was a pretty poor film even after editing. Some of the worst acting ever, which goes along with the stupid story line and poor direction. Martin Sheen did his best, but it seems like the script said things like “ad lib here” for much of it. No subtlety whatsoever from anyone, especially - well - everyone.

Also recommended for any fan: Hearts of Darkness: A Filmmaker's Apocalypse - Wikipedia

Best line, by FFC himself: “We were in the jungle, there were too many of us, we had access to too much money, too much equipment, and little by little we went insane.”

Just finished watching Prometheus. A good sci-fi flick and a prequel to Alien, of course.

The Machinist - streams on Netflix

This is the movie Christian Bale lost a ton of weight for and it is actually a pretty good movie. I’d say it was kind of like an extended Twilight Zone episode, maybe one that was directed by David Lynch. Not an amazing movie, but pretty good one.

I can’t believe Bale went from 120 lbs all the way up to Batman weight in less than a year. Can’t be healthy.