I have one of those bodies that while isn’t all that rugged or amazing for a man, is awesome for a woman. I have a nice shoulders, good legs, and a relatively flat stomach. To this I added a black dress whose skirt was a mere three inches below my butt and was so tight I could barely squeeze a pair of socks in the padded bra I was wearing, black half-calf boots, black fishnet stockings, black nails and lipstick and a red wig. My roommate did my makeup and threw on two halloween orange/black false eyelashes. Since the party I was headed to was outdoors I decided to throw on my black business jacket and I threw around my neck a black feather boa. I was probably the hottest redhead in las vegas on Saturday night.

And apparently, all of the guys I ran into agreed.

I had a 5 o’clock shadow partially hidden by makeup, but since I was outdoors in a very poorly lit area, no one was going to notice and no one did. ABSOLUTELY NO ONE, including people who knew me, knew who I was until I started talking, and they were only a few feet away from me. I met some people and was dancing, and there’s no one around us, this girl I’d never met before walks between the three of us and looks right at me. I looked at my friends and said, “That chick just did a flyby on me!” Clearly the costume was a success. But there was more.

I went to the JW Marriot’s Cigar Club to hang out with some people from the party. Again, nobody had any idea I was a man in drag. My cousin went as an Oompa Loompa and the two of us got quite a few looks going through the casino. After hanging out for a while and getting some food and drinks my cousin and I walked back out the casino the same way we came.

As we passed one table, a bunch of guys cat called and whistled at me. Not wanting to ruin their little moment of lechery by speaking, I merely bowed my head in thanks and kept on walking out.

Some of the more quotable quotes from that night:
“You look too good Sanscour.”
“You’re exactly what I want, except I want it to be a woman.”

And the best part of the night was when I was walking to my car and I passed two guys:

“Hey.” they said to me.
“Hey.” I said back.
Guys do double take, and a combo laugh/groan/bizzaro noise.

So the moral of this story? NEVER EVER hit on, stare at, or whistle at a woman on Halloween weekend, you may be doing it to me.

Anyone else have interesting Halloween stories from this weekend besides me?

No pics??? Good God, man! Where are your manners!?

See now I thought you meant that men in drag tried to pick you up. Which has also happened to me, oddly enough.

You way is a lot more fun.

If someone wants to host them, I’ll send them SanguineSpider

And yeah, my title is misleading, my bad. But yeah it IS fun to be hit on by men while I’m in drag and watching their faces when they see I’m a guy.

I will host them. Send them to bear_nenno@excite.com

I gotta see this!

I got someone else to host my pictures, so here they are: 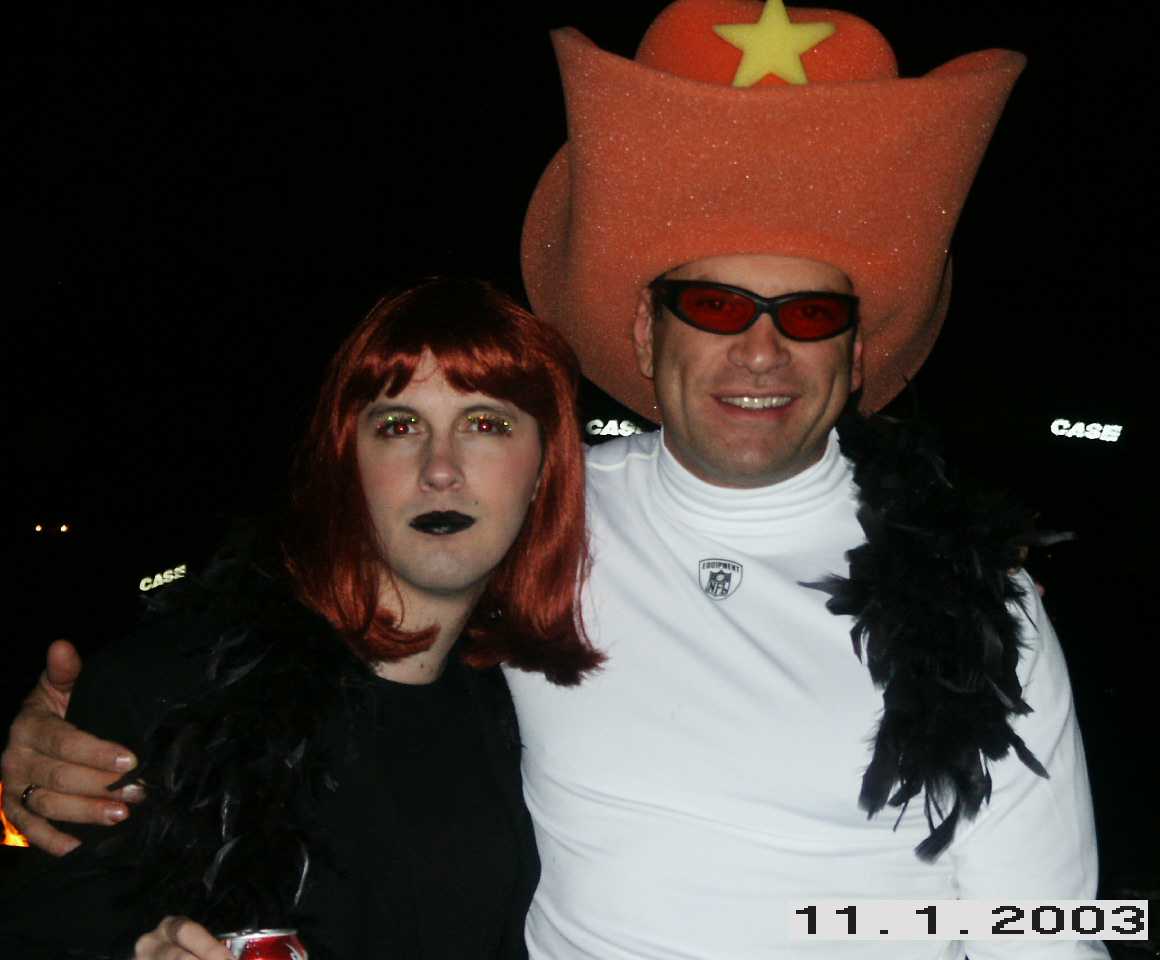 and I don’t think the pictures do me justice, but you can make your own decisions.

I got someone else to host my pictures, so here they are: 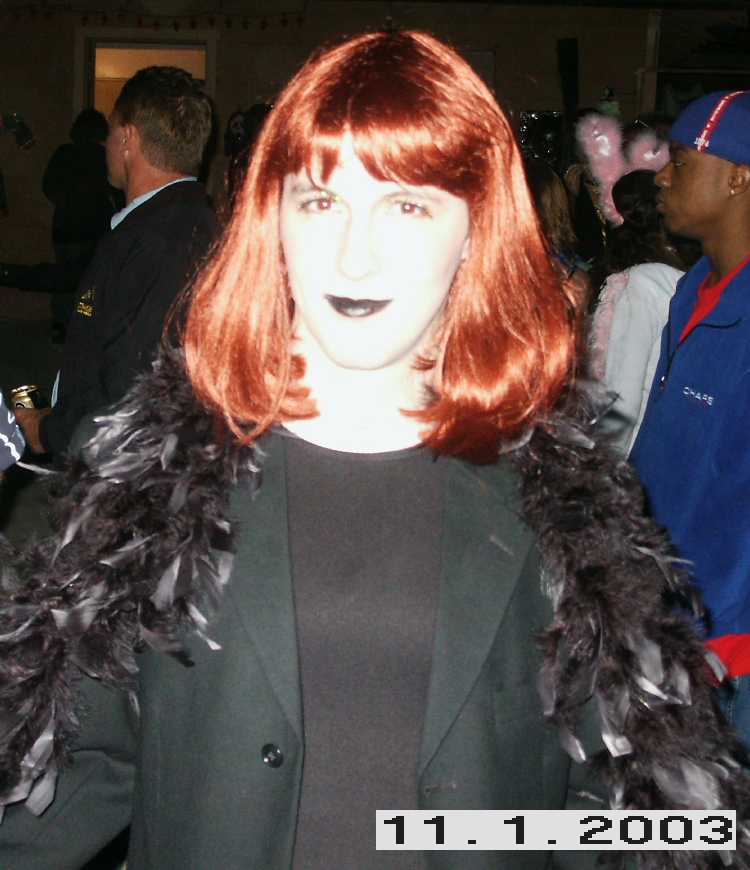 and I don’t think the pictures do me justice, but you can make your own decisions.

BWAH HA HAAA!!! Thank you, you just made my whole Monday.

And in other news, hamsters are still evil…

Hey, that second picture is decent, and definitely shows you looking more feminine (plus no 5 o’clock shadow showing through). I can imagine that combined with the outfit you described (skirt stops 3" below your butt? dang, hope you didn’t bend over), you’d be getting some looks.

I went to a drag party. I don’t think anyone would be fooled by me seeing how I didn’t shave my goatee. There were about 4 other guys who did the same. I did a black & white setup with black shoes, black & white striped tights, a black skirt, white blouse, black collar and a black wig. I did my face in white makeup going for a geisha style, but it wound up looking more like Captain Spaulding from House of 1000 Corpses.

So honey are ya straight or gay?

fans self Cause I am thinking I’d take ya in or out of that dress!

blush I’m flattered Krisfer, but I am very straight

So you make a cute chick, and now I wanna know how ya look without the make-up.

Did you stand in front of the mirror with your junk between your legs and tell youself how you would fuck yourself?

FWIW, I think you make an ugly woman.

That’s it Bruce_Daddy, you’re off my christmas card list!

You can think I was an ugly woman, but the fact of the matter is, when you’re wearing a dress as short as mine was with long shapely legs (my ex gf says I have the best legs of anyone she’s dated) and a nice squeezable ass (With a seal of approval from hetero woman AND gay men) and knowing how the mind of a man works, chances are my face wasn’t on top of the viewing list.

I do have a picture of me out of drag catsix. I can send it via email if it pleases you.

Email is in profile, and I’d be happy to send one in return.

*Originally posted by Sanscour *
**blush I’m flattered Krisfer, but I am very straight

waves hand in the air Dont let the fer put you off. I gots two boobies and I dont mean birds!

Dunno if I am in the nice looking ladies category though;)

Let’s get everything out in the open Kris, just so everyone is clear on who has what and where they put it

I am a STRAIGHT MAN

What is your declaration?

As for your looks, my email is in the profile, I can be my own judge

I is a straight woman. Well I have some bends he and there but I won’t go there!

Let me see if I can scare up a pic…