My skies are grey

Very sorry for your loss.

So sorry to hear this, it sounds like she was a loved and happy pup.

On the avatar I kept mine as our dear departed Mac, when we get a new dog I’ll probably replace, but I like the memories of that daft muppet.

My heart breaks for your loss.
Sincerest condolences.

It’s so very hard to lose a companion that never judges you and offers unconditional love. Be forewarned that you will likely lose it all over again when you pick up the ashes.

I can’t think of anything less mundane or pointless. I let my 15 yr. old schnauzer go a year ago. Still think about that good boy everyday. I have two new schnauzers and they are wonderful. Not him, not ever him, but their own pups with joy and life. I hope you an do that for yourself one day. A life without a pet is barely a life.

The downside is that most of my regulars will probably ask where Squirrel is, as she usually is waiting at the door to greet them. Some of my clients really liked her, and would bring her toys and treats. So, that’s a conversation I will probably have to have a few hundred times.

Aw geez k9b, that sounds frikking exhausting, and I’m so sorry to hear about Squirrel. Maybe you could put up a little “In Memoriam” photo of her in some prominent location that will head off some of the cheery queries? Very rough to have to be breaking that bad news directly over and over again.

Be forewarned that you will likely lose it all over again when you pick up the ashes.

You were right about that. When I left her Sunday, I needed a few minutes in the parking lot before I could drive.

When I picked her up last night, and put her in the back seat where she usually rode on our car rides, I had to pull over a few times on the way home.

It’s hard not to. There was very little of my life that she wasn’t a part of. She laid at my feet, or up on my couch while I watched TV. At work, she was always right next to me. Every night before I went to bed, I’d go down to the couch that she had long claimed as her own and tuck her in, and every morning, give her some pets before I started getting ready for work. Going downstairs and not seeing her looking at me expectantly from the couch is tough. Not calling out, “Time to go to work, Squirrel!” as I’m heading out the door breaks my heart.

I don’t let her jump out of the car, not since we had a scare about her ACL tendon many years ago, so we had a routine where I’d lift her out, now whenever I go somewhere, I still want to go to the backdoor and open it for her to come into my arms. I can’t shake that I’m forgetting something when I don’t.

I take my dogs out to the greenspace out back several times every day, and now with just the one, it’s tough. There are quite a number of dogs that get walked in that greenspace, and she would spend a fair amount of time sniffing around, checking it all out. She would always make me chase her around as she dropped a triple deuce in various locations, annoying as that was, I miss it. I think that’s when my little one most notices her absence, as he would run around her while she was doing her business. He looks around, as if trying to see where she is so he can go bother her.

I hope you an do that for yourself one day. A life without a pet is barely a life.

I definitely will. I’m not sure how long I should wait. One of the things that I told her was that when she woke up, she’d be a puppy again, and that I’d come and find her. I don’t know how seriously I take that, but I somewhat feel the need to at least try to follow through on my promise.

I don’t know exactly what she was. I kinda think that she was a mix between an Australian Shepherd and a Bernese Mountain Dog, based on my relatively extensive observation of many different breeds, but it’s still just a guess. I’m not sure if I want to try to find the same mix, but I definitely do want something similar. I do love the double coat, where you can just snuggle into her soft fur. I’ll admit that if I did not have bathing and grooming facilities at my disposal, I may feel differently, as before I was able to give her a professional bath, she was actually pretty nasty most of the time, and was a terrible shedder.

I named Squirrel before I met her, I just knew that I wanted a dog named Squirrel. My little guy is Mouse, or Mr. Mouse if you are being formal. I think I’ve already picked out Bunny as the name for my next dog.

Maybe you could put up a little “In Memoriam” photo of her in some prominent location that will head off some of the cheery queries? Very rough to have to be breaking that bad news directly over and over again.

My friend’s mother actually put a sign on the door about it. Not sure that it helps. Some people aren’t very good at reading, and don’t even notice it. The ones that do still want to offer their condolences.

And to be fair, they miss her too. Many of my clients have been coming every 3-4 weeks for years. They knew her pretty well, so they have their own sense of loss of knowing that she won’t be there to greet them. There are a couple that I almost feel like reaching out to now, or at least sometime before their appointment, so that they don’t bring toys or treats with the expectation of giving them to her.

Took me a bit to work up to it, but here’s some photos of my girl. 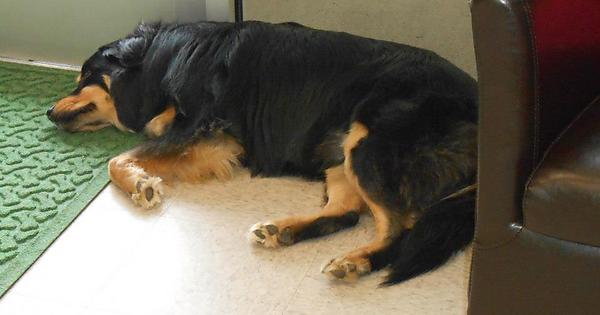 And a couple of my little Mr. Mouse 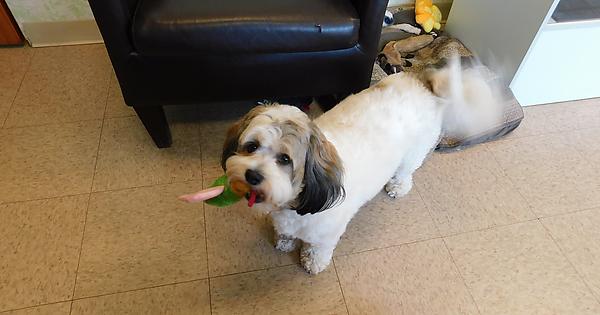 She was (and he is) just beautiful.

this has been a mundane pointless thing

This is absolutely not a pointless thing; and only mundane in the sense that it’s an unavoidable part of life.

I am very sorry for your loss. And yes: she seems to have been ready to go, or as you say to have gone already.

I just saw this today. I’m so sorry for your loss. RIP, Squirrel Girl.

Mouse’s blurred tail is so adorable in that picture. Made me smile.

Squirrel girl is a beauty-more mountain than Aussie but such a beauty.

My condolences. It’s hard to lose a companion. All the best!

That was one of the most moving posts I’ve ever read here. I need to step out and bawl a minute for Squirrel Girl and all the good lost dogs.

Seconded! I am so sorry for your loss.

This is absolutely not a pointless thing; and only mundane in the sense that it’s an unavoidable part of life.

Amen. As the description says, For general discussion: from frivolous chatter to deep thoughts; from harmless diversions to life-changing announcements. Dogs are wonderful companions but then you’re always saying good-bye.

It’s the sucky part of being a steward.

Dr. Jeff (on Animal Planet) says (not an exact quote) - all we can do is love them while we have them.

They leave such a disproportionately large hole in our lives when they go, don’t they.