Need some help with the chord changes in this J Denver tune.

I can’t decide if the chords in this song are pushed. It’s a common technique in many pop songs where the chord change is on the 4+ beat instead of the 1.

I can usually tell easily by the bass notes.

The bass is a G note. Root of the G chord. The bass doesn’t change to a C until the next measure.

but that E note that comes early is part of the C chord. Should I change the chord on the 4+(push)?

Then the next measure, there’s a tied B note. That’s the 3rd of the G chord. The bass changes from C to D on beat 4. The 3rd & 5th of the G chord are early. But the Root doesn’t change until beat 1. Is G pushed?

Same below there’s a tied A note going from C to D chord. But the bass stays on C.

This is bugging me. It’s a simple song. G,C,D should I just follow the chord symbols and change on beat 1? I’m not sure how to strum this song.

Most of the time it’s very clear in the bass what’s happening.

here’s one page of the music. 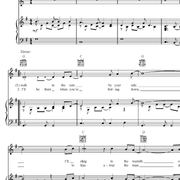 I assume you do as indicated and start the word early on the 4+? Hold the note across the measure?

It seems strange that so many words span measures in this song. I’ve seen it happen once in awhile in a song. Usually it’s a long note held more than 4 beats and it goes into the next measure.

Usually songwriters fit the lyrics neatly into the measures. That’s not the case here.

I’m going to strum it straight. One chord per bar. Follow the root notes of the chords. That’s usually a safe choice.

I gotta get it ready for a buddies birthday party. I’m singing six J. Denver tunes and several CSNY hits.

I normally would have brought this question to my music teacher. That school is closed during the pandemic.

I’m probably late to the party, but there’s a D7 chord on “by [your side].” plus, the whole song is transcribed at twice the speed of every version of sheet music I have of this song.

I noticed the tempo was wrong. 146 makes no sense compared to the recording.

John’s chords aren’t set in stone. He wrote Leaving on a Jet Plane very early in his career. Peter Paul & Mary had a hit with it. They added a minor chord, Em IIRC. John’s recording doesn’t include it.

Not a big deal. Both versions sound great and the typical radio listener never noticed. I learned about it playing with friends. Some had learned the PPM version and others John’s. We had to decide how to play it as a group.

Yeah, play the chords on the beat. Otherwise it’s sound like calypso or Daft Punk.