My completely unbiased suggestion is to name your cat, Tibby.”

It’s listed here as the 41st best name for a grey, male cat.

I’ve had a cat named Tibby for 65 years. Not the same cat, mind you.

It’s the purrfect name for any cool cat.

I see that it is a totally unbiased suggestion.

P.K. is through surgery. He did well.

Very good to see that!

I really hope it makes him scared to go outside, but it probably won’t.

I first want to say I’m glad he looks to recover from this Cat-snafu. But then I want to complain because I also have house cats that think they are escape daredevils, and have been extra paranoid about them after your experience. And my wife wanted to express her happiness that you have the available vets with the right skills as well as the financial wherewithal to take such good care of said feline adventurer.

Now excuse me, I must go lure the cats back out of the garage where they have gone into hiding just to raise my blood pressure.

And my wife wanted to express her happiness that you have the available vets with the right skills as well as the financial wherewithal to take such good care of said feline adventurer.

We have pet insurance with coverage for accidents and illnesses. I don’t want to have to choose to put down a pet for financial reasons, if I can help it, so I pay around $25/month to avoid that.

That way I can make the decision based much more on just what is right for the pet.

Jus got word they think he should stay until tomorrow morning. Doing well though.

The cat here is referred by me as “Cat” or “Kitty-Kitty”.

She responds, which makes me wonder if she is a native English Speaker or somehow learned on her own…

The cat that’s in the shop for repairs is originally from Mexico. When he doesn’t understand what we’re saying, we say it’s because we aren’t speaking Spanish.

There was a cat my neighbors had back in the 80s who had either suicidal tendencies or simply liked to live dangerously (jumping out of windows in the fifth floor and such) so they ended calling her Kami. Because she was a real Kami Katze (Katze is the German word for cat). She lived quite a long life, when I moved house and lost contact she must have been 12 or 13 years old. She was crazy but nice, she often came over the roof to my balcony.

Frogger (from the multiple cars escapes).

Cravat (he seems to have one one around his neck.

Hijacking y own thread a bit, but here’s P.K., back home, looking pitiful. 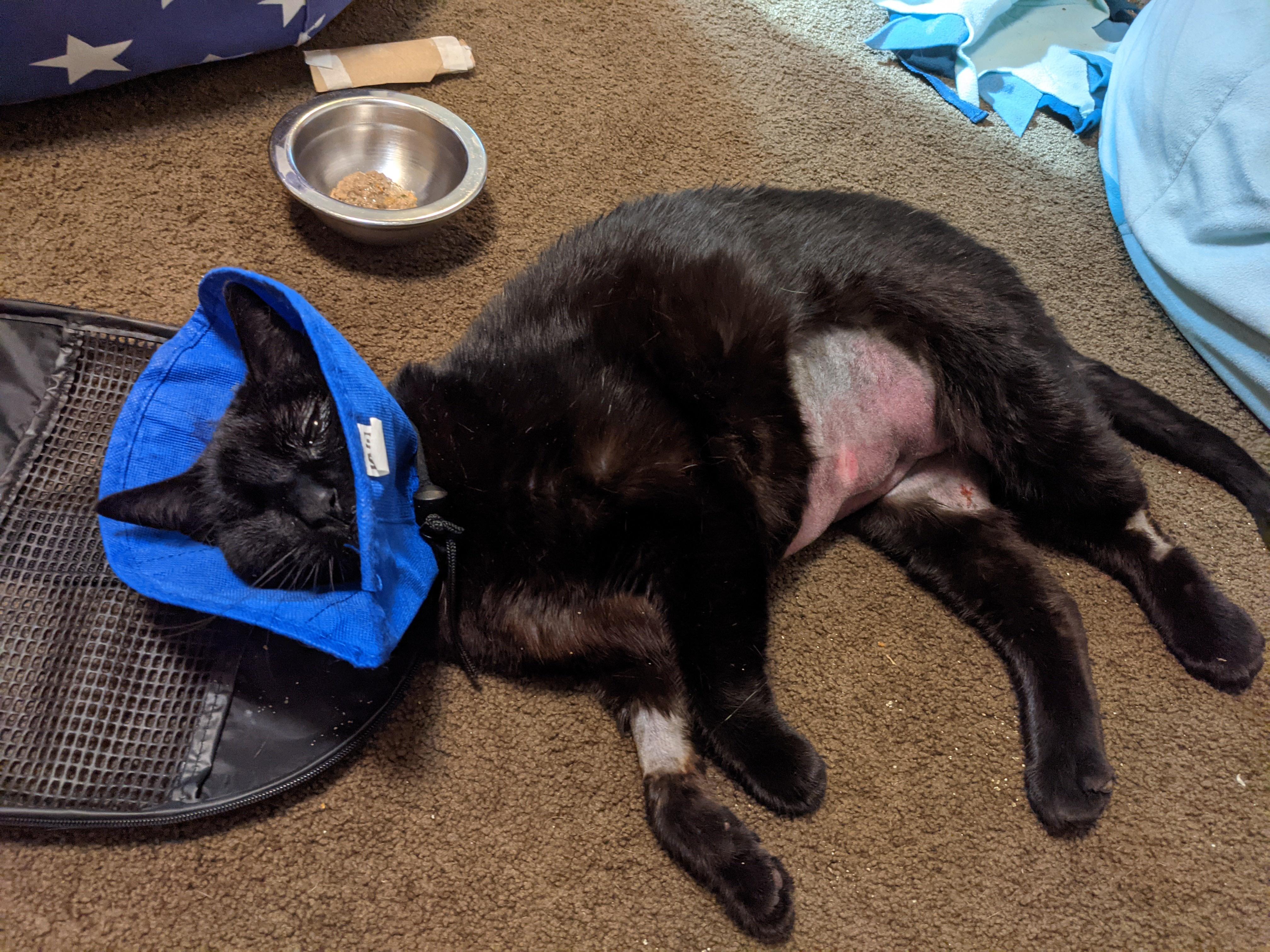 He’s on pain meds, antibiotics, and some anti-inflammatory meds that also help keep him a little more sedated. He seems sleepy but like he’s doing good. He was able to use the cat box. Hasn’t eaten, though.

For a cat who’s recently been through so much, I’d say he looks great! Thanks for sharing a photo – P.K. has been much in my thoughts over the past few days. I’m thrilled to learn he’s doing so well!

I’m afraid I backslid on Shadow’s name. I can’t stop calling him Goblin, so Goblin he shall be. He is very much P.K.'s doppelgänger.

He now eats just a couple feet from my mostly inert presence. But as soon as he’s done, he flies off after finding a hair-trigger excuse to be nervous. While he’s eating, I can sip coffee, talk to him, scratch an itch on my nose or even move my feet. But as soon as he’s not distracted by food, he becomes instantly wary. I almost named him Napoleon, after Napoleon Dynamite. Goblin’s behavior always makes me think of Napoleon at the end when he realizes the music has stopped and he flees the presence of the audience.

Overall, we’re making headway. He hangs around on the patio most days, watching to see when I’m in the kitchen (and hopefully preparing more food for him). He doesn’t run nearly as far away now when I open the door to put the food dish down.

I’ll bet he’s never had a human hand anywhere near him. I won’t rush.

Poor P. K.! he surely does look pitiful; but he’s HOME. And alive, and going to stay that way.

I’ll bet he’s never had a human hand anywhere near him. I won’t rush.

Slow but steady’s surely the way to go with Goblin. (Which seems like it’s the name he wants; so that’s also the way to go.) And you do indeed seem to be making quite a bit of headway.

He’s more and more himself. He’s now on the mattress with the two quarantining people downstairs, sleeping on my partner’s legs.

I’m afraid I backslid on Shadow’s name. I can’t stop calling him Goblin, so Goblin he shall be. He is very much P.K.'s doppelgänger.

I agree with thorny_locust that Goblin must be his name.

It’s awesome how much progress you’ve made.

I recommend this toy for any cat – all of mine have been crazy about it – and I’ve heard it can be especially good for skittish cats. Just play for a while, and then put it away. They get more and more used to you, your movement, and that you bring something fun, while it’s at a little distance, which helps.

I really recommend this specific one, which spins and makes a slight noise as it goes through the air. It seems to really activate their prey drive. Mine have all made huge leaps for it.

I think you and Goblin are on a great path together.

Ollie is turning out to be a little less cuddly than we thought. But we know he’s still adjusting, too.

So, I’m worried because P.K. is not eating. I think the meds are making him nauseated, which they wouldn’t if he would eat with them. I’ll have to call the vet to see what they recommend. I even tried some bonito flakes to get him started, and he seemed interested but then turned his head away.

If you can’t get the vet. right away, you might try getting water into him with an eyedropper.

My partner called the vet. They seemed unsurprised that he isn’t eating yet. He got lots of fluids, but I’ll check to make sure he isn’t dehydrated. We can bring him in for a recheck if he doesn’t start eating soon.

On the other front, progress: 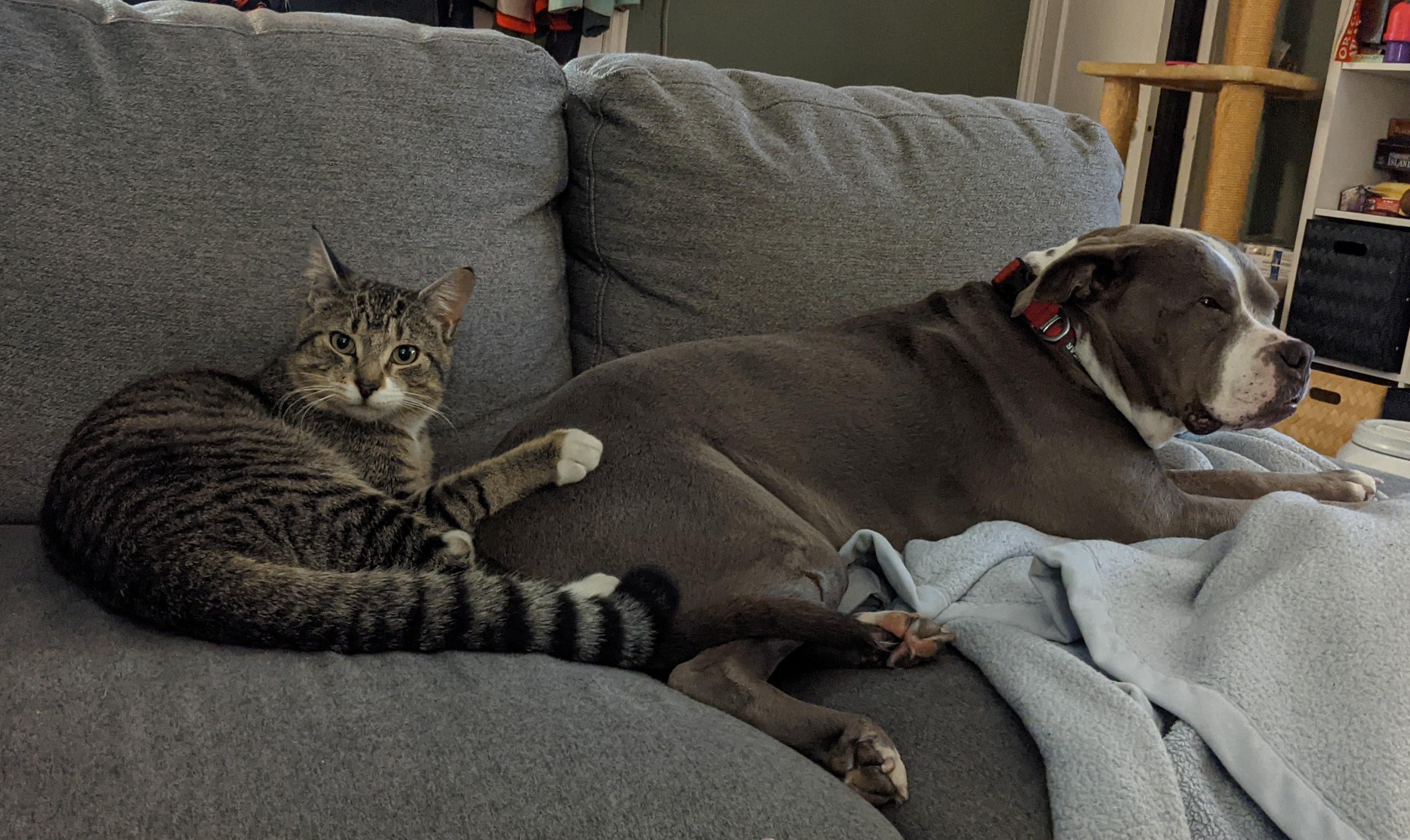 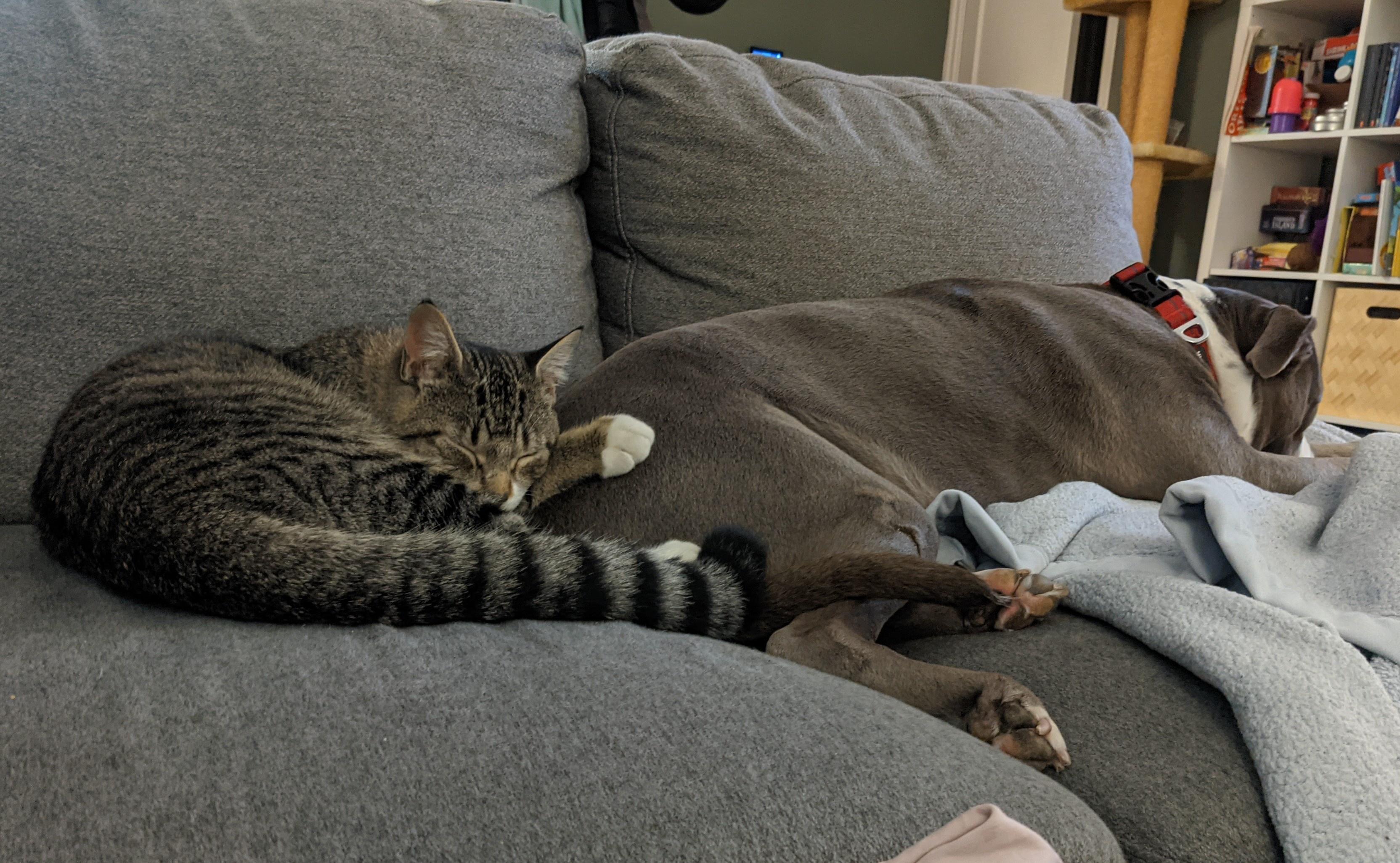 Ah. Yes, if he’s taking fluids that’s a lot less urgent; and if the vet’s OK with it that’s encouraging.

And your newest has discovered that dogs make good pillows! Excellent!

Ollie accidentally got into the room P.K. is in. He didn’t notice him at first, just was sniffing the beanbag impression. 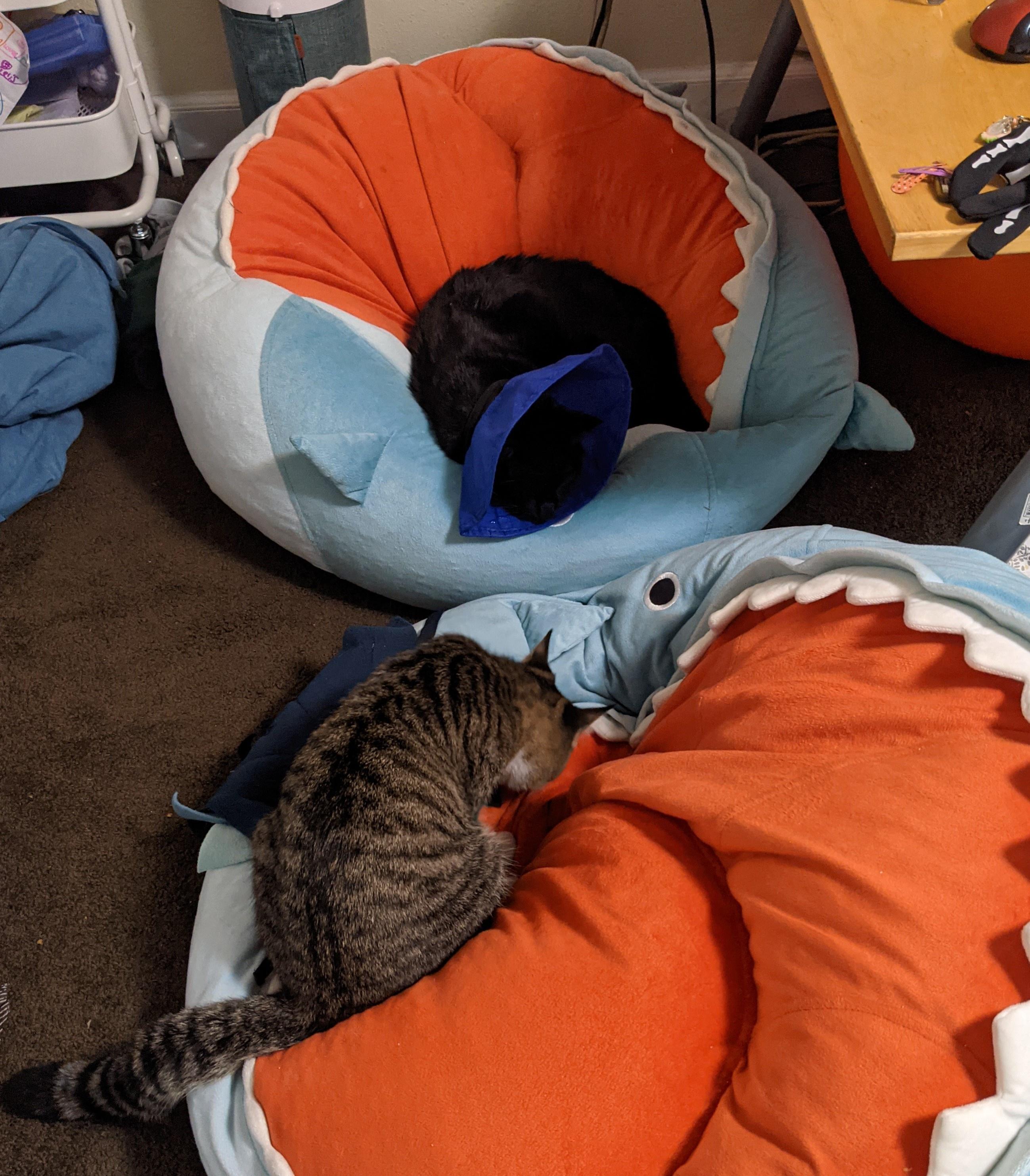 After I snapped the photo, P.K. moved his head and Ollie noticed him. He froze, then slowly backed away, making sure to subtly turn himself sideways as he withdrew, but no big display. No growling by either kitty. Ollie’s tail puffed vet slightly.

I have a feeling Ollie would be grooming P.K. (which he needs) if they were together. But he’d also be able to reach P.K.'s staples, so I guess it’ll have to wait the 2 weeks for stitches to come out for them to fully meet and hang out.

We have Covid in my house – details are in the coronavirus chitchat thread – so we are further dividing up the house, and I’m trying to reckon how much risk there is in letting cats and dogs roam between zones. Ollie is next to me on my bed, rolled upside down, dead to the world. It helps to have a cat nearby.