We seem to be adopting a stray kitty we wound up with.

A houseless person saw him almost get hit by a car a couple of times, so she got him confined in a dog crate and put the word out, asking for help. My partner volunteered to take him to the Humane Society to check for a microchip. We chatted about what we’d do if he wasn’t chipped, but she apparently thought chipping was a lot more common than it is…

Anyway, he isn’t chipped. He’s about a year old, intact, and a total sweetie pie. From the description we had, I had thought he might be feral, but that’s the furthest thing from the truth. Like our cat P.K., this guy seems sweet and “bombproof.” Doesn’t blink an eye at two 8-year-olds yelling and flinging themselves about, as they do.

Those same 8-year-olds have been lobbying hard, and I think we’ve decided to keep him.

I was very worried about FIV, for which there’s no vaccine, so we got him tested, plus all his vaccines on Saturday. Got word he’s FeLV and FIV negative yesterday, so breathing easier. The first time to get him in for exam and neutering at our vet is late December, so we’re going to have to try to find a place that can neuter him sooner. He’s still very kittenish, not a tom cat, and we don’t want that to change. 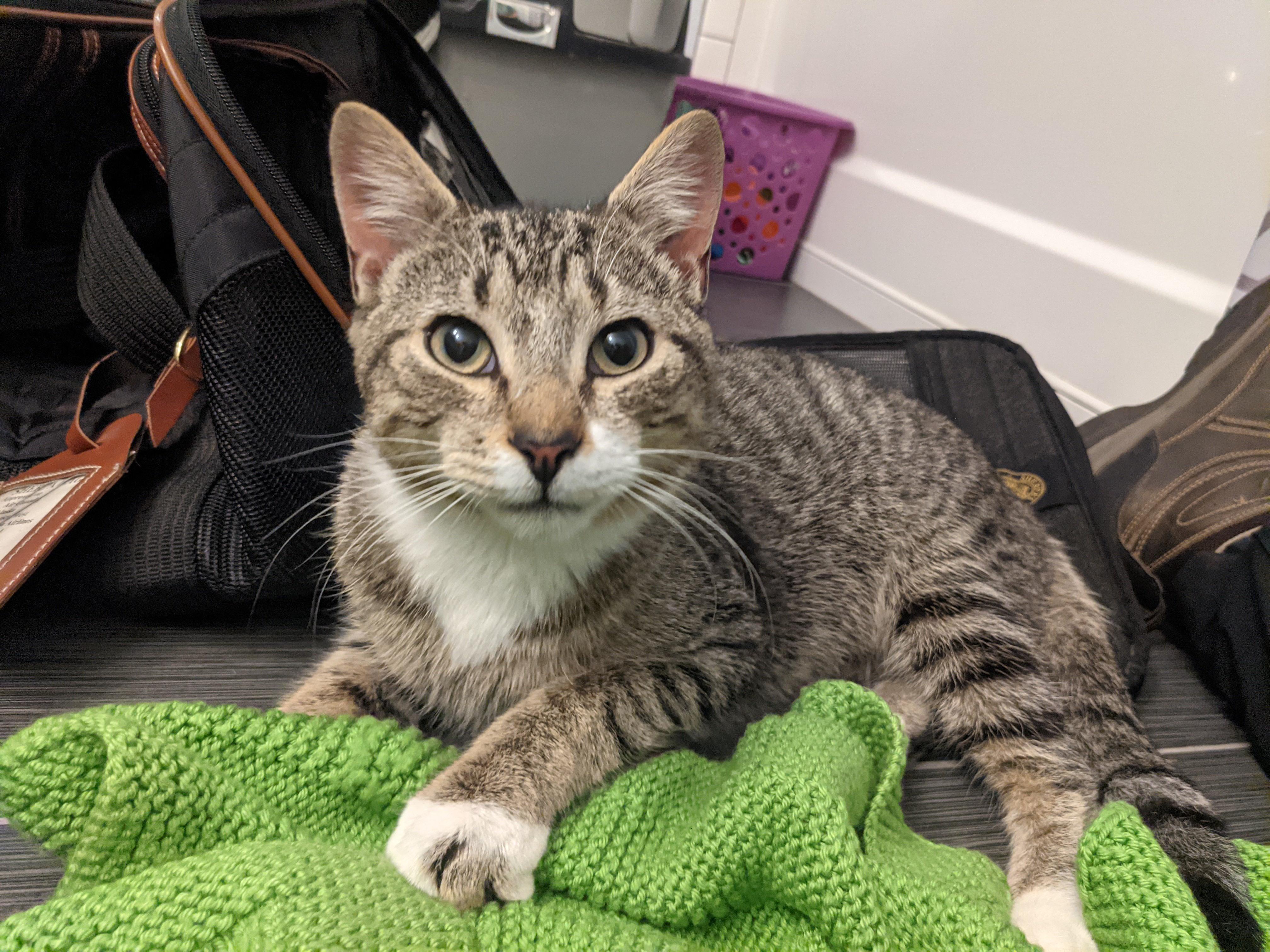 So, now he needs a name. We’ve temporarily called him “Stripes,” but I don’t think that is his real name. His siblings are P.K., short for Pirate Kitty because he has one eye, and Gracie the wonder dog. 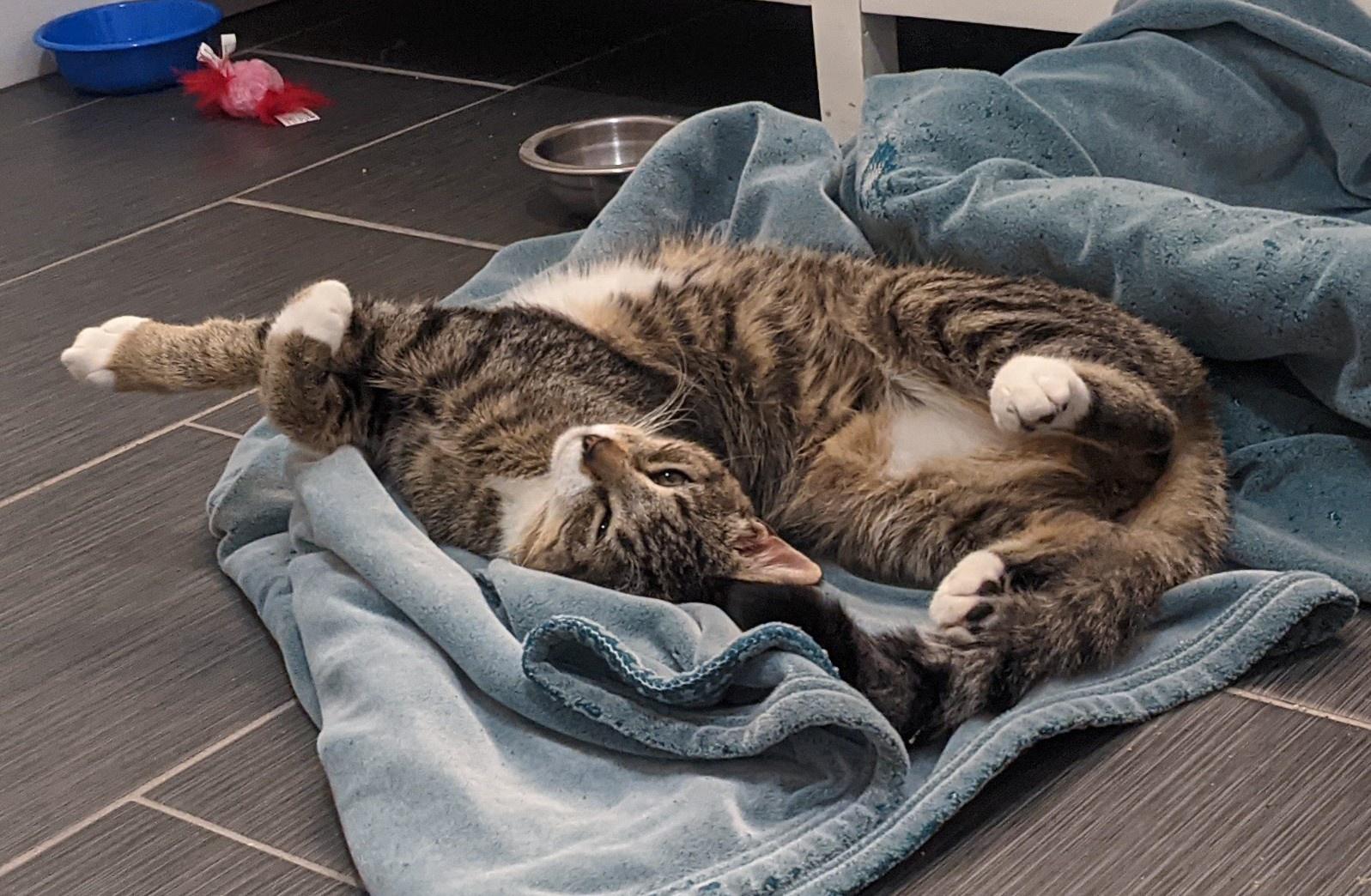 From the picture, I’d name him Pretzel.

Tripler
That cat would look good in a Fedora.

I don’t know what his name is – I’d probably have to get to know him in person to figure that out – but congratulations, both to him and to you, on this expansion of your family.

And he is gorgeous. And yes, very definitely not feral – no feral cat would be that relaxed shut in a house with a human close enough to take pictures.

Yeah, we were worried about him being feral or very skittish based on some things the person who caught him had said. She said he sometimes was doing a growly or “aggressive” meow when she was near the crate, and we just didn’t know what that might mean before we met him.

Now that we know him, there’s not a trace of “feral” about him. He does have an odd assortment of meows, though, one of which does sound a little like a “fight” sort of meow, but that’s not what he’s using it for. Otherwise his meows are very kittenish.

It’s difficult to tell what cat sounds mean unless you know the specific cat. One of my current crew growls to express minor annoyance; you can carry her while she’s growling at you (she doesn’t like to be picked up), but she doesn’t bite or scratch. From most cats a growl is a warning of imminent mayhem if whatever they’re growling about doesn’t stop; but not from her.

There are some I’m not remembering. I tend to like human type names. I think food names for pets can be super cute, but I’ve always wound up going for a (usually “nerdy”) human name in the end.

I’m currently trying out Ollie, which I think rolls off the tongue in the phrase “P.K. and Ollie.” And I think it suits him. But mine is not the only vote.

Out of that selection? Pippin. He looks very like a Pippin to me.

If he were mine I’d name him Sammy.

Why? Look at him! He is Sammy.

Two questions~Is he chipped now (or will he be after you know he is yours for good)?

Will you be able to find his benefactor street person and let them know he has found a safe forever home one way or another? Maybe take them a photo of him in his new family home they can keep? Seems like that would be a real kindness that might be very meaningful.

BTW, he is very, very charming and adorable!

Yes, assuming he doesn’t get claimed by his prior owners, we’ll get him chipped when he gets neutered. I will always do so with my pets.

My partner is in touch with the houseless person. We let her know when we picked him up that we would take responsibility for him. We told her when we found out he wasn’t chipped. She was worried about what would happen to him, and we let her know we would keep him safe. I don’t think my partner has told her yet that we now intend to keep him, but it also isn’t official until all pets can meet and approve. I agree we should send her a nice picture when it’s reasonably official.

The vet says to keep the old and new kitties apart a full 7 days, so it can’t be official until next weekend at the earliest.

I am well known in my family for being able to pick the perfect name for a pet. My brother even delayed naming his two most recent dogs until he could consult with me. That said, that’s a Bandit if I ever saw one.

Though I used to have 2 cats that looked just like him, and their names were Samson and Dewey, and seemed to fit them perfectly.

The vet says to keep the old and new kitties apart a full 7 days, so it can’t be official until next weekend at the earliest.

You know, I presume, that approval might not be immediate, and that hissing and snarling at first introduction doesn’t necessarily mean long term problems?

Can they smell and hear each other, in the meantime?

I agree we should send her a nice picture when it’s reasonably official.

Yep, I’ve done it before.

We initially had two doors between him and the other pets, because of the FIV concern. PK still managed to get downstairs a couple of times, and he was just casually sniffing around outside the bathroom door. New guy was meowing one of those times. No hissing or growling.

Gracie the wonder dog through poor planning on our part, got to sniff the carrier while he was in it, as he came in. No strong reactions on either side.

Oh, and I can’t believe I left this out. The person who caught him gave him 3 cans of cat food because he was so hungry. The unfamiliar food caused some very serious stomach upset – all liquid poo, with some frequency. When I took him to the vet for shots, on the way home, he couldn’t hold it, and pooped in the carrier, poor guy. When I got home, I pulled him out of the carrier and just carried him straight downstairs and gave him a very necessary quick bath in the sink.

The dog got a good sniff at him as we went through the house then, too. And while he most definitely wanted not to be in a sink full of water, I came out of the experience with all skin intact.

Anyway, we’re now letting the new guy into an additional room, and we plan to close him back up and let PK in that room after a while to let him smell it.