Week 3 is here. We’re starting to learn a bit more about these teams, but there are still a ton of questions. Is Tua really a 6 td guy, or was that a fluky game (both) What the fuck is wrong with Kyle Pitts (Arthur Smith is an idiot)? Why does Cincinnati’s offensive line hate Joe Burrow so much (he’s on pace for 100 sacks this season)? Is it a quarter of a billion dollar Russell Wilson or rookie coach Nathaniel Hackett who needs to change it up to get the offense going in Denver (Russ ain’t helping). And why do I have so many questions.

Mike Evans gets suspended one game for going after Marshon Lattimore to fight. (For my favorite, watch Andre Johnson landing haymakers to Asshole Extraordinaire Courtland Finnegan. Jalen Hurts actually impressed me passing the ball this weekend. And, my favorite thing of this week, Eli Manning goes undercover as a walk-on QB for the Penn State Nittany Lions. Great work.

Some … football … games this weekend. Let’s take a look:

To be honest, maybe I’ll take a break this week. I’m not seeing a lot of interesting games. For Thursday, while I enjoy watching Mitchell Trubisky look lost after his first read, it’s gotten a bit boring for my taste. Boring like watching Najee Harris get less than 4 ypc. Although I’ll be rooting against the Browns, I don’t have a lot of interest in watching the game. Although that Nick Chubb is fun to watch run, and Myles Garrett is a bad man.

Of the early Sunday games, I’d might check out the Lions/Vikings just to see if either team is for real. The Bills/Dolphins game might be worth a check in, just to see if the Dolphins have taken the next step. Of the late games, of course the Packers/Bucs should be interesting, but not what I had hoped. Neither team is at full strength, neither team is playing all that well, and Rodgers v. Brady has lost some of its appeal. Still, it could be a fantastic game, we will see.

Sunday night, to me, is more interesting as both the Niners and the Broncos have high hopes for the season, but neither has shown much. Trey Lance’s ankle injury is the best thing that could have happened for Kyle Shannahan. It might just have saved him from flushing a Super Bowl contending roster down the tubes to chase his hubris. And I haven’t seen the Broncos as they (and I) try to figure out what exactly is going on. I’ve always like Russell Wilson (Wisconsin player, seems to be an aww shucks kinda lovable goofball), but I’m wondering if his ego/desire to be the focal point of everything is costing the Broncos. Hopefully we’ll know more on Monday

So, let’s hear from you. Which players have you confused (is Amon St. Brown really, really good?) . What have you figured out that nobody is talking about (Lamar Jackson is going to break the bank) Where’s you money being invested this week (I really like the Eagles to just crush the Commanders)? Share!

Cowboys/Giants is to the NFL what Yankees/Red Sox is to MLB. It reliably draws eyeballs, even if both teams stink, and so, that matchup gets way more national coverage than it should.

Which players have you confused (is Amon St. Brown really, really good?) .

Geno Smith has been a hell of a lot better than I (or probably anyone not named Pete Carroll) expected, but he’s not the Seahawks’ biggest problem. They can’t get the run game going and so much of their team is young and makes newbie mistakes. So is Geno actually a legit (if mediocre) starter, or is this him playing at his peak? (Like Nick Foles in a Super Bowl.)

His Intended Air Yards have been 5.2 (his target is only 5.2 yards from the line of scrimmage), the lowest of any QB in the NFL. His aggressiveness % (Aggressiveness tracks the amount of passing attempts a quarterback makes that are into tight coverage, where there is a defender within 1 yard or less of the receiver at the time of completion or incompletion.) is 6.9, the third lowest in the NFL (Justin Fields hasn’t thrown a single one yet). He’s making easy, quick throws to open receivers, and rarely challenging downfield or into coverage. It’s perfectly fine for a backup QB, and it can work (hell, Matthew Stafford has a lower aggressiveness %), but it’s not ideal.

They can’t get the run game going and so much of their team is young and makes newbie mistakes. So is Geno actually a legit (if mediocre) starter, or is this him playing at his peak? (Like Nick Foles in a Super Bowl.)

Yeah, what is up with that? Reshaad Penny was outstanding at the end of last year, and now he barely gets the ball. I really have no clue what Pete Carroll is thinking.

Why does Cincinnati’s offensive line hate Joe Burrow so much (he’s on pace for 100 sacks this season)?

I’ve been told that O-lines take a while to learn to “communicate” and the only way to really do that is in a real game. Having never played professional football, I have to take their word for it, but I believe it. Individually, everyone they signed is an upgrade over whoever they replaced, on paper.

Seems like more within conference games this week. The marquee matchup is Green Bay - Tampa (Aaron Rodgers versus Tom Brady!)

Bills - Dolphins is another one to watch - a battle of 2-0 teams.

I am not optimistic about the Commanders beating the Eagles.

Hoping for a Ravens win!

Yeah, what is up with that? Reshaad Penny was outstanding at the end of last year, and now he barely gets the ball. I really have no clue what Pete Carroll is thinking.

I don’t know either. Here is an article about how perplexing this is. 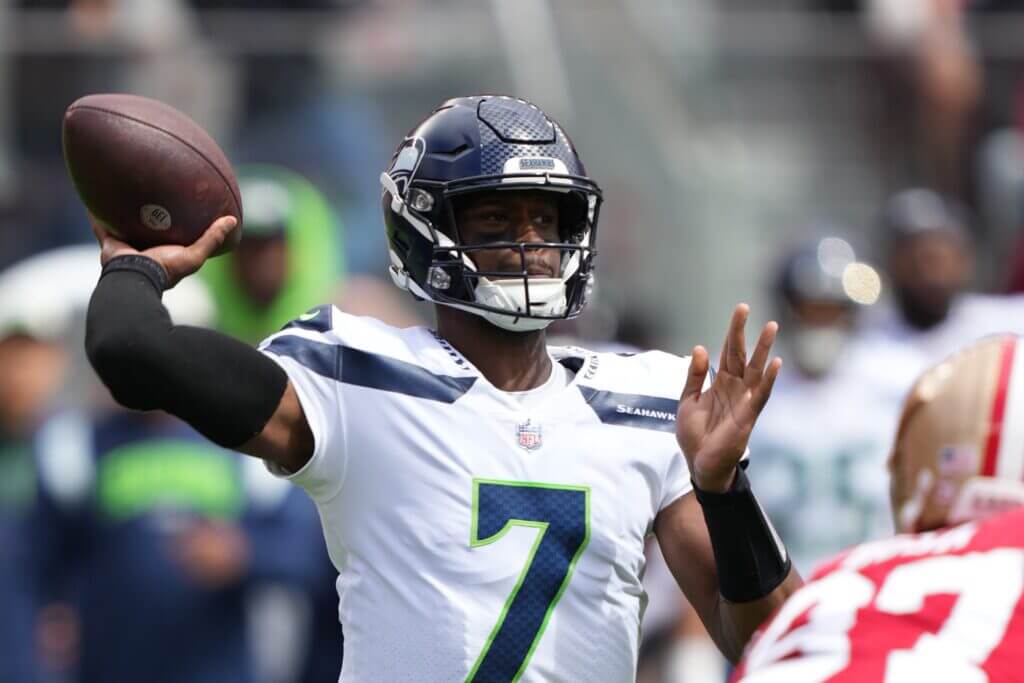 "We need to trust him and maybe give him more opportunities," Carroll said of Geno Smith. What might that mean for the offense?

“After two weeks of watching Geno play, we don’t need to hold him back at all,” Carroll said Monday after Seattle’s 27-7 loss to the 49ers on Sunday. “Geno has got his game ready to go. We need to trust him and maybe give him more opportunities and stuff. We’ve been pretty solidly conservative, counting on running the football.”

“When we didn’t run the football, we didn’t have as much of a mix that we needed. We can do better with that. Whether that’s right or wrong, that’s not the point. The point is we need to keep expanding. We have too many explosive avenues to go to, and we’ve got to make sure these guys show up.”

But as the article points out…

The numbers don’t necessarily suggest that Seattle has been “counting on the run game.” Seattle, at the time of Carroll’s comment, ranked last in total offensive plays run with just 96. The league average is 118.7. The Seahawks rank last in rushing attempts per game and 30th in yards per carry. They’re 12th in early-down passing rate in neutral situations, according to RBSDM.com. On paper, Seattle has relied on its passing game when adjusting for time and score.

They have a first-round pick at starting RB who played like a first rounder toward the end of last year. They drafted another RB who looks to have the potential to be great (Kenneth Walker). Their starting QB wasn’t good enough for the Jets. This would be the year to lean on the run game.

I really have no clue what Pete Carroll is thinking.

He’s thinking that he should have let Marshawn run the ball.

That was Bevell’s fault!!!

(The prevailing belief in Seahawk fandom.)

My Colts should have been 2-0, but for some reason we can’t even beat the Texans and Jaguars… and the Chiefs are going to cream us, to drop us to 0-2-1.

I am very cautiously slightly optimistic about the Lions. The Offense had been clicking so far, and Goff and St.Brown look to have developed good chemistry over the off season. And Swift looks like the big play threat out of the backfield all good Offenses have these days.

The D might be good enough to slow things for the O to outscore enough times for a 8-8 season, maybe?

The Bills are the only team I see as no Fuckin’ chance, which is remarkable. The out-of-conference, even the Pats now, are beatable. I’ll go 9-8.

Boy this game is a shit show so far, huh? I keep leaving to do things during commercial breaks and then when I come back they’re punting. Or missing a field goal.

EDIT: Yay, a first down!

browns just scored …that FG from pitt might hurt a lot tonight… there’s no closed captioning?

Wow. That catch by Pickens was amazing.

Holy shit, that’s the worst result of a great busted play I ever saw. Loss of down! Ouch.

He’s going to have a hard time living that down when they’re watching film. Taking yourself out of bounds during your route. Bless your heart.

Absolutely despise the announcers using down time to try and whitewash the Deshaun Watson signing. As if it’s somehow impressive that Watson has to get “treatment” when the fucker repeatedly asserts that he did nothing wrong. Ugh. Al Michaels should feel dirty.