Put it all together, and we’re looking at around 10^-8 farad.

Which is enough to…do what? Zap a bug? Give someone a tingle? Kill someone? Shoot a visible arc from the Ark across a 50m gap? Not even be noticeable to someone in prolonged direct contact?

Not even Chuck Jones understood what was going on. 'Mynah Bird shows up…walks a bit…exits"

Which is enough to…do what? Zap a bug? Give someone a tingle? Kill someone? Shoot a visible arc from the Ark across a 50m gap? Not even be noticeable to someone in prolonged direct contact?

By the standards of the little things you’ll find soldered to your computer motherboard, 10^-8 F is pretty respectable-- A typical capacitance for one of those is around 50 pF (a couple hundred times less than the Ark). But on the other hand, nowadays you can buy a 10 F capacitor (i.e., a billion times more than the Ark) that’ll fit in the palm of your hand, and we trust high schoolers to do experiments with them. 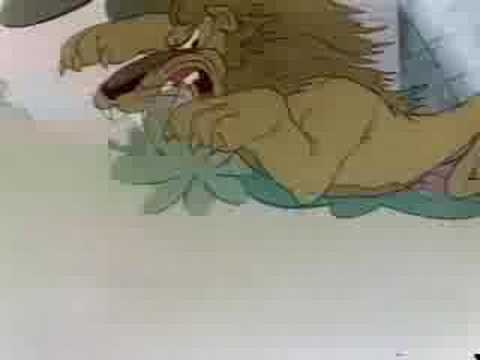 Warner has done much worse. I like Inki. Out of all the black, native, Asian stereotypes, I PERSONALLY think the aborigine is the least of the bunch, and then there’s Inki then everyone else.

But I’m sure I’m in the minority on the dude with the boomerang who fights Bugs. I think that one may actually be one of the Censored 11…let me look it up.,nope. In fact the Wikiarticle says nothing about it so i guess theres no controversy

Bushy Hare is a 1950 Warner Bros. Looney Tunes cartoon directed by Robert McKimson. The short was released on November 18, 1950, and stars Bugs Bunny. Bugs winds up in the Australian Outback, where he is switched with a baby kangaroo and has to deal with an aborigine hunter. The title is a play on "bushy hair" along with aborigines stereotypically being from "the bush" country. The baby kangaroo is played by Hippety Hopper, in a cameo appearance. This is the only cartoon in which Hippety Hopper...

Having lived in Bangkok during the entire run of the US version of The Office (but I watched and enjoyed the British version on DVD while there), I did not see it until returning here a few years ago. And I only recently came to realize that Creed Bratton was playing himself. I had never heard of him before but now know he has for a long time been a remarkably successful character actor, singer and musician. Apparently the joke is that he, Creed Bratton, took this job at Dunder Mifflin to lay low from his wild and crazy past. I thought it odd that the character’s name and the actor’s name were one and the same.

Oh, Creed’s story is even more complex… yes, Creed Bratton played guitar for the Grass Roots (here’s a good shot of him solo’ing during " Let’s Live For Today"… and acting a bit cynical/goofy/Creed-From-The-Office-y).

But Dunder Mifflin Creed also let slip that he’d manufactured his identity, and later said something like:

And the best thing I ever did was to steal Creed Bratton’s identity.

In another episode, he showed his driver’s license as an example of the fake licenses he was always making (and selling to teenagers).

eta: Oh, there’s a video titled The History Of Creed - The Office US … I’ll have to watch that.

no one has mentioned it yet, but the music that the Mynah Bird in the Inki cartoons hops along to is “Fingal’s Cave” from Felix Mendelssohn’s The Hebrides. It’s one of those pieces of classical music that you’ve heard many times but don’t know the name of because no one ever told you. Now you know.

It was inspired by Mendelssohn’s visit to the Scottish island of Staffa, to the cave with the aforementioned name. the seaside cave is known for its acoustics, which are said to have somehow inspired the music. The cave is named after the character Fingal from the epic Ossian poems published by James MacPherson, supposedly the work of the ancient “Homer of the North”, but, it turns out, actually a forgery by MacPherson. (Fingal really was a character from Irish mythology, but he rose to greater fame in the 18th century because of the popularity of MacPherson’s poems, which are probably responsible for the naming of the cave.)

Just so you know.

i find Inki’s name and appearance to be cases of blatant and objectionable stereotyping. But at least he doesn’t act in an insulting fashion, do anything stupid, or get clobbered like the Coyote. He just seems to be bewildered by the doings of the Mynah bird. Besides, he’s cute, even though stereotyped.

Small one:
In Law And Order: Criminal Intent, in Season 3 when actress Katherine Erbe (Det. Eames) took medical leave for her real life pregnancy, she was replaced by an up-and-coming stylish red head detective in a black power suit named G Lynn Bishop (played by Samantha Buck). After her last episode, she vanished with nary a mention of her fate.

I’ve been rewatching some season 4 epsiodes, and I’ve noticed in the background in several episodes a stylish redhead detective in a black power suit, talking on the phone, doing detective things. It’s not the same actress, but I’d like to think it’s supposed to be Bishop, still in Major Case. Yay! Continuity!

Seems unlikely. When Diane Neal joined the cast of *L&O: SVU" she was a redhead, but then went more blonde over the course of her four seasons on the show. I read somewhere that it was because the show bible specified a blonde ADA.

She’s the only one.

Don’t forget the CI episode “Seeds” where ginger Michael O’Keefe sperm donates and is responsible for half the red heads in NYC.

HA! I’m not the only one that noticed. The first three are series regular detectives.

I was reading the latest thread about about Pineapple on Pizza, which included some comments about sweet corn on pizza. @MrDibble commented that in his country “sweetcorn” usually meant canned creamed corn, and the non-creamed variety was called “kernel corn.”

Oh. Well that explains that officer’s name in Catch-22. (I’ve still no idea if there’s a deeper meaning to “Colonel Cathcart”.)

Oh. Well that explains that officer’s name in Catch-22. (I’ve still no idea if there’s a deeper meaning to “Colonel Cathcart”.)

I assumed it was connected to “catheter.”

I did a bit of googling, and found a site that described his character as very changeable, alternately smug and dejected, obsessed with “feathers in his cap” and “black eyes.” The site noted that his name was an anagram for “Catch rat” and “Catch art,” but I’m not buying that as being intentional.

However, until this morning I’d never caught the double meaning of Orr/oar. (I was looking over the Wikipedia list of characters.)

And, because “kernel” and “corn” have the same word derivation, there’s a bit of the Major Major effect there.

I knew Michael Crichton wrote the screenplay for the original 1970s Westworld film, but it only just recently hit me that it and Jurassic Park share many of the same themes. I don’t know if it’s fair to say Jurassic Park is Westworld, but with dinosaurs, but they both have the same basic arc of “billionaire builds an amusement park populated with creatures he created using science, doesn’t consider all the ramifications, and then everything goes to hell.”

I knew Michael Crichton wrote the screenplay for the original 1970s Westworld film, but it only just recently hit me that it and Jurassic Park share many of the same themes. I don’t know if it’s fair to say Jurassic Park is Westworld , but with dinosaurs, but they both have the same basic arc of “billionaire builds an amusement park populated with creatures he created using science, doesn’t consider all the ramifications, and then everything goes to hell.”

Not only that, but the Park doesn’t really properly keep track of things and look out for abberations, assuming that they already know all they need to, and that nothing can go wrong. Naturally, it does, spectacularly.

I noticed the similarities a long time ago, and decided that the people running Crichton’s fantasy parks clearly didn’t know how to do their jobs. Any scientist, engineer, or technician worth his or her salt would know enough to keep an eye out for things going wrong.

I noticed the similarities a long time ago, and decided that the people running Crichton’s fantasy parks clearly didn’t know how to do their jobs.

“Yeah, but when the Loop the Loop breaks down at Action Park it doesn’t start eating the customers.” – Ian Malcolm.

I think a pretty good case can be made that the people at Action Park didn’t know how to do their jobs, either.

But at least the rides there didn’t actively go out to attack the customers.

There a great scene in The Blues Brothers when Jake and Elwood go to Chez Paul to convince their horn player to rejoin the band. Elwood does a perfect 180 slide up to the curb in the ancient Dodge police car and stops right at the restaurant’s awning. It’s fantastic.

I was watching that for the thousandth time a couple nights ago and finally noticed the other cars in that scene. A Rolls Royce is just pulling away before Elwood arrives, and he comes to a stop a few feet in front of a vintage Bentley. I didn’t think that scene could get better, but this is fucking brilliant.

Does anyone remember this old flash animation from the early days of viral internet videos (which upon further research I learned was not an actual ad for Kikkoman; it’s just a silly video someone made)? I was reminded of it the other day when discussing different styles of soy sauce, and it suddenly hit me: The Japanese word for soy sauce is “shoyu”, which is pronounced more or less like “show you”. It’s a cross language pun! 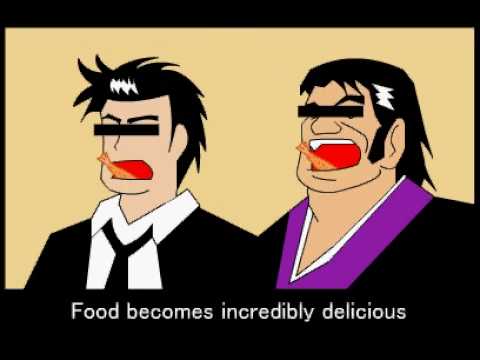