Okay, why didn't y'all tell me about The Increasingly Poor Decisions of Todd Margaret? 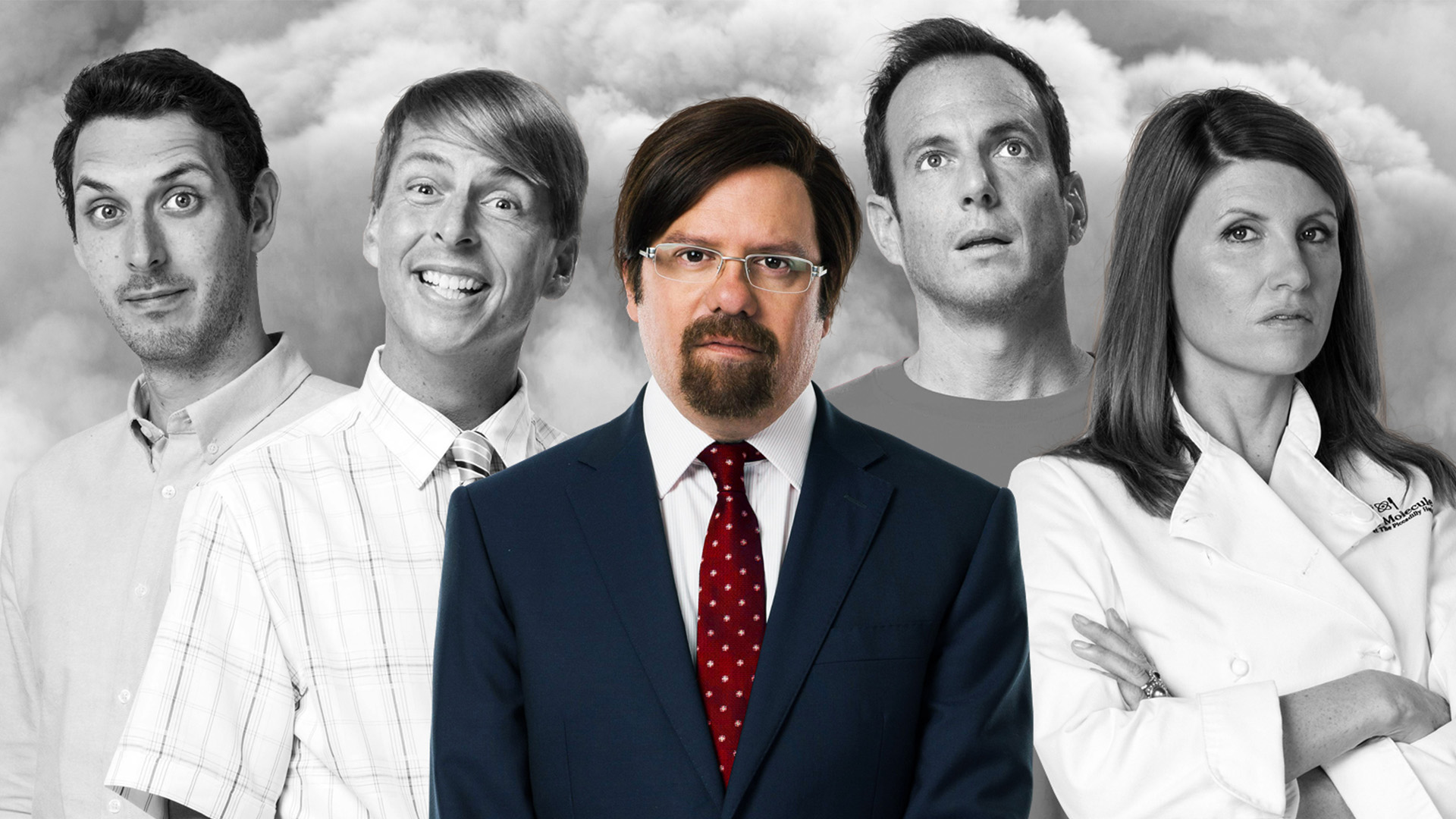 From the creative mind of Emmy® Award winner Cross, this tale of an American’s business snafus in London picks up after Todd Margaret reluctantly blew up the world at the close of season two. Jack McBrayer (30 Rock) joins the cast while guest stars...

I was dvr-ing Portlandia and I noticed that the episodes appeared to be an hour long. Of course, the show is 30 minutes, but my dvr decided to tape the following show, The Increasingly Poor Decisions of Todd Margaret.

It stars David Cross as a nitwit salesman who somehow convinces a company to hire him to sell their muscle mass supplement in the UK. I think he lied and said he was English, which of course he’s not. It has one of the guys from Arrested Development as his foul mouthed boss, and his British assistant is in fact some aristocrat who quite enjoys inserting our Todd into ridiculous predicaments whilst pretending to be subordinate to Todd.

I think I saw the premiere and second episode (the latter starred the funniest man in Britain, Peter Serafinowicz). Holy shit it’s good. Apparently it’s on Channel 4 in the UK. It airs Fridays after Portlandia on IFC stateside.

Anybody else watching? Oh yeah, the theme song is written and performed by Johnny freaking Marr. Can it get any better?!?

It sounds like what you saw was the second episode of the second series. The first one is just as funny.

BTW, (spoilers for the first series), In the second series, it’s clear that Dave is actually Mr. Mountford, who is responsible for setting up the company and the situation that Todd and Brent find themselves in. But we didn’t learn that about him until very late in the first series. His real motive hasn’t been explained, but it appears it was all done to amuse himself.
Also once you see the first series, you’ll understand a bit more about Thunder Muscle.

It sounds like what you saw was the second episode of the second series. The first one is just as funny.

Yeah, I meant to say that. I started watching the first season on Netflix!

I was dvr-ing Portlandia and I noticed that the episodes appeared to be an hour long. Of course, the show is 30 minutes, but my dvr decided to tape the following show, The Increasingly Poor Decisions of Todd Margaret.

Sorry I didn’t tell you about it - it’s not to everyone’s taste, but I like it… The little song and dance Todd does in the first episode of the second season (in Alice’s restaurant) cracked me up.

I watched the first episode and laughed, but not enough to seek out more. It felt a little too cynical for me. I was hoping to hear a little more buzz about it, and, when I didn’t, never got back to it.

I think the first season was added to Hulu or Netflix; maybe I’ll circle 'round back to it.

I watched the first episode and laughed, but not enough to seek out more. It felt a little too cynical for me. I was hoping to hear a little more buzz about it, and, when I didn’t, never got back to it.

I think the first season was added to Hulu or Netflix; maybe I’ll circle 'round back to it.

Yep, Season 1 is on Netflix. I watched a lot of the second episode. I’m not quite clear on why his assistant David is such a dick to him… sure, Todd is a liar, but he’s stringing him along instead of saying, “Look I know you’re not from Leeds, come off it!”

The Onion AV Club sort of nailed it when it said the show, at least in its first season, was kind of a one-gag premise (“Todd is a horrible fraud and jerk and let’s show him doing fraudulent and jerkish things”) that was based on (paraphrase) the hit-or-miss charms of David Cross, whom they characterized as being really funny in about one out of three of these (soon fairly repetitive) gags. There’s some broad visual humor involving Todd soiling himself, Todd having an erection lasting several hours, etc. etc. The reviews also (rightly, as to the first season) faulted the show for not really having any well developed other characters. Will Arnett is probably the closest they got, and he’s just being an over the top jerk too (which admittedly he does even better than Cross). Dave just sits around smirking and tormenting Todd for most of the first season, and the love interest is pretty but extremely superficial and implausible (as written).

There may be a more focused attempt to develop good subplots and characterization (which Arrested Development had in spades) this season.

Part of what hampers my enjoyment a bit is that unlike when he was playing Tobias, a vain but pathetic, but never bombastic, loser, Cross was a good figure of fun, pity, sympathy. Cross’s reputation IRL precedes him as being an often-angry, arrogant, opinionated, rude . . . jerk. To the extent that Cross had much more creative input here than in AD, I’m often taken out of the moment by thinking Todd Margaret is kind of just Cross being Cross (Google his fairly numerous rants and not-too-funny political diatribes and/or shouting matches with hecklers in his stand-up).

I’ll continue to give it a chance but aside from the sometimes one-dimensional characterization, I wonder how this plays out as an ongoing show given that it’s kind of a serialized caper/heist story rather than something that you can imagine running for years. The Brits seem to do a better job of making (and enjoying watching) those kind of one-off series-or-two shows, U.S. audiences (and networks I guess) seem to want a show that can run for at least six years and get into syndication.

I thought at first it was because we hate Hippy Hollow ;), but then I remembered I didn’t make it through the first episode. Cross is a character actor, not a leading man. There is a place for both, and the former has a much longer shelf life than the latter, but leading men need to sock away their money against a rainy decade while character actors can always find work.

I’m still watching but it’s not as funny as the first few episodes (I think I may have even stopped watching for a bit last season).

I think it would be funnier/better if it just featured a fairly normal guy, in over his head as a lead sales rep, getting caught up in some of the lies he spun to get the job. But instead his actions are so over the top implausible it takes away any charm the show might have.

Can we agree that Johnny Marr’s theme song is brilliant, though?

Whoa… by coincidence, I am watching this right now. At this moment. Now. Wow.

We just signed up for streaming Netflix, so the daughter and I started watching Arrested Development, and Netflix suggested Todd Margaret. I said “Hey, David Cross’s standup albums are great, let’s try this.”

I love it. For me, David Cross IS charming and funny enough to carry a series… even if that series were just him reading cupcake recipes from a raft on Lake Okiboji in Iowa.

Hey, there’s a third season of Todd Margaret on IFC this month. It’s going in a weird new direction…

Very weird. Not at normal like the first series

I think if you liked the first one you’ll at least watch the second one. Except it’s actually the third season, so apparently the first storyline was two seasons.

Hey, there’s a third season of Todd Margaret on IFC this month. It’s going in a weird new direction…

Thanks so much for bumping this – I’ve got to find a way to see it.

I didn’t tell you about it because I don’t particularly like it. There’s something about cringe humor that’s sad - it’s not a very good feeling to feel embarrassed for a character.

That would be Will Arnett, who is generally awesome… although did it escape you that David Cross is also one of the stars of Arrested Development (“I just blue myself”)?

But yeah, it’s a hilarious show. Binge watched it as soon as I found it on Netflix.

He’s not a compulsive liar this season. There was more to the show than that, though I have to admit not much more. I don’t know what it is about this show that keeps me watching, it’s the same thing with Last Man on Earth. I guess I like watching train wrecks.

[spoiler]The scene at the very end of the very last episode looks familiar, I think it’s from one of the episodes from season 1 or 2, but I couldn’t quite place it. Can you remind me?

Or is it not from anything?[/spoiler]