People are stuck on a highway in Virginia 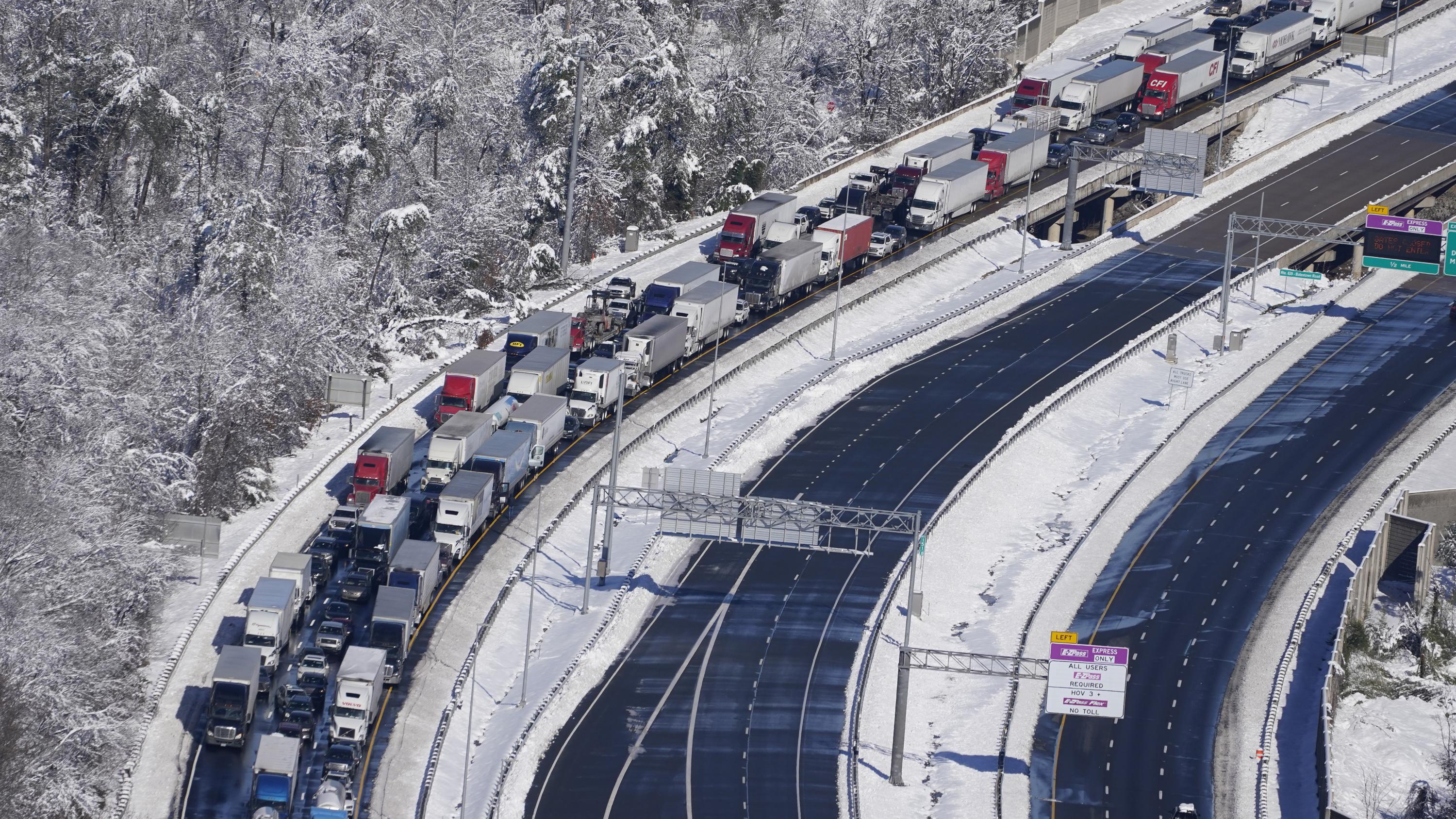 RICHMOND, Va. (AP) — Hundreds of motorists waited desperately for help Tuesday after a winter storm snarled traffic in Virginia and left some drivers stranded for nearly 24 hours in freezing temperatures along an impassable stretch of interstate...

I was just reading about this. I understand why the governor isn’t using the national guard troops that are on stand by to clear the roads – it seems like a long and slow process no matter what.

But I don’t understand why they are not having troops go down the line of stranded cars with blankets, food, water, and essential medicines like insulin.

I heard on the radio just a bit ago that emergency medical folks were passing out food and blankets and such in some areas. But what a mess!!!

I’m listening to NPR right now – they are interviewing Senator Tim Kaine, who was stuck in the traffic jam (and who is quoted in the AP article in the OP).

He just arrived at this office in D.C., so he’s out of the traffic jam (which is sounds like may now be resolved), and says that he was in the car for nearly 27 hours, in total (including 2 hours driving before getting stuck).

Nightmare scenario for sure. Al Roker on Today not-so-subtly pointed the finger at the Virginia DOT for not being prepared for the emerging weather conditions.

While the Guard probably could not do much to clear traffic or snow. I sort of wonder why they where not able to do low, very low and slow of water food and blankets. Shit, the Coast Guard works in all kinds of weather. Perhaps use them to winch down some supplies and personnel.

No one can stop the weather, but it seems to me that the resulting fustercluck was mismanaged. Even if you can’t get the jam untangled there should be some sort of provision for either providing food/water/etc. to the stuck or being able to evacuate people.

The gov was quoted as saying they were prepared for the storm that was forecast, but the actual storm was worse. Seems a pretty weaselly excuse.

I also saw someone from Virginia DOT say that they warned people to stay off the roads. So a little bit of finger pointing the other way, as well.

Ok, sure, but there will always be people who intended to be off the road but were delayed (possibly by worse than predicted conditions). And sure, people should carry emergency supplies when traveling. That doesn’t change the government should also have the means and will to attempt to help people who get stuck on the highway.

Yeah, that’s fair. But, I would hazard many of those stuck were just passing thru Virginia and may not have received the VDOT warnings. I-95 being an interstate and all.

It’s interesting reading about how people shared supplies with one another and cooperated, given the high level of uncertainty about when things may have been resolved. A lack of law enforcement or other civil authority figures - people just did what comes naturally, even with a shitty situation. I guess there IS some good in the world.

I am intensely curious to hear from an electric vehicle owner who was among those stuck.

I am reminded of a news story several years old now, about a 3-day highway jam in China.

I can recall being stuck in ordinary weather on I-95 between Richmond and DC. Just too much traffic. The picture in the paper made it seem like it was nearly all trucks. There was a line of cars in the third lane, but aside from that, all trucks.

But they are just not prepared for that kind of weather. I can remember once being in Richmond during a 2" snowfall that paralyzed the city. Nobody would even notice that in Montreal.

I was talking with a business in Virginia that just got its electricity back.

Yeah, flow-wise 95 between Richmond and the Beltway can get pretty bad even for 95. It seems to have been made from the premise that the “Southern” states would never generate this sort of traffic and is forever in a state of being worked on with no apparent impact.

BTW, in another sign of the perverseness of the universe, on Monday itself, Virginia DOT had posted a listing for a Crisis Communications Manager. https://twitter.com/DaybookJobs/status/1478517520776658946 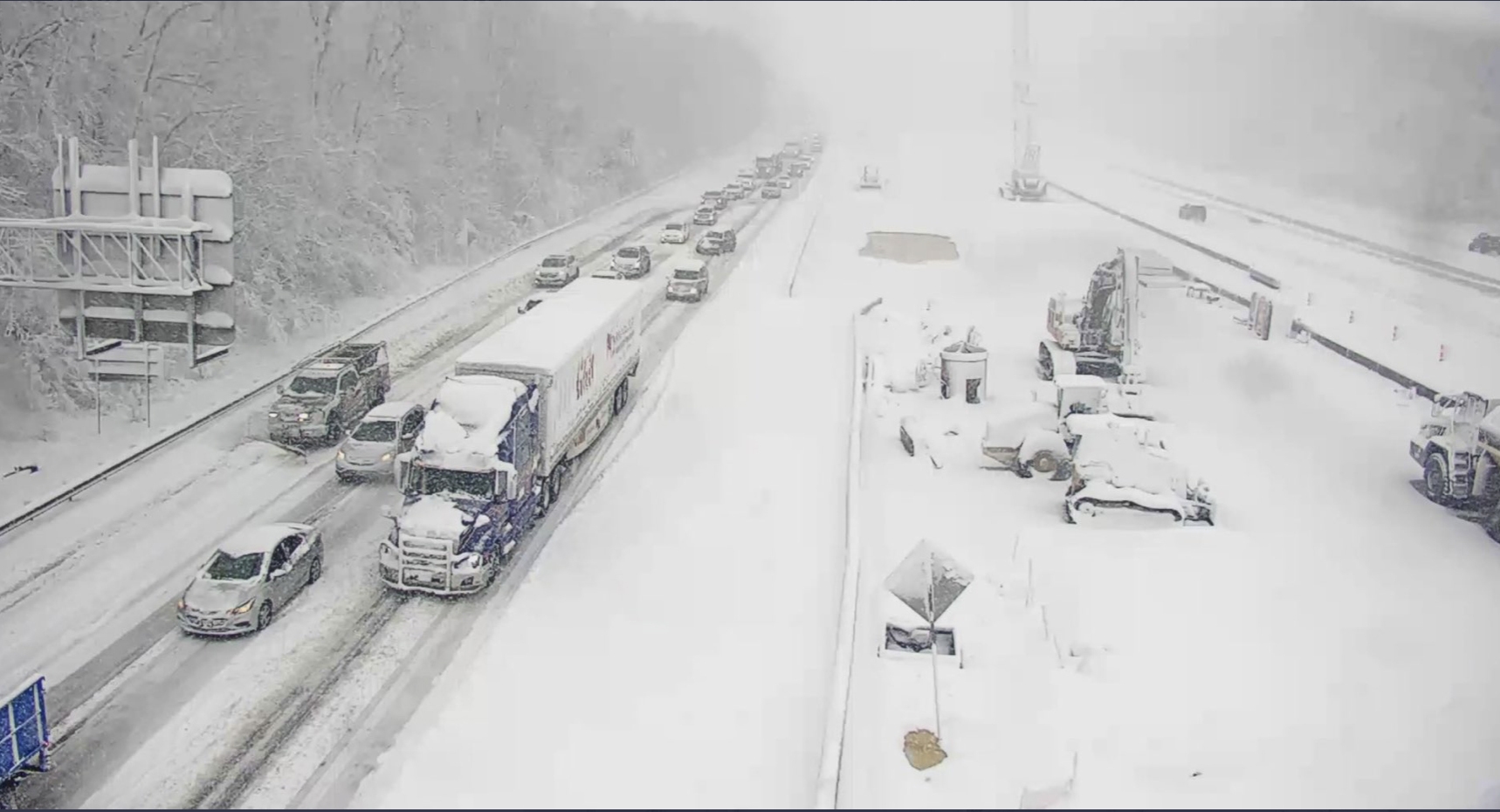 A Richmond man not only got stranded on Interstate 95 in Virginia during this week’s snowstorm but was also hit with a massive Uber bill.

“I was coming in from San Francisco and didn’t really realize what was going on here,” [Andrew] Peters told WTOP, explaining that he hopped in an Uber bound for Richmond after landing at Dulles International Airport.

His Uber driver apparently did not realize the severity of the situation either, because the driver went on the highway and got stuck in the traffic disaster.

Peters made it home after nine hours and paid a $200 Uber bill. However, Peters said Uber then tacked on $400 in additional charges, raising his bill to $600 in total.

Peters is disputing the additional charge.

But they are just not prepared for that kind of weather. I can remember once being in Richmond during a 2" snowfall that paralyzed the city. Nobody would even notice that in Montreal.

This whole mess is local to us: we live north of the jam, but quite near I-95, and on a GOOD day that stretch of 95 sucks. We joked with a relative who lives in Richmond, 90 miles south of us, that the reason we don’t see more of him is that it’s a 5 hour drive.

The DC area in general just doesn’t deal with snow all that well, We’re in a transitional area. We don’t get enough for people to have things like snow tires and chains (like places further north). but we do get enough to need plows, sand trucks, etc. A couple inches of snow genuinely causes localized messes but this is the first time there’s been a jam of this magnitude in our 30+ years here.

A few years back, there was an ICE storm that hit just before the evening commute. I happened to leave work just in time to avoid the worst of it, but heard horror stories of people stranded for hours in the Springfield Interchange (about 50 miles north of Fredericksburg).

And we’ve had 45 minute commutes take 3-4 hours one way due to ill-timed afternoon snowstorms, on several occasions.

The inability to salt the roads first is plausible - the weather definitely behaved differently than had been predicted. Plus with that much snow, there’s only so much a bit of salt can do. Widespread power outages and downed trees are not the norm in a snowstorm around here - not that they don’t happen, just not as much as with this unexpectedly wet / heavy snowfall.

Also, the snow had finished by mid-afternoon - so I really do NOT understand why people were still stranded there 12+ hours later.

An opinion piece on the Washington Post mentioned the issue of electric cars, which do NOT do well in this situation. Their range / performance goes down, and you can’t borrow a gallon of electricity from the AAA truck. I got the sense, from the piece, that the author was rather truculent and anti-EV - but that is something to consider when car-shopping.

A few years ago, I was in Vermont in early November, to take my daughter to a medical appointment in another town. And it snowed that day. Not ideal, especially since the road between the two towns is 2 lane, winding, and hilly, but this is Vermont, they have plows - and I had rented an all-wheel-drive SUV. I called the hospital that morning to make sure they were still seeing patients, and I think the person who answered was baffled as to why I thought things would shut down for 3-4 inches of snow.

Only, despite having learned to drive in an area where we got snow, and being in a good vehicle for the weather, and driving very carefully, I demonstrated how treacherous things can be: on the busy main street, while driving very carefully, at a moderate speed, and giving myself MUCH extra time to slow down, I wound up sliding right through a red light. Fortunately the side traffic had not yet started to move. It goes to show how even doing stuff right, slip happens. And on a heavily-trafficked corridor like I-95, any little thing can literally snowball and create a massive clusterfuck.

I was much chastened by that little escapade. I called my daughter’s place (which was up a steep gravel road) and had them drive her down to the main highway in one of their big trucks. I’m pretty sure I left dents in the steering wheel from white-knuckling that 70 mile drive. And if I ever move to Vermont, we will damnsure get snow tires for our vehicles.

Here’s that WaPO article I mentioned. It quotes one trucker who helped out a family in a Tesla.

When they realized the situation was going to get this bad they should have shut I-95 down.