In this thread, Just deal with the ticket, the posters say… , several posters make reference to the number of points a ticket has.

Can someone explain this briefly? If Illinois has such a system I am blissfully unaware of it.

Just look up Points System on Wikipedia. Basically, you get varying numbers of penalty points for various offences, and if when you reach certain target(s) Bad Things Happen, such as having your licence temporarily revoked. Round here, that also tends to mean that next year’s car insurance bill goes up massively, so it’s at least a double whammy.
In the US, it appears that there are points systems in California, Colorado, Florida, New York, and Texas.

I am not a traffic lawyer or police officer, but here’s my understanding of how the point system works here in Colorado:

Points are a way to punish chronic offenders by keeping track of past offenses. When you get a traffic ticket (speeding, running a stop sign, DUI, etc) in addition to the fines / jail time, you also get X points on your license.

If you accumulate a certain number of points, then the state revokes your license. For Colorado adult drivers (under 21 and under 18 have different standards), this is 12 points in a 12 month period, or 18 points in a 24 month period. A ticket for going 15 mph over the speed limit is 4 points. So if you get three of those in a year, then basically the state says that as a repeat offender you’re no longer privileged to drive. A common offer in a plea bargain is to plead guilty to a lesser charge which has fewer points than the original ticket. Only points for violations that you were convicted of or plead guilty to count. So if you were ticketed for 15 mph over (a four point violation) and plead guilty to 9 over (a one point violation) you’d only get one point.

I did some googling, and it looks like Illinois does have a point system, but it’s different than Colorado’s: 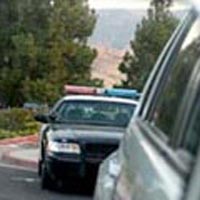 Everything you need to know about the Illinois point system and how traffic tickets can affect your SOS driving record.

So it looks like that state has a flat “three strikes” on traffic convictions in a given 12 month period, and on the third one your license is suspended for a period based on how many points you accumulated in those convictions.

Darn, I messed something up and I’m past the edit window.

Correction: at the point threshold a Colorado driver’s license is suspended for up to a year, not revoked. I don’t think the point system by itself can lead to a revoked license, it seems to be an option for a judge during sentencing of severe chronic offenders, especially alcohol related.

I think most states have a point system. Some states share that information and offenses that occur in one state may show up on your home state record. Some don’t. In general you get points for moving violations but not for things like equipment violations. Generally more serious offenses have higher points. For instance the offenses that have the highest points are things like passing a school bus with its signals on and racing. The points are generally set by the state DMV rather than the court. Each state is different and you would have to look up the particulars for each one.

Here is the official booklet from the Illinois Secretary of State: http://www.cyberdriveillinois.com/publications/pdf_publications/dsd_dc1914.pdf

I was surprised that in my state, you need 30 points to get your license revoked, but deliberate vehicular homicide only nets you 15! I guess you have to wait three years between committing highway-terror related murders if you want to hold on to your license.

Something worth mentioning- in California anyway, if you go to traffic school you still have to pay the fine but you don’t get the points on your driving record. I have always done this when it was an option. However you can’t go to traffic school if you already went within 18 months.

Commercial drivers are also under stricter standards, one of which is going to traffic school is no longer an option, meaning every commercial driver has an incentive to try to fight whatever ticket he receives.

The UK uses a points system- 12 points in three years and you’re disqualified.