And I’ll bet you he has no idea what those reasons are. (“ooh, colors, let’s have lots of those for my photo op!!!”)

Are the ones in red invariably doomed to die?

In a wider shot you can see a baby’s face on the sun, explain that.

I thought the shirts were more reminiscent of the Wiggles, personally, but to each his own.

But the Wiggles have a blue shirt and no green. In most similar lineups where there are three or more colors present, at least one of them seems to be blue. Wiggles, Powerpuff girls, Teenage Mutant Ninja Turtles, Storybots, Carebears, etc., all have at least one blue character. Not so the Teletrumpies. 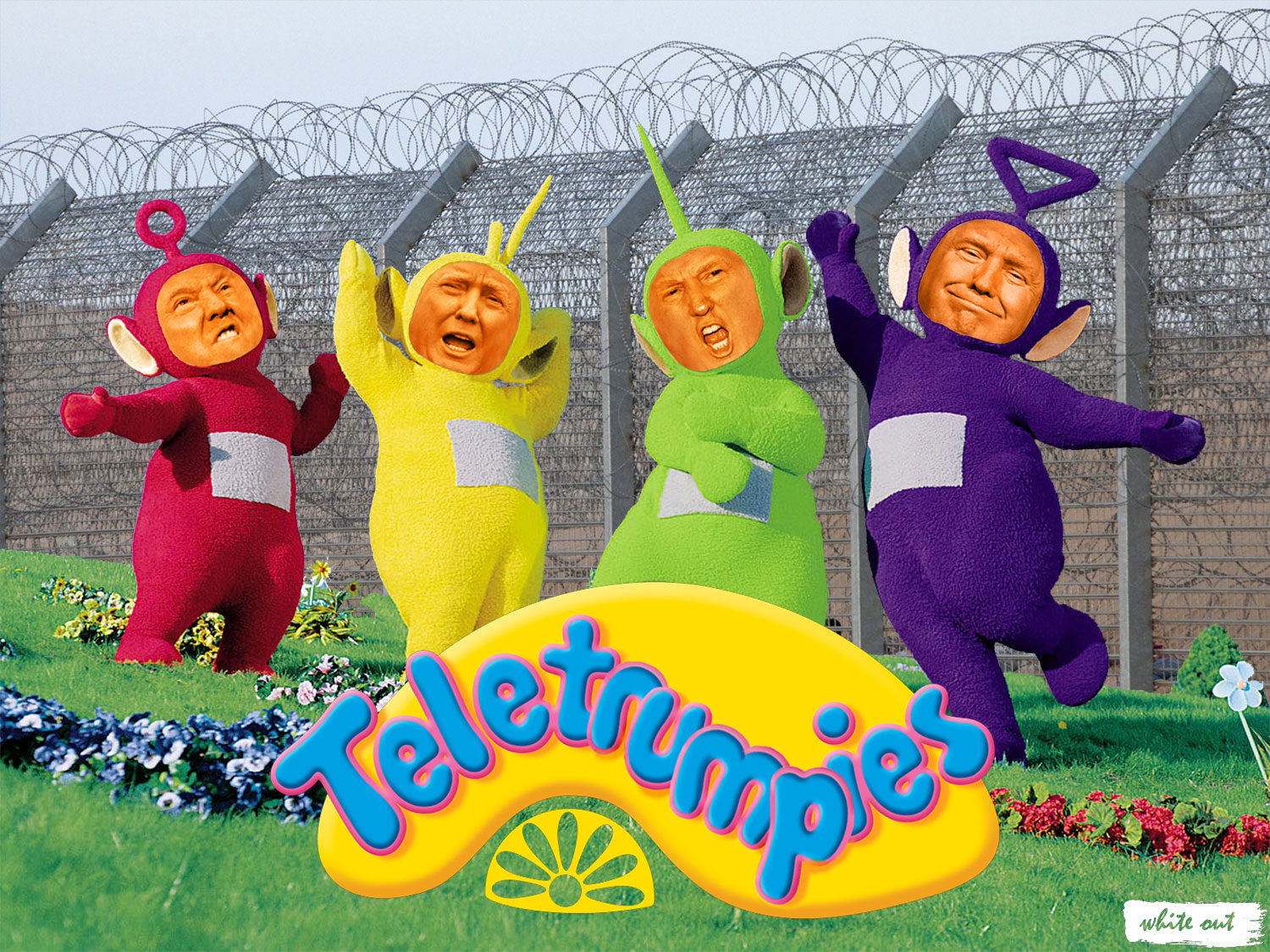 And the final smoking gun (or smirking sun, if we’re being literal) that proves it.

On Donnie’s new website (I’m showing the picture here so you don’t actually have to click on his shit), he appears to have a cameo in a new live-action Teletubbies movie. Aren’t conservatives supposed to be afraid of Tinky Winky?

I bet it really gets his goat that he is no longer saluted.

Come to think of it, I would be willing to bet that he has the uniformed workers at Mar A Lago salute him.

…he has the uniformed workers at Mar A Lago…

Uniformed as well as uninformed.

It took three readings to realize those were different words.

Major companies aren't offering former Trump Cabinet officials lucrative positions serving on their boards, as the toxicity of the former president's brand chokes off traditional money-making opportunities for senior alums of his administration.

…
Headhunters who have sought similarly prominent work for [Elaine] Chao have found little interest, according to two headhunters she’s consulted personally. The headhunters, speaking on the condition of anonymity because of the sensitive nature of the discussions, said top executives wary of backlash from associating with former Trump officials are boiling down Chao’s four-decade Washington résumé to its most recent entry: long-standing ally of Donald Trump, despite her resignation the day after the Jan. 6 attack on the Capitol.
…

Headhunters and other corporate advisers say the calculus for executives at most large, publicly traded companies is simple. Trump — the only president to be impeached twice, the second time on a charge he incited the mob that assaulted the Capitol in an attempt to overturn the presidential election results — left office with a majority of Americans strongly disapproving of his job performance. He remains a lightning rod for controversy and faces ongoing legal exposure from civil lawsuits and criminal investigations. Offering a board seat to anyone in his inner orbit risks inviting a revolt from customers, employees or shareholders.

“Boards don’t need trouble or criticism,” one headhunter said. “If you want to stay away from all that potential tarnish, that’s easy: You just don’t go near it.”

Boo-fucking-hoo. Getting rid of that trumpy stank ain’t gonna be easy. Drinking (or injecting) bleach might do it. 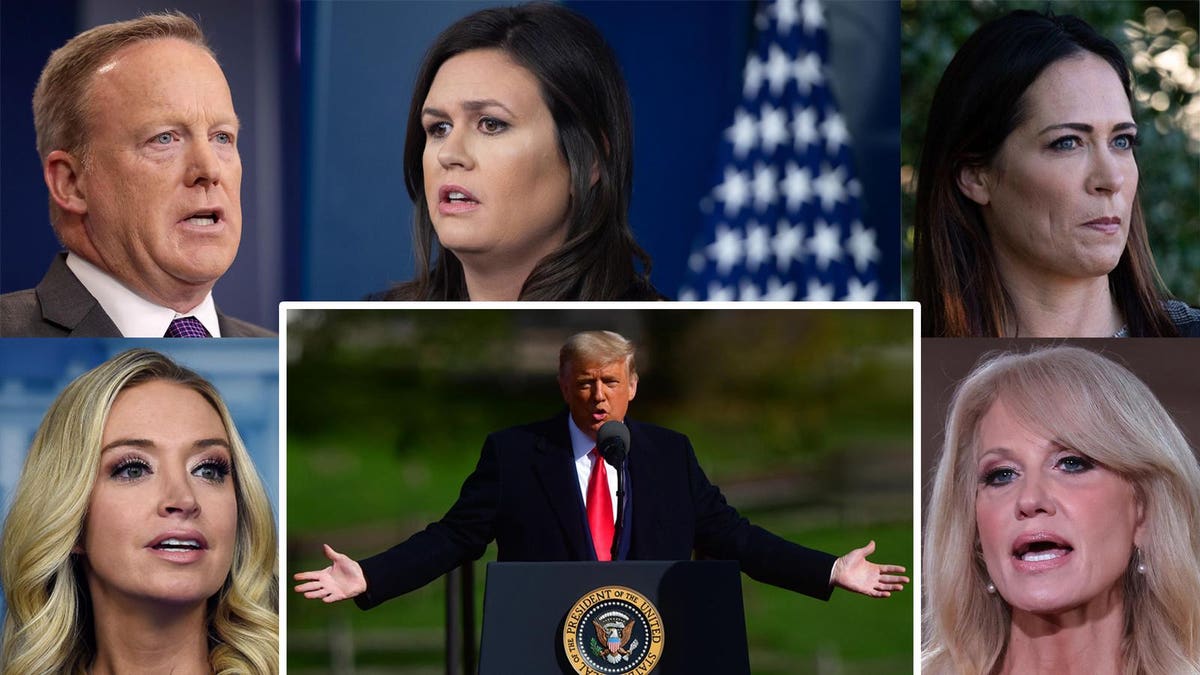 A Truth Reckoning: Why We’re Holding Those Who Lied For Trump Accountable

As American democracy rebounds, we need to return to a standard of truth when it comes to how the government communicates with the governed.

…they’re assuming (correctly, IMO) that Forbes’ sentiment doesn’t only apply to those sycophants.

By the early 2040s, Trump-appointed chief judges will simultaneously sit atop nearly every appeals court in the country.

The Trump presidency may be over, but the Trump era has only just begun—at least when it comes to influence over the nation’s courts. Measured solely by the number of judges he appointed, Donald Trump’s impact is staggering: 234 judges, including 54 powerful appellate judges, almost one out of every three. By comparison, President Barack Obama appointed 172 judges (30 of them appellate) in his first term, while George W. Bush managed 204 (35 appellate). But Trump will have an even greater influence than this measurement suggests. That is because his judges won’t reach the apogee of their power until the early 2040s, when Trump-appointed chief judges are on track to simultaneously sit atop nearly every appeals court in the country.

This portends a potential disaster for progressive gains in many areas of law, including voting rights and health care. The limelight typically falls on the Supreme Court for these developments, but the lower courts are where much of the action happens. In its most recent term, which ended in July, the Supreme Court issued 63 signed opinions. The Circuit Courts of Appeals, by contrast, decided or issued orders on 48,300 cases in 2020. Although the Supreme Court has the final say, and Trump’s three new justices will shape the law for decades, the large majority of appeals—more than 97 percent—will be decided by the 12 geographic circuit courts, and the 167 appellate judges who sit on them. And the individuals who wield the most influence in shaping those outcomes are the chief judges of each circuit.
…

With any luck I’ll be dead by then. Best wishes to you youngsters.

With any luck I’ll be dead by then. Best wishes to you youngsters.

By the early 2040s, Trump-appointed chief judges will simultaneously sit atop nearly every appeals court in the country.

And they all ruled against him in his election steal bullshit. I think we’re gonna be OK

Trump slashes at McConnell as he reiterates election falsehoods at Republican...

The former president used most of a speech to GOP leaders to fling familiar grievances.

Former president Donald Trump called Senate Minority Leader Mitch McConnell a “dumb son of a bitch” as he used a Saturday night speech to Republicans to blame him for not helping overturn the 2020 election and reiterated false assertions that he won the November contest.

“If that were Schumer instead of this dumb son of a bitch Mitch McConnell they would never allow it to happen. They would have fought it,” he said of election certifying on Jan. 6, the day his supporters led an insurrection on the Capitol to block Joe Biden’s formal victory.

Trump spent much of the speech, with many senators in the room, lashing into his former ally in personal terms, often to cheers from the party’s top donors. .
…

One of the few times I can honestly say that I agree with trumpy – with a qualifier: McConnell is certainly an SOB, however, he’s far from dumb.

How close did that come to Mar-a-Lago? One of the stories said it was near West Palm Beach.

This is a great opportunity for trumpy to make some political hay. He can claim Biden shot a missile at Mar-a-Lago but due to Democratic administration incompetence, it missed. The Deep State is trying to silence him–stuff like that. Surely his lackeys can spin this into something trumpy’s followers will love.