Predictions for Albert Haynesworth as a Patriot? 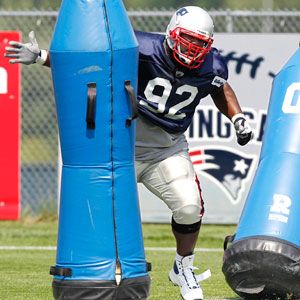 Haynesworth looks to restore name as a Patriot

How will he do? Do you think he’ll turn himself around as he claims? If he did it would be a huge slap in the face to the Skins. I think he’ll be better in NE, as he couldn’t be any worse than he was in DC, but he’ll never reach his former glory.

Maybe it’s wishful thinking, because I do like the Patriots, but I think he will pull his shit together. He has strong personalities like Belichick and Brady to keep him in line, and being on a winner has a way of calming people down.

I don’t like the Patriots, but I think Ochocinco and Haynesworth were brilliant moves. I expect they’ll do extremely well, and I think the Pats are clear favorites to win the AFC.

I think Patriots fans are going to be very happy they got him, the same way the Moss trade worked out as a big net positive (even if the end was messy). And if he doesn’t work out, they’ll get rid of him and be on their way. I don’t think Ochocinco much left to contribute but I don’t think he’ll hurt them.

A motivated Albert Haynesworth next to Vince Wilfork is a scary thought. That’s a lot of beef.

He’ll implode sooner or later, like Moss did. Shaun Ellis was a much better pickup for the D-line.

I predict he still won’t get up after being knocked down and chase after the QB.

He’ll be a situational player. The Pats play a 3-4 most of the time, and Haynesworth doesn’t fit anywhere. So he’ll be part of nickel and dime packages, and maybe occasionally spell Wilfork or line up next to him in that weird two-down-linemen-and-everyone-else-standing look they trot out.

I think he’ll be relatively productive in limited playing time, but he’s never going to be a DPOTY with the Pats.