One chess pro in one of the videos on the show noted that that was actually the most unrealistic bit of chess in an otherwise realistic chess show. In his opinion NO ONE could do that against multiple grandmaster-level players in that fashion. Though he did opine he’d love to see Magnus Carlsen try

I had assumed that the grandmaster of the three was the chess problem guy - titles have been given for problem composition since 1959, although the first GM titles weren’t granted until 1972. That would leave Benny as the top player there.

She played them simultaneously AND at speed times in the show, correct? I can’t actually think of an example where that even happened, though if you told me Hikaru Nakamura had done it online, I would believe it.

That said, I do remember something remarkable, which is Gary Kasparov playing the Israeli national team in clocked simultaneous chess in 1998, four games with one color and then four games with the other, and ending with six wins and two draws. All the players on that Israeli team were grandmasters IIRC. (I can find a lot of references online referring to the event, but I can’t find anything comprehensively describing it)

I read the book a loooong time ago. I remember that I enjoyed reading it, but when I saw the mini-series I realized I hardly remembered anything about the book except the very broad strokes. I didn’t remember any of the names, including Beths. I didn’t remember the drugs from the orphanage nor the troublesome relationship between her foster parents. Beltik, Townes and Watts had blurred together.

I did remember one detail though:

The penis-shaped candles at the beatnicks house.

What can I say, I was a teenager then!

…The book is on my to-read list. I will be interested to hear from you how closely the miniseries follows the book.

Just finished the book, and I enjoyed it, as I suspect anyone who liked the show would. The show is faithful to the book in its broad outlines, but there are some relatively significant differences.

In addition to the NSFW point noted above,

Just finished the book, and I enjoyed it, as I suspect anyone who liked the show would

Thanks for the excellent response!

I had assumed that the grandmaster of the three was the chess problem guy - titles have been given for problem composition since 1959, although the first GM titles weren’t granted until 1972.

Hey - I’m both a problem-solving GM and a former UK Speed chess champion!

But I agree that facing 3 opponents would be jolly difficult.
(I reckon it would be easier facing two; not just because of the lesser numbers, but also because you could have one White and one Black.)

Getting late to the party with this one – just binged the mini-series almost completely in one day.

I enjoyed it thoroughly, but a number of things threw me a little bit out of the story, and I’m wondering if it’s just a simple matter of suspension of disbelief and dramatic license.

One of the biggest things I didn’t understand was her difficulty in securing the funds to go to Moscow. Now this is all set during the middle of the Cold War, and you have this American chess phenom – and not only that, a female phenom in the male-dominated chess world – and the only people interested in paying her way to Moscow to play the champion GM is a group of evangelical Christians? Huh? This is also a dramatic world where chess is popular enough to have a giant magazine for sale at the pharmacy next to LIFE magazine and the popular periodicals of the day. I know there’s a throw-away line about her pissing off the USCF, but I don’t see how the national chess organization or the US government squanders their best opportunities to show up the Russkies by making her pay her own way.

Then they giver her this … overseer/handler … who doesn’t seem to care that she walks away from his oversight at the end. Like just drives away, as if he’d be allowed to do that.

Also, I understand this is a bit of a fairy tale and dramatic conventions and shortcuts must be taken, but are most tournaments of this single elimination style? All the world championships I know of are usually gruelling sets of many matches. I’m not sure how the regional and national tournaments are, but I did find that somewhat distracting that everything came down to one game, and it sucks a little at that level if you drew black. I know, I know – it’s dramatic this way, but it would be a bit more dramatic for me and with more verismilitude if at least one of the matches went to a tense series of back-and-forths.

Yeah, there’s a few other things that niggled at me – like while I felt she was well-known in-story, I’d think her level of media exposure would be a bit higher yet (especially if chess is as popular as having that big magazine in the local convenience store would make it out to be. Yes, it’s a prop to move the plot along, but just even considering how I think this would play in actual 60s America at the time, I suspect even more media attention than she had been getting.) Like there’s the one game that she plays in Mexico City, a tournament that has the top grandmaster in attendance, and on one of the games up the ladder, she plays this Russian boy – you’d think an interesting chess story – the game is played, adjourned, and finishes the next day with absolutely nobody in attendence, nobody watching the game. No sign of even a tournament official.

Also, there’d be a hell of a lot more overt sexism going on. Her rise to the top was pretty smooth. Hell, just see Kasparov’s early comments on Judit Polgar a few decades later.

I know, I know. I should just treat this a bit like magical realism or a fabulist work or something like that and not try to get too into the details. And, as that, it worked enjoyably enough.

Yes, single-elimination games are quite rare at the top level, and at lower levels as well, since the players there typically have paid an entry fee and would object to being sent home after one defeat. There is actually more of that sort of thing today than back then, but even now, the nearest thing would be an “Armageddon game” (where a draw means that Black advances, but on the other hand Black has had to give a time handicap) if a series is tied after the scheduled two or four or eight games.

The climactic game in “Searching for Bobby Fischer” (1993) was dramatized some compared to the real-life game it was based on. In real life, the hero Waitzkin had managed to swindle a draw from a worse position, and won the first-place trophy based on tie-break points (there are various tiebreak systems, but usually it comes down to how each player’s opponents have scored during the tournament). They might actually have milked the drama further by sticking closer to reality, because there would have been numerous other games in the room with an impact on the outcome, and when they were all done, we could have watched close-up, slo-motion footage of the tournament director calculating the tiebreak points on his Texas Instruments device…but they didn’t hire me as the scriptwriter, so that was that.

In the series finale, a character says: “Elizabeth Harmon’s not at all an important player by their standards. The only unusual thing about her, really, is her sex. And even that’s not unique in Russia. There’s Nona Gaprindashvili, but she’s the female world champion and has never faced men.”

“This is my entire life that has been crossed out, as though it is not important,” she told the New York Times. 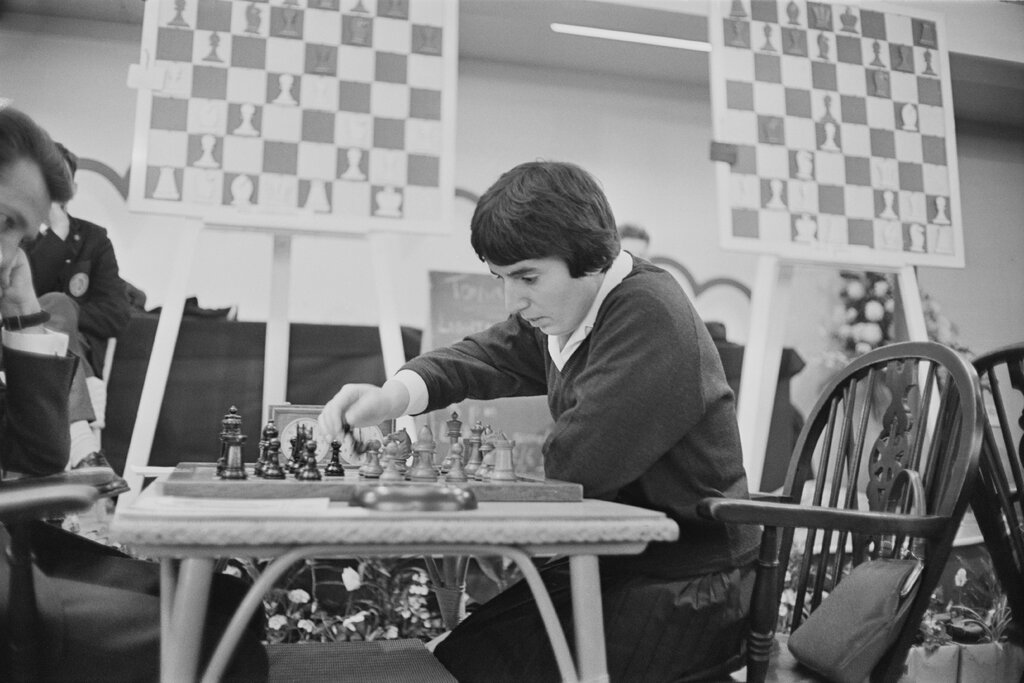 A Chess Pioneer Sues, Saying She Was Slighted in ‘The Queen’s Gambit’

Nona Gaprindashvili, a history-making chess champion, sued Netflix after a line in the series mentioned her by name and said she had “never faced men.” She had, often.

“They were trying to do this fictional character who was blazing the trail for other women, when in reality I had already blazed the trail and inspired generations,” Ms. Gaprindashvili said in a recent video interview arranged by her lawyers, speaking in Georgian, which was translated to English by her grandson. “That’s the irony.”

Okay, she’s got a point. Sounds like the producers/writers absolutely screwed the pooch on that one.

So what? Elizabeth Harmon didn’t exist in reality. This is a fictional story set in an alternative universe, perhaps one in which Nona Gaprindashvili didn’t play against men.

So what? Elizabeth Harmon didn’t exist in reality. This is a fictional story set in an alternative universe, perhaps one in which Nona Gaprindashvili didn’t play against men.-

So what is that it slandered her and hurt her hard-won reputation. She’s a real person regardless of whether Elizabeth Harmon was.

This is a fictional story set in an alternative universe, perhaps one in which Nona Gaprindashvili didn’t play against men.

Yeah, it is a fictional show but she is a real person who is still alive and who got a genuine backhanded diss from the show just to up drama slightly. Not to mention they got her ethnicity wrong. All that research on chess games and they kinda muffed the background on a real life pioneer. If I were her I’d be pretty pissed off as well.

This is a bit of a peeve of mine. I hate it when ‘fiction’ based on real stuff gets it wrong and the creators claim the fact that it is fiction negates criticism. If they wanted fiction they should have used a fictional name.

The worst is probably Spotlight where they make a real person sound like he was covering up the pedo stuff when in reality he didn’t do anything like that. And they had a fictional ‘bad guy’ sitting right next to him that could have said the offensive stuff instead.

At the very least, the suit brings the truth out in the open. I loved queens gambit, and I’m happy to know the facts.

Sloppy by the show’s writers, and regrettable, but hardly actionable IMHO. They didn’t falsely say she did something terrible; they just didn’t give historical credit where credit is due.

The suit may win her that acknowledgment, even if it doesn’t win her money. I bet she cares more about the court of public opinion anyway.