Did I miss the thread on this? Has anyone seen this gem on Netflix? I think it was a fantastic watch. my wife and I ended up binge watching the last four episodes in one sitting.

It was outstanding. My wife & I both loved it. I was a chess player though never close to Master’s level. I thought it was really well done.

I enjoyed it too, pity it is not a true story. Some jumps in the narrative were a bit abrupt, but it kept a nice human touch, just short of too sentimental. I thought the casting was great.

Outstanding. I know nothing about chess, but the actors hit this out of the park. I limited myself to 2 episodes a day, but it is binge worthy.

My wife watched it, so the only thing that caught my attention was the music. Some good songs in there.

I’m halfway through, stretching it out for as long as possible. I’m a chess fan (but terrible player) and it is just wonderful to watch.

They did a good job in most episodes of using good music that isn’t still well remembered today. That impressed me and avoid a minorly annoying Trope of “Only All the Hits”.

I don’t know. There was just a predictability to the main narrative that permeated throughout. It was very competently made but there was nothing that didn’t just follow the standard underdog sports narrative: from her first match with Benny onwards, it went almost exactly like clockwork.

Watched the first ep yesterday and enjoyed it. Well done, and not quite like anything else we’d seen lately. Looking forward to more.

I’m a retired chess teacher and read the book a long time ago.
I enjoyed it and Walter Tevis did a good job researching chess.
I shall look forward to watching the series.

Another well-researched chess novel is Nabokov’s ‘The Defence’.
It’s a bit gloomy, but gives a fair idea of the pressures of international chess.

I suppose that’s somewhat true. After all, it was about a chess prodigy. It has to end with a Harmon winning against the Russians. However I’d say they the real ending was Harmon realizing she could play chess for enjoyment, and knowing who her friends are.

I enjoyed it a lot. I got weepy during the scene in the basement towards the end. I liked that she had a sister-friend in Jolene.

Enjoyed it immensely, really well made. I felt that they did an excellent job of presenting the chess and drama of the matches without requiring me (the audience) to understand exactly what was happening on the board. I am assuming that all of the chess was correct for a knowledgeable viewer, otherwise we would have heard an uproar in social media. They built just the right level of dramatic tension, without overdoing it. That is quite an accomplishment, as far as film-making.

I thought it was the best show I’ve seen in recent times. It’s such a delightfully (and deliberately) un-modern story: nobody really does that tired, old ‘hero overcomes their faults to ultimately triumph’-thing anymore. Instead, modern protagonists are routinely undone by their flaws, live—perhaps like most of us—in a constant state of low-level angst, succumb to their inner demons, and are then kicked when they’re down in a bid for ‘gritty realism’. And I’ve frankly grown a bit tired of that.

Not that everything’s roses in this story—there are flaws and challenges aplenty, but they’re used as means for growth, rather than just being the portent of ultimate doom hanging over the characters from the start. I don’t think, however, that this is really a ‘underdog sports’-type of story: it’s a story about an orphan finding her place in the world, with chess just being a means of finding meaning—and even that only upon being reminded by her childhood friend, Jolene, that her worth doesn’t come from her excellence at chess.

In the end, Beth isn’t a ‘chosen one’ kind of hero—superior to the rabble because of her innate talents—but somebody who must struggle with finding her path in life despite these talents.

I suppose that’s somewhat true. After all, it was about a chess prodigy. It has to end with a Harmon winning against the Russians. However I’d say they the real ending was Harmon realizing she could play chess for enjoyment, and knowing who her friends are.

I think that’s right. Beth’s character arc doesn’t end upon beating Borgov; it comes to a close when she sits down with the amateur players in the park, just to play, without having anything beyond that to gain from it. It’s a nod to the fact that what we do can only ever be a means to being who we are, and if we always orient our striving towards some immediate goal—whether that’s winning at chess or making more money—we’ll always miss out on that. If you win the rat race, you’re still just a rat.

Also, I liked that they had somewhat detailed discussions about money throughout the storyline. It wasn’t the standard, “Now she wins and is always rich! Ta da!”, hand waving that is all too common in entertainment.

That helped ground it in a relatable reality, to me anyway.

This guy does videos on classic chess games. Very interesting. 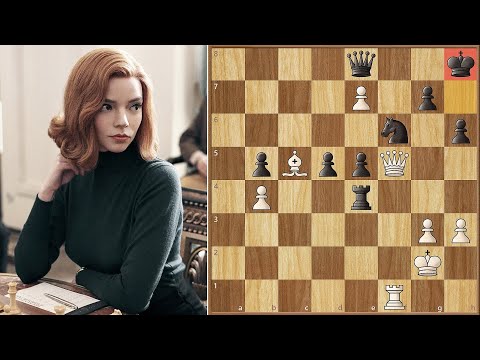 My husband and i watched the first episode last night. It was really good. But that last scene was rough. I literally averted my eyes.

Some good songs in there.

I was watching it with subtitles, so each song title was identified – with the exception of Classical Gas! How could they have missed that? It showed up as something like “guitar music plays.”

I binged it over the weekend. Amazing how something with completely uninteresting (to me) subject matter can be so entertaining. I was a bit distracted by the actor who plays Benny, as I immediately thought “he looks just like Sam from Love, Actually” (it turns out it is him).

Really good show. Perhaps things tied up a little too neatly in the end, but that’s OK - I like (not sure how to hide spoilers).

Didn’t care for the casting of the kid from Love Actually. To slight and pretty to accept as the supposed tough guy. But that was a minor quibble.