Question about Frosty the Snowman

Incidentally, ever read Frank Frazetta’s Snowman comic? Bonkers stuff, and an impressive debut for a pop artist. In many respects, it feels like the precursor to Osamu Tezuka’s work–scrappy minimalisticly style hero set against an incongruously sinister and finely detailed antagonist. Too bad it didn’t go beyond one issue

iirc, and it has been many a moon since I’ve seen the Frosty the Snowman TV Special, he says “happy birthday” because the magic top hat is the hat of a magician performing tricks at a child’s birthday party. The magician is in the middle of a trick using the hat when the wind somehow liberates said hat from the magician mid-trick and yadda yadda and there you have it. The “Happy Birthday” is the magical stutter of “majika interruptus”

No, the magician was performing for a last-day-of-school-before-Christmas-break classroom party. And bombing. That’s why he threw away the hat.

ok, well, like I said, its been a while since I last saw the show.

Well I found the Gene Autrey song and the lyrics and there is no “Happy Birthday” at all: 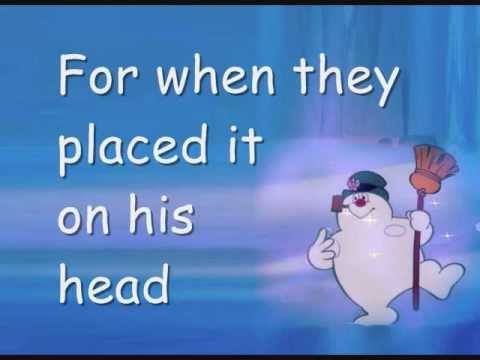 Well I found the Gene Autrey song and the lyrics and there is no “Happy Birthday” at all:

That’s because I’m talking about the TV special where he says “Happy birthday!” and not the song, where he doesn’t.

I’ve always wondered why he needs to wear a hat and scarf. To keep him cold in the sun?

Well, we can’t have him running around naked, can we?

For the same reason men and women wear earrings. It looks cool

Frosty is just an ordinary snowman without the hat. It’s magic.

The scarf is just for looks. Or decency. Or whatever.

IIRC, in the written story, after Frosty melts, a kind policeman tells the children that next winter when they make another snowman and put the hat on it, Frosty will be back.