I just finished watching this show on OMNI. It has virtually no narration, and it doesn’t give a list of ingredients. You can only follow the visuals.

What I want to know is: What the hell is the green mush she puts into the stew, and what are those little white specks? Mashed okra and black-eyed peas? 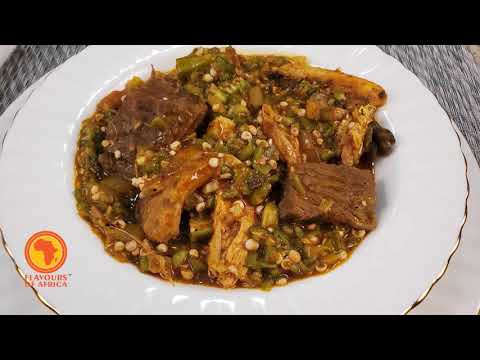 I think the green stuff is chopped fresh okra and the white specks are seeds and pieces of membrane. I don’t like gumbo with okra, it’s slimy. Not sure how the dried okra thickener comes out, filé powder is a traditional thickener that I prefer.

I was wondering about the powders she adds later (to both recipes, I think). I assume one is a spice blend, while the other is probably filé. What would be in the spice blend, I don’t know. Something like Cajun seasoning, maybe?

Shrimp is the usual protein source in my gumbo recipes, not TVs.

Tofu should work ok at need, though.

The first “Africana” recipe uses beef and mushrooms, which is interesting. The second “Americana” uses sausage (probably andouille), chicken, fish, lobster, and shrimp. (And mushrooms too.)

I think the white powder she adds in the first recipe could simply be salt, but possibly some filé, which may or may not be the real stuff. In the second recipe I think the grayish stuff she stirs in may be the dried okra.

Creole seasoning more likely, though there’s usually not much difference.