The missus and I will be taking a jaunt up to Portland and Cannon Beach soon, and I’m looking for restaurant recommendations. We watched a show on the travel channel a couple of months ago that talked about Tasty & Sons, Pok Pok, Whiskey Soda Lounge, Le Pigeon, and food trucks.

Any thoughts on those place, and any recommendations of your own?

You may want to ask a mod to amend the title so it’s clear you’re asking about Portland, Oregon. There’s no Cannon Beach in Maine that I could find, but not everyone may know that.

‘Newmans at 988’ in Cannon Beach had an amazing looking menu, but it was out of our price range when we last visited. About a hundred miles and 2.5 hours south in Newport there’s a harborside spot called Saffron Salmon that is worth the drive, IMHO. I can’t wait to get back there.

In Portland, I like The Rheinlander. It’s German, so not for everybody, but they have the best fondue in the entire world.

I had a great lunch at Kells Irish Pub, a few blocks from Saturday Market.

There are a ton of great places in Portland. Can you narrow down your tastes a bit? Any cuisines? Price range? Loud and lots of energy, or quiet and intimate?

A few favorites off the top of my head: Ava Gene’s for a splurge, Lardo for artery-clogging sandwiches, Por Que No for cheap and inauthentic but delicious tacos, Ox for meat-lover paradise.

The ones you mentioned:

Le Pigeon is good, but portions are small and pricy.

Jade, in the suburb of Sellwood, has good Vietnamese.

If you like sushi, Saburo’s in Moreland is supposed to be the best, but the line is very long.

Lots of good breakfast places, like Pine State Biscuits (two locations), which has fried chicken, biscuits and gravy, fresh hash browns and other good stuff. There’s also Sanborn’s in the Brooklyn neighborhood, which does German pancakes and a good biscuits and gravy, along with the usual fare. I’ve heard good things about Screen Door (chicken and waffles), but haven’t been there yet.

Apizza Sholls is consistently rated the best pizza in the city and recently had national recognition as #3 in the nation. Haven’t tried it yet.

I concur with Saffron Salmon in Newport; we go there every year when we attend the jazz festival. Avoid Mo’s Clam Chowder. It used to be the best you ever ate; now it’s just ordinary, at best.

For you Newport guys, Local Ocean is worth a visit (I prefer it to Saffron Salmon). Seafood comes right off the boats at the dock next door.

You are going to need to define what type of food you are looking for. Portland has so many great places from the brew-pubs to fine dining.

If you are interested in seafood when you go to Cannon Beach, go to Mo’s. 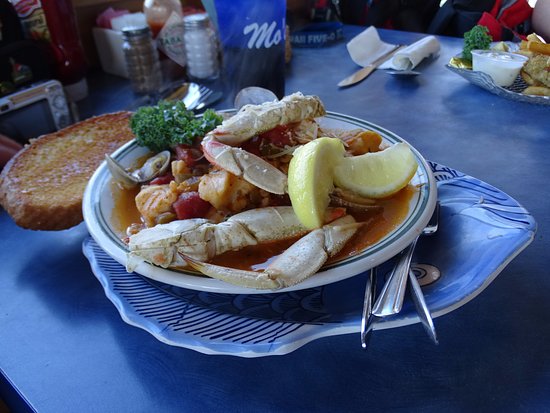 The Lumberyard is good if you like a casual type environment.

Cannon Beach is a very touristy oriented town. Expect the whole town to be a tourist boutique type place. Not that that is bad, it is just what it is.

Be sure that you have a place reserved before driving out. If you have some walking time or interest go up Ecola State Park and keep on going to Indian Beach. It is worth just going a little farther. It is the final destination of the Lewis and Clark trail, where they traded for some dead whale stuff.

For you Newport guys, Local Ocean is worth a visit (I prefer it to Saffron Salmon). Seafood comes right off the boats at the dock next door.

Now if we are going down the coast we should stop at Kyllo’s in Lincoln city. Expect to wait in line at any time of day.

Or the Pier 101 which is just as good or better, and has a kid friendly side and the best Bloody Mary’s. I think there is a menu in this link.

I agree with Local Ocean in Newport, a bit expensive though.

In Portland (specifically, Beaverton) Yuzu is a really good restaurant for Ramen. I haven’t tried their other stuff but their Ramen is absolutely amazing. Note that they don’t actually have a sign in the mini-mall they’re in, so you have to park in the mini-mall a GPS or map leads you too and then find the nondescript door tucked into the corner. Despite being tucked away it tends to be fairly packed, though.

Andinas for novoperuvian is really good. Can be crowded, though, and is a bit spendy.

You may want to ask a mod to amend the title so it’s clear you’re asking about Portland, Oregon. There’s no Cannon Beach in Maine that I could find, but not everyone may know that.

Thread title modified to include “Oregon” at the request of the OP.

You are going to need to define what type of food you are looking for. Portland has so many great places from the brew-pubs to fine dining.

We’re pretty open, but will probably stay away from super high-end places. We love a good brew-pub. Those were one of our favorite aspects of our trip to Wales.

Hmm… we love sushi, thai and seafood. Neopolitan pizza. Hell, we just love food. My wife tends to lean vegetarian, but it’s not a philosophical thing so she’s not strict about it.

No chains, or at least no national chains we can get in Dallas.

I don’t make it down to Portland very often, and I’ve not done much in the way of fine dining down there, but there are a few local eateries I can recommend;

You’re much better off going to Killer Burger (several locations). Bigger burger, comes with fresh bacon and cheese and fries.

I mentioned Saburo’s for sushi, but I haven’t been there. But I HAVE been to Zen Bu in Sellwood, which is a sushi food cart. These guys have been in business for about five years and they are killing it with turn-away business.

By the way, most restaurants are closed on Mondays.

Newmans looked great, pricey but didn’t try. Wine Bar & Sweet Basil’s Cafe were our favorite - north end of town, to left of Laurel’s Wine Shop. Filled up quickly and is not fast - but great food.

Driftwood was popular, seemed to be in institution but, meh…

While my wife shopped I hung out at Cheri’s & the Hardware Store.

Avoid Pig 'n Pancake - Grilll & Scoop had better breakfast. Lumberyard had such bad service we walked out after waiting thirty minutes for a beer & wine.

Andinas is probably my favorite restaurant of the ones listed.

Another favorite not mentioned yet: Castagna

For food at brewpubs in Portland, Ecliptic is one of the few that focuses on higher end food. Ex Novo is my current favorite; it doesn’t have as fancy a menu, but their food is very good and the space is great. Sasquatch in the Southwest has the best brewpub food in Portland. Deschutes in the Pearl is a beautiful place but the food is so-so. Stick with a burger there.

I have been gone so long that I so not know what to recommend. So, when I called some friends & family earlier today I asked about my old favorites as far as restaurants go. Mo’s in Cannon Beach, Lincoln city, & Newport are still serving fine food in a timely manner. Living in the middle of the country near the Rockies, I can only get canned clam chowder. Mo’s chowder is way better than any canned chowder. I always get a bowl.

All of the Portland establishments that I used to haunt are either gone, or none of my people have been to them lately.

If you are going to Cannon Beach via Hwy 26, Camp 18 in Elsie Oregon is good. It is a log building and looks like an old lumber mill/museum. There is lots of old logging & mining equipment to look at & play on, in & around the place. Most of this is surrounding the parking lot & out back behind the building. If you are hungry, this is the place to go. If you are not hugely hungry, they have smaller portions for you to enjoy. It is a family style restaurant & the wait, IME, has never been long. It is at mile post 18 on Hwy 26, hence the name, Camp 18.

When I lived in Cannon Beach, the supply of restaurants was very limited. I found that by going to nearby Seaside, nine miles away, I easily tripled my choices as far as eating establishments go. Cannon Beach is now very much a tourist town. That may be good or bad depending on your outlook. I try to avoid tourist towns at all costs, but that is just me. Oh, it is about 22 miles from Cannon beach +/or seaside.

I have it on good authority, that The Lumberyard in Cannon Beach is good. I will try them on my next trip to the beach.

We’re pretty open, but will probably stay away from super high-end places. We love a good brew-pub. Those were one of our favorite aspects of our trip to Wales.

Hmm… we love sushi, thai and seafood. Neopolitan pizza. Hell, we just love food. My wife tends to lean vegetarian, but it’s not a philosophical thing so she’s not strict about it.

No chains, or at least no national chains we can get in Dallas.

McMenamins is a local chain of brew-pubs you’ll probably run across somewhere during your stay in Portland. The main one is in the suburb Troutdale.

For breakfast in Cannon Beach, you may try Pig 'N Pancake, another local chain.