They don’t but an entirely different set of androids can.

Hmm. I like the description, “A race of humanlike robots which are mostly female in model variety.”

Come on, they’re fembots. Just admit it ChJees, you made fembots for RimWorld.

Well, Android Tiers androids won’t spawn as female without an additional mod. ChJees may have simply wanted to give equal time to the opposite sex.

Great. One of my mods has started preventing my pawns from doing anything; can’t even right click to tell them to do something. Now to find out which…

Are all your mods version 1.3 compatible? I know there was a significant (several weeks) lag before the majority of my ~10 mods got updated, and one still hasn’t (No Sieges).

Are all your mods version 1.3 compatible?

I did try 1.3 on my desktop but couldn’t even generate a planet.

I had some ideas what could be causing this but the problem persisted whenever I disabled those mods.

So I created a spreadsheet listing all the active mods and alphabetized it. Mods are being enabled in groups, making sure any dependencies are loaded at the top of the list, and I have a new default colony to see if anything recently enabled has disabled rightclicking.

Well, I found one mod conflict. Looking for more…

Took a chance on this medical mod being the only problem; uninstalled it and my pawns started working again.

No idea where the conflict is but this mod to have pawns perform work even though they’re not assigned to that job, which I enabled in my test game and hadn’t used before, is what identified a conflict upon right-click. After that, it was a matter of enabling mods in smaller groups until I found the culprit.

I try not to add mods unless I really really want them, and they solve an annoyance; not for a philosophical reason, just for stability.

The two that I absolutely must have:
silent doors (the constant door sounds starting mid-game drove me nuts)
wall lights (it feels so much more organized and tidy)

Not to yuck your yum, but there are some truly stupendous (and very stable) mods out there.

At the top of the list are Oskar Potocki’s Vanilla Expanded mods. He’s put out a staggering number of mods that all retain the aesthetic and balance of the base game. He should be on Ludeon’s payroll by now, but at least he’s making money from his Patreon. The design philosophy is more or less… “what if the base game was way more base game?”

I also love the Hospitality mod - it’s cool building little hotel sections for visitors. Hospitality can be unstable, though.

Some really excellent quality-of-life mods that are confusing because they should be in the base game by now:

I try not to add mods unless I really really want them, and they solve an annoyance; not for a philosophical reason, just for stability.

Understandable. Having too many mods installed will cause performances issues, IME, and tracking down just one that won’t play nicely takes a long time. As noted above, I had to pare down my active mods to improve performance. I actually forgot about doing that and reenabled Project Iztal and a few others, only to be reminded why I stopped using them when my game froze with a bunch of insect corpses on the screen.

At the top of the list are Oskar Potocki’s Vanilla Expanded mods.

I think I have all of those plus Helixien’s ReGrowth flora & fauna packs. Dubwise is another great modder; his Mint Minimap is indispensible for quickly finding trouble spots and Bad Hygiene is a great companion for Hospitality. I opted for using the lite version of Bad Hygiene, having grown tired of plotting out waste pipes; the Lite version for 1.3 evidently has its own file rather than being an option

Home Mover (1.2 & unofficially 1.3) are great for quickly setting up a new colony, especially with Misc. MapGenerator and associated mods.

Medical Training is great for body disposal while also giving your pawns medical experience. Force Do Job will come in handy for this in particular.

Research Pal is a must-have when there are so many mods that the tabs on the Research panel are illegible. The Pal – an update of Fluffy’s Research Tree which generates the tree upon loading the game – does away with tabs. Or you could have your pawns choose what to research instead.

Another good mod to use when you have a whole bunch of mods is RimThemes due to the fact that it allows the loading screen to show exactly what it’s doing. No additional theme required.

I opted for using the lite version of Bad Hygiene, having grown tired of plotting out waste pipes; the Lite version for 1.3 evidently has its own file rather than being an option

One drawback to the Lite version: it does not have the ability to build air conditioned rooms or walk-in freezers away from exterior walls. There are other ways to build walk-in freezers, though; Utility Columns, for example

Thanks, folks - I will check some of those out (I already use RimFridge, but it isn’t critical for me).

I really should reduce the number of active mods to just the ones I use the most.

Looks like I’ll stick with 1.2 for a bit longer; my survivalist compounds simply wouldn’t be the same without Chicken Plucker’s Military Furniture*; the 1.3 version by Red Horse2 isn’t finished yet.


*Folding cot beds are part of those pawns’ standard equipment.

Welp, something borked my saves again. Seems I can’t get much more than a year into a colony before something renders it unplayable.

Fortunately, I have 1.3 on my tablet, making compatible mods easy to identify. I’ll start my paring down with those.

If you have Hospitality and modded factions, you need Real Faction Guest so the guests from mods don’t have generic appearances.

Sometimes Raids Go Wrong is fun. The description says it might not be compatible with Vanilla Expanded, which could explain why I’ve not seen the first result.

I found another mod which was causing a small problem. Materials+ (aka Atlas’ Materials) inexplicably converted all vanilla ruins into adobe construction. IOW, install that mod and all of the structures seen here would be adobe: 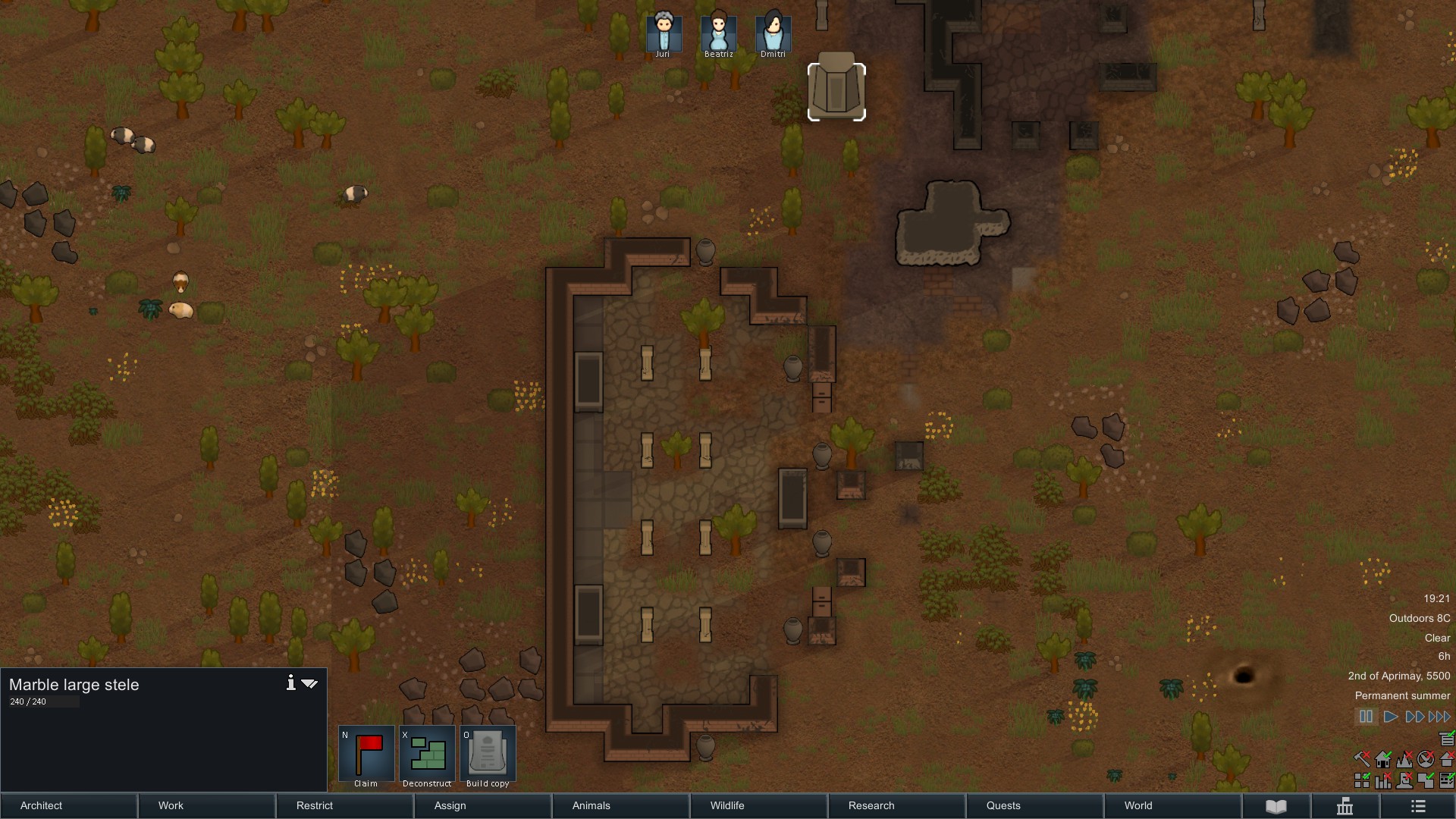 
ETA: Somebody called Ogliss took a cue from Starbound and [created a Perfectly Generic Item(](https://steamcommunity.com/sharedfiles/filedetails/?id=2169353373)so mods can be safely removed without breaking saves. Strangely, I’ve seen some Perfectly Generic floors in ruins upon starting new colonies without Materials+ being installed.
Skywatcher September 14, 2021, 8:01pm #101