The man within R2-D2 has become one with the Force. 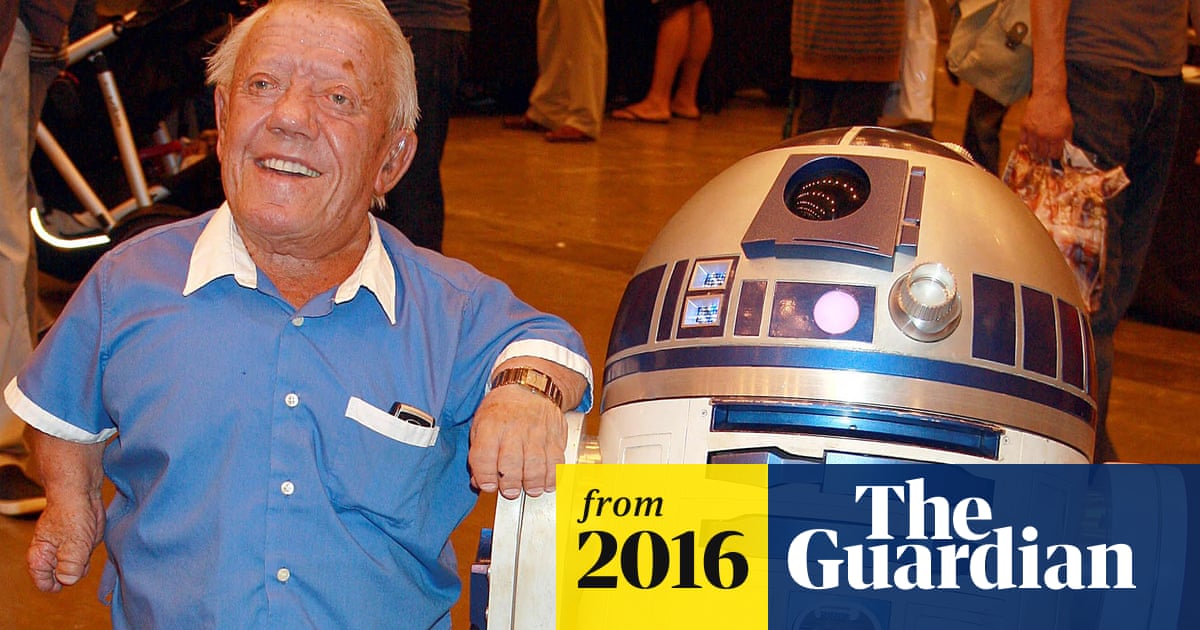 The 3ft 8in actor, who starred in six Star Wars films as well as Time Bandits and Flash Gordon, was 81

Damn. He didn’t even get to see Episode IX. Hope all his shots were mostly done for Ep. XIII (assuming he was performing the part).

May his epitaph read:

I hate to say this, because the man is a legend and awesome as hell, but I’m guessing Peter Mayhew isn’t far behind.

Damn. He didn’t even get to see Episode IX. Hope all his shots were mostly done for Ep. XIII (assuming he was performing the part).

He’s credited as “R2D2 Consultant” in the most recent films, so that’s probably just a nice gesture on the filmmakers part.

He’s credited as “R2D2 Consultant” in the most recent films, so that’s probably just a nice gesture on the filmmakers part.

Yeah, in the last movie R2D2 was “more machine than man”

but righteous and good. We are getting to the level of seeing real droids in the movies. 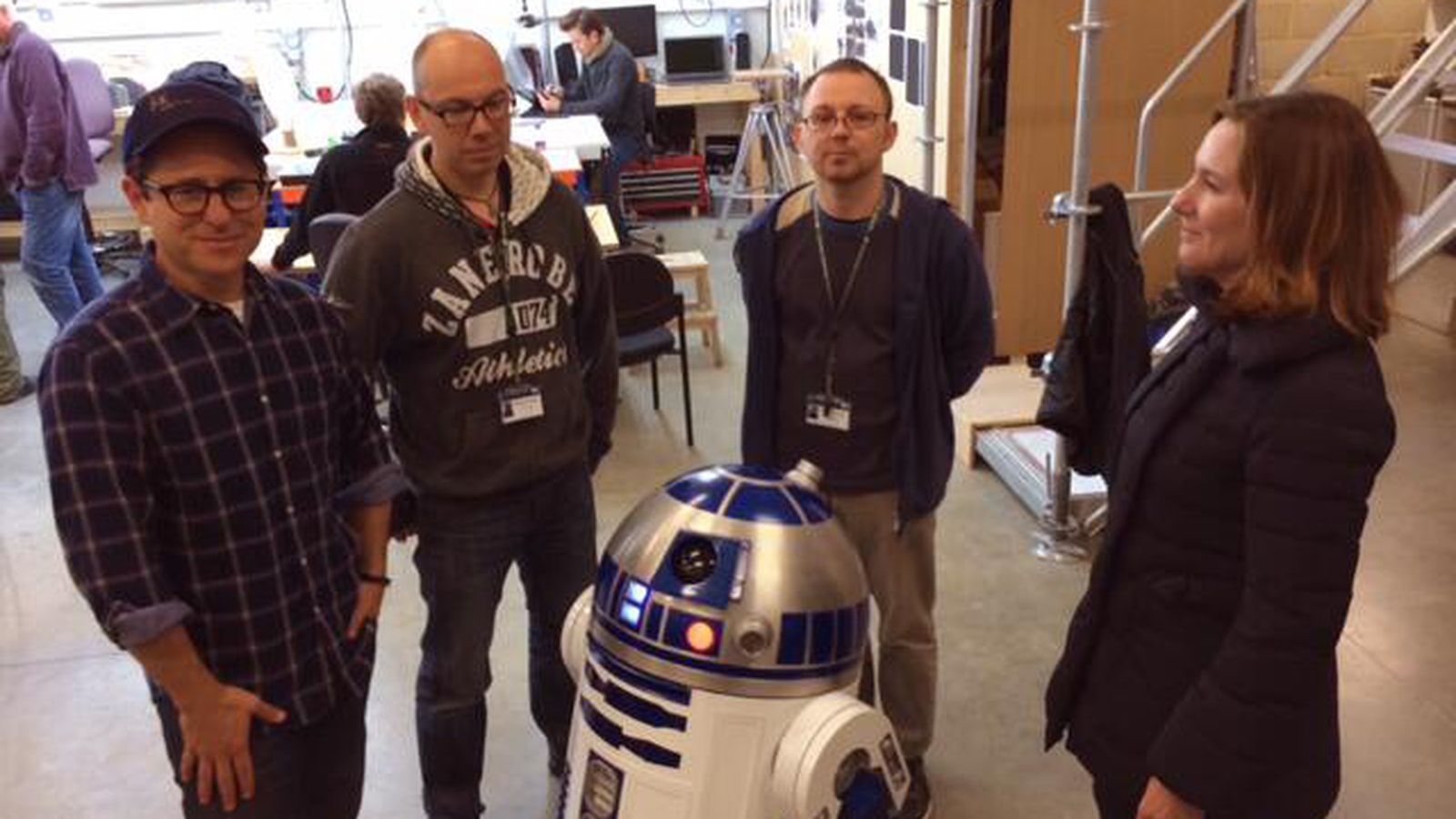 J.J. Abrams and Kathleen Kennedy pose with R2-D2 builders Lee Towersey and Oliver Steeples. Lucasfilm has brought on a pair of Star Wars fans and enthusiast droid builders to create R2-D2 for a...

Mark Hamill said “he was the droid I was looking for”

Kenny Baker, the Actor Who Brought R2-D2 to Life, Passes Away | StarWars.com

Remembering the fan-favorite actor who played one of the saga's most iconic characters.

Time Bandits was just on TCM this afternoon.

I’m probably going to get slammed for saying this but let me make clear; I have nothing at all against Kenny Baker. I also know next to nothing about this subject.

But I simply don’t understand. R2D2 is a non-humanoid box. He (it, whatever) has no human features and speaks in beeps. Its actions (such as they are) are presumably motor controlled. So (a) why was there even anyone inside? and (b) even assuming R2D2 wasn’t remote controlled and was controlled by an internal operator, why would you have an actor inside since the skills involved would just be operating the movement servos?

Again, not trying to diss the guy, I’m sure he was great and did a good job, but I just don’t understand.

I think there were three R2D2 “robots” used in the original Star Wars. One was fully robotic. You can tell which one that is because all it can do is roll around on three wheels and rotate its head. The head rotation is a bit slow. Remember, this is 1970s era technology here.

Any time R2D2 is standing on 2 legs with the middle wheel retracted, that’s Kenny Baker. When R2D2 plays the Princess Leia holotape, he leans forward a bit. Later in the scene he straightens up and leans back and forth a bit. It’s not much movement, but the real robot couldn’t do any of that. There are other scenes where R2D2 shakes a bit and does some other slightly animated things. These were far beyond the robot R2D2’s capabilities.

I can’t remember what the third R2D2 was used for.

This is the robot (except at the end). Note that it doesn’t do much more than roll, and none of its movements are very fast, even when turning its head. The middle wheel is out. The robot could not retract the middle wheel and could not stand up straight. That might be the third R2D2 that takes a header at the end of the scene.

This is Kenny Baker. You can tell because R2D2 is standing up straight. The robot couldn’t do that. Notice also that R2D2 leans forward when he plays the message. He leans back and forth a bit at the end of the scene, which again the robot wasn’t capable of doing.
At 2:23 in this scene, R2D2 rocks back and forth a bit. Definitely Kenny. Throughout the scene, R2D2 rocks back and forth and leans forward and backward. He’s also standing on two legs. The robot could do none of these things.
I couldn’t find a clip on youtube but I know there’s one scene where R2D2 shakes side to side like he’s scared, which was definitely way more than the robot could handle.

Some of it is pretty subtle, but basically if R2D2 is doing anything other than just rolling on three wheels, it’s Kenny.

Thanks I’d forgotten about the little rocking movements.

I was poking around a bit more on youtube (just because I’ve always liked R2D2) and I found out that in the middle of that Jawa scene there’s actually a cut which is Kenny. At about the 18 or 19 second mark in the first clip, R2D2 stops and looks around. His head is moving much faster there, and if you look very closely you can see Kenny’s legs poking out through the bottom of R2D2.

The Oakland A’s had a Star Wars themed fireworks show after tonight’s game. They announced Kenny Baker’s death just before the show. An odd coincidence.

I can’t remember what the third R2D2 was used for.

It’s for whenever a door opens and an arm or tool comes out.

…and if you look very closely you can see Kenny’s legs poking out through the bottom of R2D2.

Here’s an image with the tubes for Kenny’s legs to slip into R2’s feet. And another. Most of the time if Kenny is inside he’s filmed with the feet cropped out, but there’s a shot (when they all arrive at Docking Bay 94) where you can see Artoo actually walking down some stairs.

Here’s one where it is not Kenny inside.

I also recall a kind of bizarre two second throw away clip from a new hope I think around the time Han talks to Jabba and R2D2 is going down some stairs I think to the little hangar bay the Millennium Falcon is in, and its probably a scene where Kenny is inside walking with his real feet or something, but I swear it almost looks like a prop with a large plank of wood or something attached to the back of it moving it around, I just remember because of the fact of it being stairs it made the movement just look really unrealistic and awkward.

I thought it was pretty cool that Artoo could walk down stairs in the original trilogy. I wondered why, in the later films, they never showed Artoo using particular skill again. Now I know it was Kenny doing the walking!

I feel bad for the poor bastard inside BB8.

I feel bad for the poor bastard inside BB8.