“And the award for worst job in the country goes to Crack Whore. Which beat out last year’s winner: Assistant Crack Whore.”
…
He also told a rambling joke about two “midgets” (his word) who hired prostitutes. The story ends up with one of the guys unable to perform, but he hears through the wall that his friend is having his way: “one, two, three, uggh! One, two, three, ugh!”

The next day, when they were commiserating, the first guy complimented the second on his success.

It’s all in the delivery. You had to be there. He wasn’t somebody you could recreate. And he was epically funny.

Hope it doesn’t sound morbid but I bet he had thought up some jokes regarding his cancer and death and such that we’ll never get to hear. You just know they were hysterical.

Comedian Sean Lock, who also died recently of cancer, apparently did. According to his friend and fellow comedian Harry Hill, when asked about what the end-of-life hospice he was in was like, Lock said, “It’s OK. The sex is amazing.”

Jon Lovitz said in a radio interview that Norm was banned from performing at a casino in Biloxi Mississippi. He said Norm was given a list of things he shouldn’t talk about. Norm asked the audience “How many of you don’t want me to talk about X?” Most of the audience agreed he shouldn’t, but about 20 of them consented. He said “This set’s for you then” and gave his bluest and most obscene material. Lovitz said he about died laughing backstage at Norm’s utter gall.

The radio host asked him “So that’s what got him banned?” Lovitz replied, “Oh no, he was caught counting cards.”

There was an episode of The Middle where MacDonald played Brick’s shyster uncle and got him involved in a card counting scheme. I guess the Biloxi incident inspired the script.

It took him a long time to get there, but it was worth it.

I saw Norm at the Just for Laughs around 1992. He stood out then for his hilarious delivery. Comedy radio has been playing his old stuff, and so much of it is brilliant - see his routines on The Origin of the Fantastic Four, Psychologist, Hong Kong Flu Football, Shallow Grave, The Disease of Alcoholism and Battle With Cancer for starters. Ironic.

His book is also very funny, as was his Bob Saget roast where he read all of his insults out of a Dad-style joke book for the entire time (which the other comedians liked much more than the audience did.) “Bob, you have a face like a flower. A cauli-flower.” For an hour. Brilliant. All in the delivery. Bob loved it.

“The Disease of Alcoholism” might be the single funniest comedy bit I’ve ever heard.

Speaking of Bob Saget, I heard a podcast (or some similar audio file) today in which he spoke about Norm. It was quite obvious he had been crying immediately before he started recording and was barely holding it together. They were very close.

Doesn’t necessarily mean the jokes stopped. I’m not a regular watcher of SNL and don’t have an opinion on why he got fired. But it is plausible.

To be honest, I don’t think he wore that well in that format. Probably for the best that it ended.

There was an article in AV Club about Norm not doing anti comedy, and of course he did anti comedy. Frank Stallone, Hasselhoff, Simpson, staring into the camera 15 seconds after a joke. That was all anti comedy. Norm copped some attitude from Letterman, was a better overall performer than Letterman, funnier. But if you want to make it long term in that sort of role, you have to be able to stop, to defuse the tension once in a while. Letterman could have the tension and stop, Norm couldn’t, which is why I can see him wearing out his welcome. Honestly, I get it, but sometimes running those gags into the ground becomes genuinely not funny for some of us, then it just gets to irritation mode, and like I said, Norm wasn’t a defuser. He was best in limited doses.

A lot of ‘inside baseball’ type anecdotes, such as the story that the famous ‘Moth’ bit came about because Norm was only supposed to do one segment that show, but there was time to fill so Norm had to do a second 7 minute segment with no preparation. So he takes a dumb joke that Colin Quinn told him, and put his own unique Russian novel spin on it, turning it into a classic bit.

Look, the way I see it is some brilliant comedians swing for the fences. They don’t go for the ground rule double, playing it safe. Sometimes they hit it out of the park, and sometimes they strike out badly. Norm at his best is funnier than anyone (my above post gives my names to his best pieces but are probably called something else). I did not see his movies or much of his work on SNL. He complained a bit about losing a lot of the creative control on his show.

The edgier comedians fall on their face a lot - some taking more care than others to keep these experiments private. I am always amazed at the enormous percentage of high level comedians who are Jewish - many of whom you might not thus assume. Of course, I was also (pleasantly) amazed to learn Jeff Dunham was the most popular comedian in the Moddle East for many years.

And this one: “The new Kenny G Christmas album is out. Happy Birthday, Jesus - hope you like CRAP!!!

Norm could tell old, bad jokes and they would come across as fresh and clever. Example being the one about ordering a Polish sausage in a hardware store.

He was one of, if not THE first to do Covid jokes right smack in the beginning of the pandemic when people were the most afraid. And he pulled it off.

”I was going to do something about Carona Virus, but On the way here I got really ill”

Norm reading his “congratulations” card to Conan for getting the Tonight Show was great. Of course, he read it to him after Conan was fired.

“I know for you miserable failure is never an option.”

I heard an old routine with SNL alumnus Jim Breuer. He thought Norm was the funniest guy there.

Norm reading his “congratulations” card to Conan for getting the Tonight Show was great. Of course, he read it to him after Conan was fired.

“I know for you miserable failure is never an option.”

I wasn’t really familiar with Mr. MacDonald’s work. I vaguely recall seeing him do Weekend Update but doubt I saw it often as that was after I couldn’t afford agave up TV.

Anyway, thanks to y’all and YouTube, I’ve watched a bunch of his stuff now and seriously, I mean it: thank you.

I agree with the comment upthread about him doing anti-comedy. 100%. The similarities to Andy Kaufman, for instance, kept making me giggle, specifically the fact that whenever I see him, to me, he’s obviously performing. All the time. I didn’t learn anything about Norm MacDonald the person at all because he’s always in character when he’s, well, performing. He’s not there to be loved; he’s there to make people laugh. Even so, I loved his mannerisms, his not-quite relaxed way of trying to be relaxed and his ability to just plow thru everything (other people’s voices, his own inanity, the audience, etc.), seemingly oblivious to the reactions happening around him.

His jokes are hilarious. The moth joke (and several others) laid me out, sent me right out of my chair so I could roll around on the floor. Just an incredible bit with all the embellishments and misdirection that you know is misdirection but you listen to it all anyway because it’s so absurd that it borders on surreal and you just have to find out where he’s going with this… and then, of course, he goes there.

Obviously a comedian’s comedian, too. I have no doubt that other comedians were fascinated by him and the material he generated, and frustrated that it would be so very, very hard to steal.

Norm was interested in making audiences laugh. He figured laughter was genuine since one can’t really control it. He had little use for audiences agreeing with him. A Canadian paper had an interview with his brother. The interviewer noted that even in his books and sketches the personal stuff was fake. His brother said Norm did not feel that he owed his audiences the truth- only to make them laugh.

But the truth is interesting. He had a lifelong interest in Christianity and Russian literature. He had cancer for eight years but few knew, and amazingly wrote his Battle With Cancer bit when he actually had it. 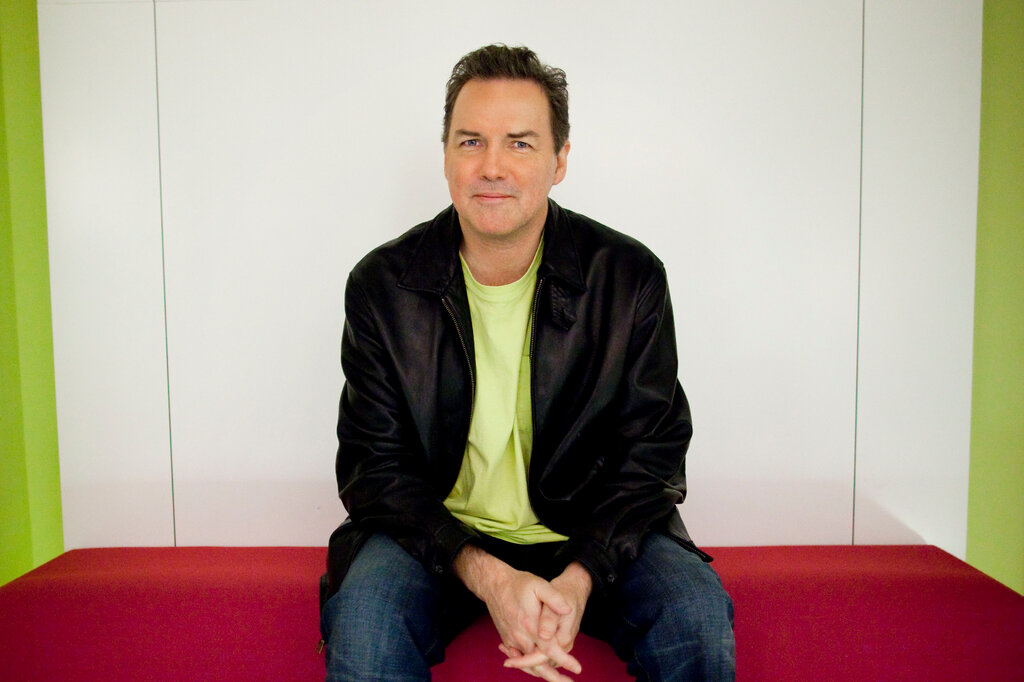 His faith is key to understanding his comic legacy.

I’ll have to reread his book. He really was a brilliant comic at his best.

His brother said Norm did not feel that he owed his audiences the truth- only to make them laugh.

MacDonald did sometimes get serious in interviews when discussing the science of comedy. A trend he genuinely hated was confessional comedy, the kind of stuff where Bo Burnham or Hannah Gadsby gets up and does a routine on “I’m lonely” or “I’m depressed” or what have you. He found it incredibly pointless, figuring, well, everyone suffers, so what are you saying that’s interesting? His line was, IIRC, “now revealing everything is art; I think concealing everything is art.”

Aye; I picked up on that right away (I mean: it’s obvious as fuck, right?) and loved it. When on stage or in front of the mic/camera, he was The Performer. With the same good-natured-but-wtf bull-headedness that he told his stories and jokes, too. It’s a meta-anti-comedy performance/act that is just awesome to behold.

He found it incredibly pointless, figuring, well, everyone suffers, so what are you saying that’s interesting?

It’s interesting in the fact that since everyone has problems, the audience can empathize with the comic and find humor and comfort in someone else going through the same shit. Or they can feel better about their lives not being the giant shitshow the comic’s is, and their problems seem more manageable in relation. It’s just a totally different flavor of comedy than MacDonald’s work (which I love, partly because it is a stark contrast with the confessional flavor of comedians.)

It’s interesting in the fact that since everyone has problems, the audience can empathize with the comic and find humor and comfort in someone else going through the same shit.

MacDonald’s point was that simply stating “I am depressed” isn’t an artistic accomplishment, or else everyone talking to their therapist is engaging in art. He felt that art was in concealing that behind the art - jokes, in his case - so the message was delivered in a more nuanced, creative and interesting way.