Every once in a while, I post a comment, and later when I come back to the thread, my comment is there - but also there’s a saved draft identical to the comment that was posted. Not a big deal, but if there’s something I can do to prevent that, I’d appreciate knowing it

That only happens to me when I switch tabs while I’m composing the comment. If I switch tabs then I have to delete the duplicate on the old tab.

I hadn’t noticed that, but I switch tabs moderately often, so that could be the key

Switching tabs is a good suggestion. Note that if you want to compose posts on a separate scratch pad, sending a PM to yourself is another way to do that.

You can have as many draft replies as you want (technically as many as there are topics), but you can only have one draft topic in flight.

Check your user profile for the drafts tab… we also added a draft count to the user drop down at upper right so you can tell how many you have in flight at any given time: 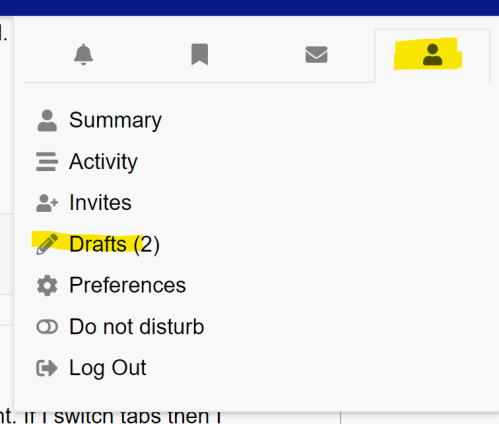 I’ve had that happen a few times, but usually refreshing the page makes it go away.

The problem isn’t losing drafts - it’s having drafts stick around even after the post is posted.

What I get sometimes is that, when (and if) I finally get around to finishing and posting the draft, I get a popup asking whether I want to post it in that thread or the original thread.

But that thread is the original thread; though I may have closed and re-opened the window between starting and finishing the post.

Hmm, in multiple tabs? Do you have any drafts right now? Tap your avatar, then tap the person icon… right now I have one draft, it is this post I am composing right now. I’ll submit it, and then look again…

edit: confirmed, after submitting the post it goes from

And now that I’m back in the editor, it’s showing one draft in flight again.

Hmm, in multiple tabs? Do you have any drafts right now? Tap your avatar, then tap the person icon…

Huh; it says I’ve got three, all of which I’d long since forgotten about. I don’t know whether I wound up posting a different reply in those threads, or thought I had posted the draft and for some reason it’s still showing as a draft, or whether I just decided not to post. I often don’t post something I started; maybe because somebody else first said what I was going to, or the thread has moved on and I’m not going to bother taking it back to the earlier discussion, or I needed to research something and didn’t get around to it, or I just decided not to get into that discussion with that person.

Multiple tabs may well have been involved; and I may have had more than one of them open at once, because sometimes I’ll leave a tab open intending to come back to it, but when I come back I start with the “unread” page, see it there, and open it again.

Testing an idea - I’ll be right back

ETA: I opened a tab, started the above post, opened a different tab, and submitted, and of course the original draft was still there in tab 1. Probably that’s my problem.

I just had it happen; the popup box I got said:

Which topic do you want to reply to/

– and when I looked I saw I had two tabs open to that thread at the same time. I posted as “reply here” and when I got back to the other window an earlier version of my post was still there in the edit window. I cancelled that one.

Apparently editing the post in one window didn’t also edit that same reply when it was also open in a separate window (same topic).

But I’m not sure why the Original Topic would show as “undefined”.

Oh yes the “undefined” is a bug. If you have a good set of steps to reproduce that outcome please let us know so we can fix it.

As near as I can tell:

Open a thread in a tab. Start a reply in that tab, but don’t post it; just leave it sitting there in the reply window.

After the thread’s moved on a bit, open it (from the Latest page, or from Unread, or wherever) in a different tab; while leaving the original tab still open. The started reply shows up in the newer tab also. Modify the reply in the new tab; then try to post it.

– if that doesn’t reproduce it, let me know, and I’ll play around with it a bit more.