In a footnote to Lynne Murphy’s Prodigal Tongue this post

Your Pronunciation In My Humble Opinion (IMHO)

Britain is renowned for taking foreign words and twisting their pronunciations so that they sound like they were originally English words. Hence abominations like tack-o for taco; Jag-you-er for jaguar, pass-ta for pasta etc. When Americans absorb a foreign word they attempt to hold onto the native pronunciation as closely as the English phonemes will allow them to.

is cited (the book uses the earlier link (pre the current board), but provides enough info for a search to find).

That’s cool!
Though, I made the same argument here on the SDMB about seven years ago, and was gently corrected by @hibernicus. They convinced me that the English phoneme æ (as in “cat”) was just about as close in the mouth to the mid-vowel a – the sound in Italian and Spanish words like “pasta” and “taco” – as the English phoneme ɑ (as in “bob”) is. This latter sound is most often how Americans pronounce these foreign words. We THINK we’re being more correct, and Gordon Ramsay sounds ridiculous to us, but it turns out we’re all about equally “wrong.”

(There’s no excuse for the extras syllable in the British pronunciation of “jaguar,” though!).

By an astonishing coincidence, last night I watched a YouTube video by Dr Geoff Lindsey that covered this exact point (the different ways American and British speakers nativise words such as “pasta”, and which, if either, is more correct). @JKellyMap, I think you might find it interesting. 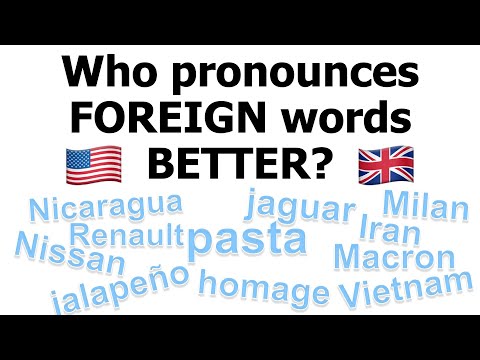 That’s pretty cool! I’m a colleague of Lynne’s—we have an in-person work meeting and dinner once a year. I’ll have to ask her about this next time—that is, whether she just stumbled across the thread while doing research for her book, or if she’s a regular reader of the SDMB.

Tell her I liked the book

Here’s the money shot from the video hibernicus linked to. Yup, just like we’d said: the real Italian vowel is about midway between the British and American approximations (time stamped):