The fun part is that several of the best SEC teams are young, and will be stronger next year.

I think it would be an interesting experiment to see what would happen if the two conferences picked a Saturday in the fall and simply matched themselves up top to bottom, half the games in SEC stadiums, half in Big-10 stadiums.

That would be fun, but it’ll never happen of course. It would also be nice to have more bowl game matchups between the Big 10 and SEC. Unfortunately, the Peach Bowl ties up a good SEC team every year and pairs them with an ACC opponent. Where’s the fun in that? I hate bowls with two conference tie-ins. It was always irritating to me when the Rose Bowl used to tie in both the Pac 10 and the Big 10, so that the SEC never got a crack at the best schools from those conferences.

It depends on which LSU team shows up. They’ve been infuriatingly uneven. If they bring their A game, OSU doesn’t stand a chance. But OSU is the more consistent team, from what I’ve seen.

And this is supposed to be their rebuilding year.

There is at least one team that could not.

I cannot believe that the Gators lost. We had every reason to CRUSH michigan. How did we give it away like that. cries

Um…couldn’t capitalize on 4 turnovers, perhaps? Seriously, when is the last time you saw a team go -4 in turnover differential and win? Taking the turnovers into account, and it’s pretty clear that Michigan outclassed Florida. As a Michigan guy, I expected Florida to at least be close, but it really wasn’t.

It’s worth noting that Florida had a lot of bad injuries along their defensive line.

Were we even watching the same game?

Well, but let’s keep it in perspective: In games between the Big-10 and the SEC, the record is 1 - 1, with the rubber match on Monday. And both the completed games between members of the two conferences were close affairs, showing that the Big-10 is quite competitive with the SEC.

I think it would be an interesting experiment to see what would happen if the two conferences picked a Saturday in the fall and simply matched themselves up top to bottom, half the games in SEC stadiums, half in Big-10 stadiums. Ole’ Miss could go scrounge up someone else to play and consider themselves lucky that day.

It’ll never happen. The SEC doesn’t travel at all. They play all their non-conference opponents at home and all the bowl games are in the south. The Big Ten and Pac 10 will play each other in the non-conference season and many schools play Notre Dame, but the SEC just refuses. They load up on the Coastal Carolinas and the Middle Tenessee States.

Florida last played a non-conference road game outside of the Sunshine State on Sept. 21, 1991, at Syracuse. They lost.

Georgia hasn’t played a game outside of the South since 1965. 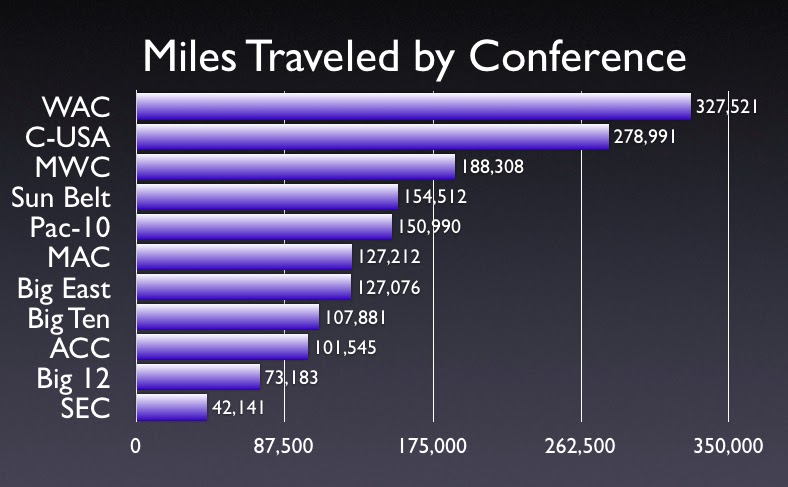 Who Travels, Who Doesn't

When the NCAA Board of Directors voted to add a 12th regular season game in major college football starting in 2006, the hope among fans was...

It’ll never happen. The SEC doesn’t travel at all. They play all their non-conference opponents at home and all the bowl games are in the south.

Not true. For example, Tennessee has had recent home /away series with Notre Dame and has played Cal home/away over the last two seasons.

Taking the turnovers into account, and it’s pretty clear that Michigan outclassed Florida.

There is no disputing that. On that day, at least.

In UF’s defense (and I can’t believe I, as a Georgia fan, would defend the Gators), I don’t think Florida took Michigan seriously (judging from pre-game antics). Sort of like Michigan didn’t take Appalachian State seriously.

Well, in recent memory (last 5 years or so), LSU has traveled to Virginia Tech, Arizona, and Arizona State. I think they alternate their “major” OOC games from home to away year by year (within that time frame they also played Oregon St. Fresno St. and Virginia Tech at home), so one “good” away game every other year seems reasonable.

Didn’t Tennessee travel to play Cal this year (or last)?

And that’s just off the top of my head. I’m sure other SEC fans can chime in and refute the “SEC refuses to travel” canard.

Georgia did put a whoopin’ on Hawaii

Seems like you’ve forgotten that Alabama, Auburn, Mississippi State, Kentucky are also in the SEC and all won their bowl games.

As for that “highly overrated” Badger team, didn’t they also kick Michigan during the season?

Michigan was not healthy for almost the whole year. Merely qb and running back Hart and much of the team. You have to be healthy to win.

Georgia hasn’t played a game outside of the South since 1965.

What does playing “outside the South” have to do with anything? The South is a big place, and a tough road game is a tough road game. Georgia has a long-running non-conference rivalry with Georgia Tech (you know, 5-time national champion Georgia Tech?), and had in the past had a long-running non-conference home-and-home series with Clemson, and a home-and-home series with South Carolina before they joined the SEC.

Georgia has future games scheduled at Arizona State, at Oklahoma State, at Louisville, at Clemson, at Oregon, at Colorado (and of course, at Georgia Tech).

Come back and talk to me when the Big 10 gets a conference chamionship game (yet another tough game, and another chance of blowing a shot at the national title).

And as long as you’re perusing Georgia’s past schedules, you might take note that Georgia has beaten any Big 10 team thrown at them in bowl games in the past 30 years. Ohio State, Michigan State, Wisconsin (twice), Purdue (twice). With a bonus victory over Notre Dame.

And this is supposed to be their rebuilding year.

This is Ohio State’s rebuilding year too. Depending on how many Juniors leave, we should be better next year too.

Been on vacation so I apologize for the late response but I was thinking about this thread ever since the BCS Title Game.

So, how’s the SEC looking now?

So, how’s the SEC looking now?

It’s worth mentioning that 10 of those 23 wins against the SEC were against Vanderbilt.

Anyway, I’m a bit confused on where you’re getting your numbers for 23-5-1 against the SEC.

The losses are fairly easy:

That gives us 5 losses, which is consistent with your claims (although I don’t feel it is accurate.)

Michigan has tied Vanderbilt once, which is consistent with your 1 tie.

Wins though, I’m a bit confused.

That gives us 19. Well, I have an idea as to where you’re getting your other wins.

Michigan is 3-0 against Tulane and 1-0 against Georgia Tech, two teams that USED to be in the SEC. I’ll give you the win over Tech, Tech was in the SEC when Michigan beat them, so that’s a fair claim that it was a win over an SEC team (though it’s mega cheesy, it was in the 1930s for god’s sake.)

That would bring us to 21-5-1, since in fairness I don’t think we can count two wins over a team that was clearly not a member of the SEC ('21 Tulane and '72 Tulane.) At the same time, I’m not sure how you can count the win over South Carolina, since it happened before South Carolina entered the SEC. Also in fairness, the one loss to South Carolina came when South Carolina was not in the SEC. So Michigan’s record against SEC teams, from what I can see, is actually 20-4-1. (Note that this is fewer wins but actually a higher winning percentage versus the SEC than your claim of 23-5-1.)

Still, it’s worth noting that Michigan has only beaten an SEC team 20 times in its history, and that half of those wins were against Vanderbilt.

I could be wrong though, I’m just going from College Football Data Warehouse and easily could have miscounted, I’ll be happy being corrected if that’s the case :).

Well, the news services reported the record as 23-5-1 against the SEC; you’d have to find out what source they were consulting.

And, for the record, it seems quite obvious this year that the SEC was a better conference top to bottom than the Big-10. They certainly outperformed them in the bowl games.

Well, the news services reported the record as 23-5-1 against the SEC; you’d have to find out what source they were consulting.

And, for the record, it seems quite obvious this year that the SEC was a better conference top to bottom than the Big-10. They certainly outperformed them in the bowl games.

But anyway, I’ve dug some more, and believe that the 23-5-1 record is even more significantly inaccurate than I had originally assumed.

I’m going to give a brief overview of Michigan’s record against EVERY team, past or current of the SEC. Games that happened while said team was actually a member of the SEC will be highlighted in bold. The overall record will be in normal text and the true record of Michigan versus that team as an SEC member will be in bold.