Seen this site yet? *WARNING* Possibly TOO funny!

Presented without any sort of fanfare…

I just watched my SO go through forty plus pages on this site and he was laughing so hard I thought I was gonna have to do CPR on him–and this is NOT a guy who’s known for falling out like that. I sure wish I had a video of him, because I’d caption it:

Enjoy–and do feel free to link your favorites.

This one also has a certain je ne sais quoi…

To each his own, I guess, but it did nothing for me.

That rocks. I really love the fail fail. (bluescreen)

The “fail” pic featuring the pregnant woman smoking while complaining about construction noise harming her baby is a classic.

Yikes. Some funny pictures, but in many of those cases, “Fail” is the lazy man’s caption.

So, you’re saying that we could improve the captions?

I recognized many of those pictures as having come from the Navy Safety Center’s Photo of the Week site.

Which is where I found this one.

I haven’t seen The FailBlog site but these photos are often posted on FARK. For some dumb reason, this one cracks me up.

Yikes. Some funny pictures, but in many of those cases, “Fail” is the lazy man’s caption.

Agreed. They should put at least one modifier before the word “fail,” at least.

Wow. The first entry I saw contained a pretty obviously fake e-mail along with the text “the winning reason (or failing reason) for posting is that the picture seems to show a skunk in someone’s home.”

To each his own, I guess, but it did nothing for me.

The comments are almost as inane as those on YouTube. Almost.

Not all of them were hilarious, and some are setups. Still, I got some good larfs out of it. 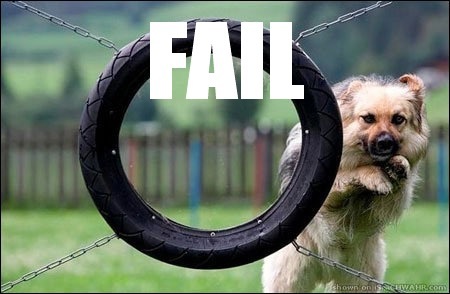 Agreed. They should put at least one modifier before the word “fail,” at least.

You mean like in this one or this one?

There has been a Fail explosion for the last few months. Everywhere I look, Fail. Some of them are funny but the abundance of crappy ones has really watered down the meme. It’s beginning to - if you will - FAIL.

There were some that were cute but a lot of obvious set ups and the ones where someone is getting injured through no fault of their own just made me feel bad. Maybe a third amusing, a third that prompted “Huh?”, and a third that the entry itself was a failure.