It looks very promising, and if they can match the tone of the comics (which it seems like they’re trying to do) it could be a lot of fun…

…but oh, that CGI. It’s easy enough to ignore dodgy CGI when it’s not essential to the story, but this is (half of) the main character we’re talking about. Hulk looks decent enough, but he has an extensive movie library behind him. She-Hulk … does not look decent enough. She’s deep in the uncanny valley, and her expressiveness comes off as pretty iffy.

These are undoubtedly not the final effects, as they still have three months of postproduction left - but then again, I’m sure the budget is not movie-scale either, and it’s nine 30-minute episodes with two or three of the principle characters being CGI, so … I’m starting to get a bad feeling about this. I hope I’m wrong.

Law & Order: MCU:
“In the cosmic justice system there are two groups: the sorcerer/inventors, who create problems; and the plucky superpowered idealists, who fix them. These are their stories.”

This promo looks terrible, and as good of an actress as Tatiana Maslany was in Orphan Black and Perry Mason, she can’t save this by personality alone.

Agreed about the CGI. But I think the Hulk looks better also because he’s not trying to look like a regular human. She-Hulk looks like she should be a real (buff) woman, so she looks off.

Honestly, I think it would work better if they did the opposite: getting a buff woman and using clothes + CGI to make her look less buff. Maybe they could accentuate her buffness, but creating it out of the full cloth doesn’t seem to work. It doesn’t blend with everything else.

That CGI would barely be acceptable in the 90s. Wow.

In the modern comics, Howard the Duck’s detective agency and Jennifer’s law office are in the same building, and they interact a lot. So, please?

I wonder if she’ll break the fourth wall as often as John Byrne’s version did.

She-Hulk’s CGI legitimately looks like a skinnier Fiona from Shrek 2. The CGI is horrendous.

The premise looks fun but yeah, the CGI is going to be offputting.

I don’t see what’s so horrible about the hulk cgi, I’ve seen worse.

It would be pretty impressive if this was 1995 and on the USA Network.

That CGI would barely be acceptable in the 90s. Wow.

What did we have on television in the 1990s that looked as good as She-Hulk?

You got me! Your internet award is in the mail.

I haven’t been this excited since Marvel Comics awarded me a No-Prize in 1982 for pointing out a continuity error. In the Amazing Spider-Man, issue 233, Noose Norton had brown hair. But a few issues earlier, he quite clearly had blonde air. I explained away that continuity error by saying Noose had been in disguise from gangters who were looking to collect on his gambling debt. And, yes, I’m as amazed as you that I managed to get married.

Babylon 5 was probably the show for cutting edge television CGI in the 1990s, and that hasn’t dated entirely well. She-Hulk looks better than that, but is still heavily in the Uncanny Valley with regard to an effect that pertains to the main character and is going to be onscreen a lot. 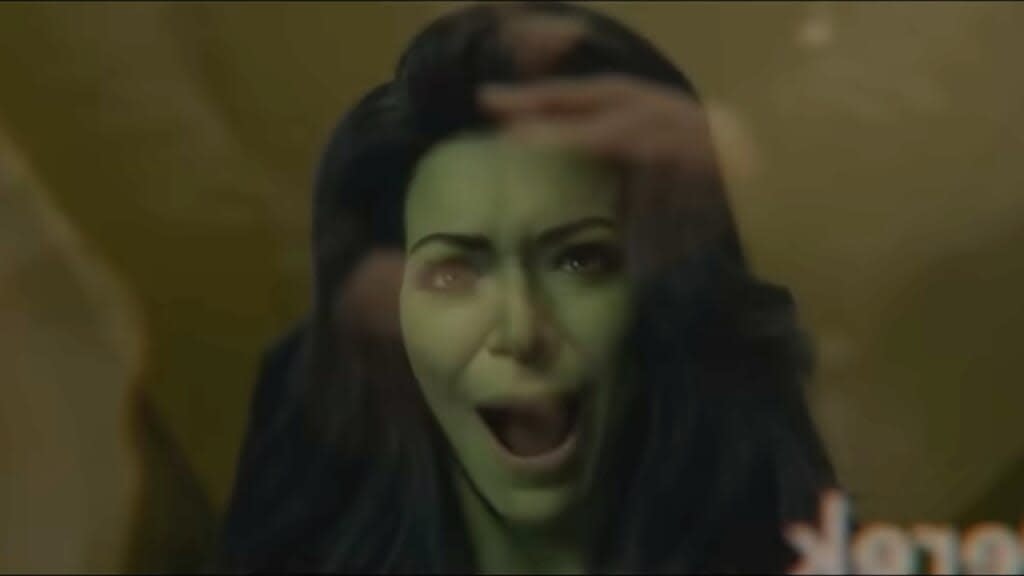 Marvel drags She-Hulk into the "Sonic the Hedgehog" zone

It’s weird that it finally twigged with me whilst I was IVing caffeine this morning, but another watch of the trailer made me reinterpret a line to what was probably intended. When She-Hulk talks about superheroes being billionaires and narcissists, and adult orphans for some reason, I immediately thought ‘Batman and Iron Man.’ But this morning my brain saw it as ‘Oh, she’s riffing on her Orphan Black days.’

Which begs the question, at what age do your parents die and you’re not considered an orphan?

Which begs the question, at what age do your parents die and you’re not considered an orphan?

By definition, an orphan is a child. So if you’re an adult when your parent dies you’ve never been an orphan.

My mother took a 5am call, turned to my dad and said “Honey, you’re an orphan.”

(Note: HE’S usually the one who would make jokes like that. So he laughed. And by way of explanation, his mom died early; the phone call was when he was fifty-ish, and his dad had been circling the drain in a home for ages)

But back on topic: I loved her “orphan” line… I immediately thought that it fit Batman and Superman and Orphan Black.

I hope the CGI was a rough cut, and we don’t have to protest like Sonic fans did… but that worked!

Some fans were less than pleased with the original.